Disney Parks Quiz: Which Resort is MISSING Each of These 8 Classic Rides? 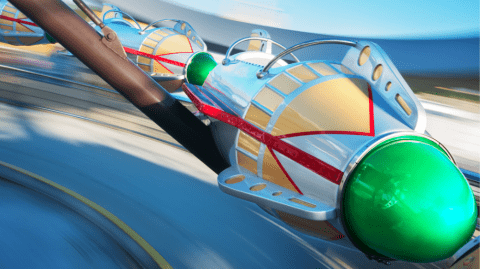 For most Disney Parks and Imagineering fans, explaining the differences between Disney's resorts is like an art. Disneyland is quaint and charming and naive; Walt Disney World is grand and organized; Disneyland Paris is elegant and rich and romantic...

Yet despite the nuances that fans lucky enough to travel the world can identify, the truth is that Disney Resorts do have a lot in common - not only because all have "castle parks" that are (to varying degrees) recreations of the original Disneyland, but also because many 'classic' attractions are today viewed as must-haves. What Disney resort could exist without Peter Pan's Flight? A haunted house? Rocket jets? Would you believe some do? Today we're quizzing you on which resorts are MISSING some "classic must-have" attractions...! Think you can get all 8?

Think you've got the answers? Read on to find out...

Q1: Which resort DOESN'T have a Buzz Lightyear dark ride?

If you've noticed a serious uptick in the "Pixarification" of Disney Parks, you're not alone. In fact, we told the full story of Pixar's theme park rise in a must-read DISNEY•PIXARLAND feature. Though the Buzz Lightyear laser-blasting dark rides (based on Toy Story 2) weren't the first Pixar attraction to join the Disney Parks lineup, it's by far been the most infectuous, spreading across the globe from resort to resort, always taking up residence in Tomorrowland (and sometimes, replacing classics with its cartoon style). 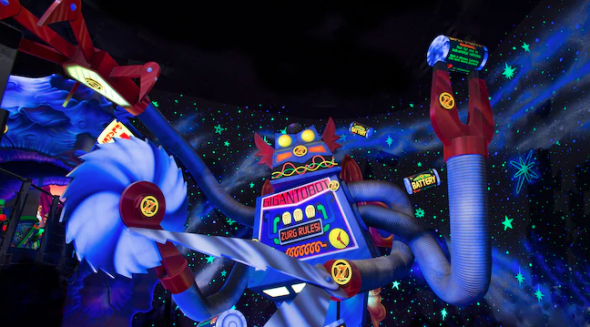 A1: Hong Kong Disneyland. When the young and underbuilt park failed to make waves in the lucrative Asian market even after an aggressive expansion project adding three original mini-lands, Disney doubled down on their investment. The park's latest projects include a major reimagining of its central castle, the addition of a Frozen-themed mini-land, and the annexing of part of Tomorrowland to create a new Marvel super hero-themed land.

The first part of that new Marvel land came online in early 2017 with the opening of the Iron Man Experience – Disney's first official Marvel ride. Buzz's ride became another: Ant Man and the Wasp: Nano Battle! Reusing Buzz's track and slow-moving ride system, the Omnimover predictably miniaturizes guests to (you guessed it) ant size to infiltrate an army of nano-bots and explode them from the inside out. Despite the promising premise, the ride has been widely criticized not just for re-using such a passive and slow ride system in a "high action" story, but for lacking any kinetic energy or... well... action. The static ride re-uses much of Buzz's infrastructure but if you can believe it, Buzz might've used it better!

Q2: Which resort DOESN'T have a haunted house?

The story of the Haunted Mansion is about as legendary among Imagineering fans as the ride itself. The first major project undertaken without Walt's explicit guidance, the 1969 dark ride is a fascinating combination of differing ideas. The ride infamously fuses an atmospheric, eerie, and generally unsettling opening act with a character-filled singalong second act that really have no right to feel as natural together as they do. 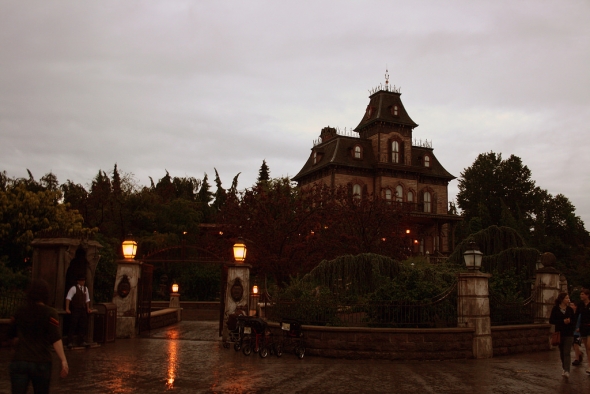 The Haunted Mansion is also famous for the fact that in every Disney Park it's appeared in, it's never been in the same land twice. The ride has evolved and changed as it's spread around the globe. In Disneyland Paris, the ride was completely reimagined to fit into the narrative of the park's Frontierland, becoming the Modern Marvel: Phantom Manor. For our purposes, we'll also count the ride's spiritual sequel in Hong Kong, where a monkey and a magical music box transform a home of oddities into absolute mayhem – the Modern Marvel: Mystic Manor. 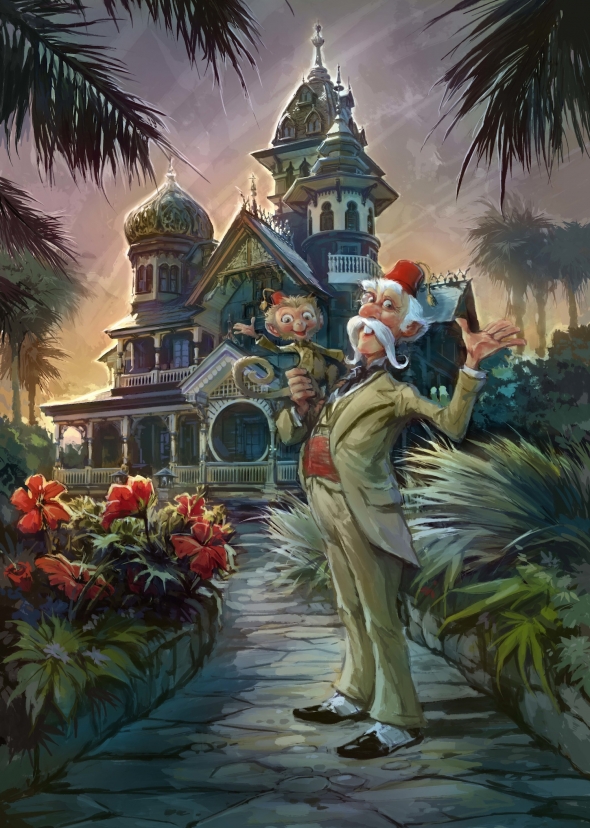 In other words, a creepy old house on a hill is a staple of each resort... except one... Have you used process of elimination yet?

A2: Shanghai Disneyland. Insiders say that the Shanghai government (who partially owns Disney's mainland China resort) explicitly barred Disney from duplicating any of its tried-and-true E-Tickets, instead requiring that entirely new, original anchor attractions be designed for the park. In any case, a Haunted Mansion wouldn't have made the cut, at least in part because of China's cultural taboo around the idea of "ghosts." But in Shanghai, Disney didn't even "reinvent" the concept as they had with Mystic Manor. Instead, Shanghai's park is simply without a haunted house at all.

Q3: Which resort DOESN'T have a circling rocket ride?

Though Disneyland didn't open with a circling rocket ride in Tomorrowland, the Astro-Jets were added before the park's first birthday, in March 1956. The original swirling ride was mechanically identally to Fantasyland's Dumbo The Flying Elephants. After a decade, the Astro-Jets closed to be replaced by the iconic Rocket Jets – swirling white rockets circling high above Walt's New Tomorrowland on the third story of a space age pedestal at the land's center, just above the Lost Legend: The Peoplemover. 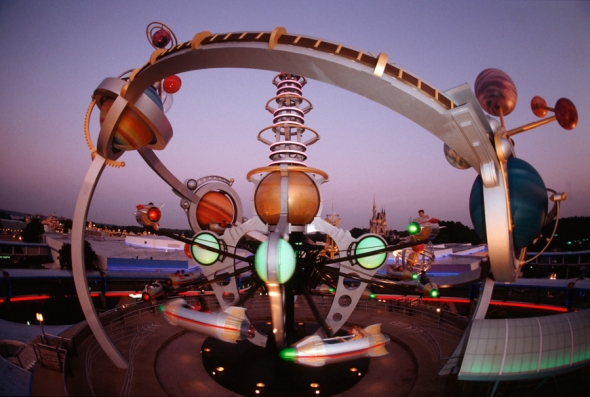 The absolutely iconic idea of swirling rockets atop a pedestal has become synonymous with Tomorrowland, and the same arrangement was used in Magic Kingdom in 1971 (re-decorated in sci-fi ornamentation in 1994, above), then Tokyo Disneyland in 1983. When Disneyland Paris opened in 1992, it, too, featured a rocket ride, albeit made of gold, stylized as a Renaissance astrolabe, surrounded in rockwork, and embedded in the earth – a better fit for the European park's fantasy-inspired retro-future. Disneyland followed suit, grounding its own rockets with a clone of Paris' as told in the ill-fated Declassified Disaster: Tomorrowland 1998. 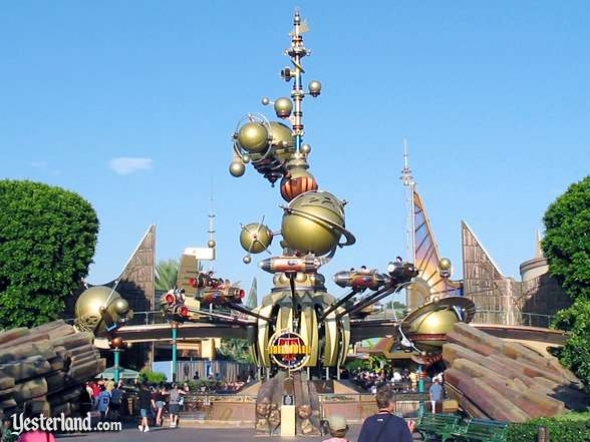 Hong Kong's version of the ride isn't on a pedestal and uses flying saucers instead of rockets, but otherwise mostly resembles the sci-fi Magic Kingdom version. When Shanghai Disneyland opened, its Tomorrowland was stylized far differently than any other... But even there, the thrilling Jet Packs are essentially the same attraction, and even set on a hillside, cantilevered plaza echoing the pedestal placement of old. But wait... that's every resort, right? So which is missing this quintessential Disney Parks experience?

A3: Tokyo Disneyland. Even though Tokyo Disneyland never had a Peoplemover, its StarJets attraction was still hoisted high above the land on a pedestal. And unlike the U.S. Tomorrowlands that diverged into sci-fi and fantasy ornamentation, Tokyo's StarJets retained a classic Space Age appeal: mini white passenger rockets circling around a central white rocket with a red USA emblazoned on the side. 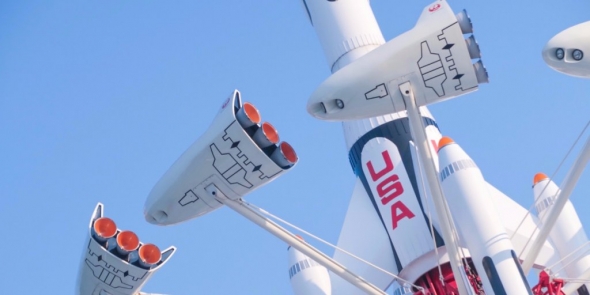 The ride was closed in 2017 along with the park's Raceway, making way for a massive rebuild that will carve an enourmous piece of property for a Beauty and the Beast inspired New Fantasyland, as well as a new attraction for Tomorrowland. It's incredibly rare for a Tokyo Disneyland ride to outright close, so you can bet that the loss of the StarJets was met with plenty of pomp and circumstance including a StarJets: The Last Mission marketing push and a resounding StarJets Forever nostalgia campaign.