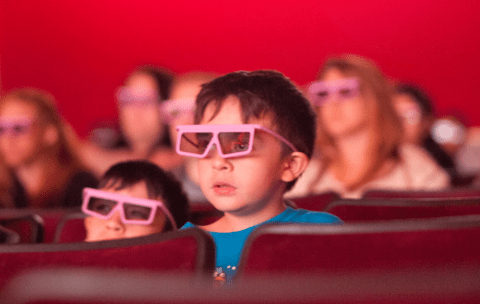 Once upon a time, theme parks were showcases of the unthinkable.

From Walt’s New Tomorrowland of zipping, gliding Monorails to EPCOT’s Future World of technologies merely dreamed of, the spirit of innovation and invention has always been at the heart of Disney Parks. Highways. Circlevision. Peoplemovers. The House of Tomorrow. Innoventions. RFID. At every step, Disney has been ahead of the curve, incorporating burgeoning concepts and smart technologies both on stage and behind-the-scenes...

But… times change. And in Disney’s case, technologies that it pioneers or popularizes tend to become imitated… or at the very least, mainstream. Today, we’ve collected five technological “gimmicks” that used to be theme park must-sees… but now, can be found at your local museum, zoo, amusement park, or even mall. Take a look and let us know… are you “over” these one-time marvels? Or do some still have a role in Disney Parks and beyond?

3D has been around for a surprisingly long time, technically becoming real in 1915. The “Golden Age” of 3D films is said to have begun in 1952 – a few years before ground was even broken on Disneyland. That said, 3D underwent a substantial “Rebirth” in the ‘80s due in part to the opening of EPCOT Center. Yes, “Magic Journeys” in the Imagination pavilion was a cutting edge, modern example of 3D – a larger-than-life showcase no local cinema could match, and something you'd be willing to visit Disney World to see in person.

In fact, 3D movies became somewhat synonymous with theme parks in the ‘80s and '90s, with a rotating showcase of custom-made films that dazzled audiences well beyond just Disney Parks. When Disney California Adventure opened in 2001, it brought along two 3D theaters – “it’s tough to be a bug” and Muppet*Vision. In retrospect, the New Millennium had been the height of the 3D “gimmick,” with science museums around the country adding 3D “giant screen” theaters.

3D didn't disappear. Instead, it went mainstream. Arguably, the format peaked with 2009’s AVATAR (which owes at least part of its box office success to the gotta-see-it-in-3D upcharge), then endured a steady decline in the early 2010s. Once envisioned as the inevitable “next step” for film and home theaters, 3D has largely become a relic in the U.S. Even at Disney Parks, it seems unlikely that a genuinely “new” film will ever be created for the dusty 3D theaters left. Instead, they’re used for extended sneak peeks of upcoming films or playing Disney and Pixar shorts. Most embarrassingly, Disney California Adventure’s MuppetVision theater was repurposed to play the decade-old Mickey’s Philharmagic just last year. Speaking of which..

Disney didn’t just play a role in reviving modern 3D; they followed it up with something even wilder. As the story goes, the notion of “4D” films arose within Disney Parks, too… We call the Lost Legend: Captain EO the $17 million music video that changed Disney Parks forever… but believe it or not, it might’ve changed the entire concept of entertainment along the way.

A pop culture mashup of Disney, George Lucas, Francis Ford Coppola (director of The Godfather), and Michael Jackson, Captain EO was the true start to Michael Eisner’s “Ride the Movies” era. But it owes at least part of its landmark status to Rusty Lemorande (producer of Caddyshack and writer of 1984's Electric Dreams) who embarked on a quest to go beyond a 3D film. It was Lemorande’s idea to incorporate in-theater effects like lasers, LED starfields, and fog that would literally extend what was seen on screen into the physical theater... which is why he's often called "the father of 4D."

As we know, “4D” became a gimmick in and of itself, quickly finding its way not only into every Disney 3D film thereafter, but into its competitors. If you're at a theme park, sitting in a theater, with 3D glasses, it's practicaly second-nature to brace yourself for poofs of air, spritzes of water, fans, vibrations, smells, jabs, tickles, and wind. Swing by Universal Studios where you’re promised a spritz of water and a blast on air on practically every ride and show in the park. Better yet, stop by any zoo, mall, or aquarium and you’re likely to find a “4D” adventure that’s all too happy to spray you in the face.

Okay, so - 1982, Disney helps revive 3D; 1986, Captain EO adds a new dimension; and just a year later in 1987, our third once-novel invention arrives: the motion simulator. A longstanding dream of Imagineers, the ATLAS (Advanced Technology Leisure Application Simulator) was only made realistically possible in the ‘80s, literally applying flight-training technology to a high-capacity, entertainment-focused application.

It was all brought to life in the original version of the Lost Legend: STAR TOURS. With guests strapped into a pod supported by hydraulic arms, this groundbreaking attraction perfectly synchronized an in-cabin projection screen “window” to sweeping, tilting, soaring motion, placing guests inside the Star Wars universe. As we chronicled in a full industry insider feature – Artificial Worlds: The Rise of Screens at Theme Parks – the technology spread quickly, first to fellow cabin simulators (like fellow Lost Legend: Body Wars) and then to new applications altogether. Rides like the Modern Marvels: Indiana Jones Adventure, Soarin’, Back to the Future: The Ride, and The Amazing Adventures of Spider-Man all build off of – and show the versatility of – the simulator technology pioneered in Disneyland.

Still, simulators aren’t quite as exclusive as they used to be. This is another experience that’s flooded into tourist attractions, typically as pay-per-ride add-ons. Where once you couldn’t get the mind-blowing experience of a simulator anywhere but theme parks, today you can find cabin simulators in science museums, hang-gliding simulators in malls, and more.

Great article, but I spotted a typo: the actor's name is Michael Jackson, not "Michawl Jackson".