5 Ways Disney’s Operations Are Making Their Parks Worse, Not Better 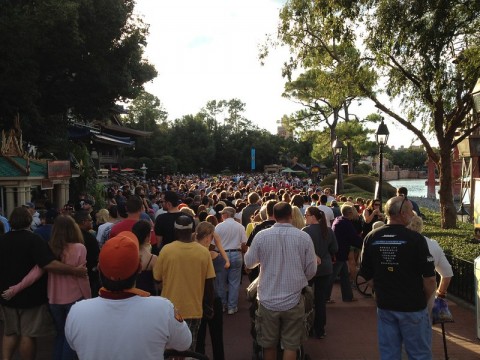 If you’ve ever been to Walt Disney World, then you likely have a hard time going to regional amusement parks around the country. They’re fun, yes, but they always seem to have something … missing.

There’s actually quite a few things missing, really, when you compare the two. For one, background music tends to be a bit less atmospheric. For another, theming often gets neglected or even removed over time. But the most glaring difference, in my mind, is with the level of care and dedication within the operations team.

It’s really hard to run a theme park or an amusement park. With so many people trying to do all the same things at the same time, managing those crowds effectively while ensuring everyone has a nice time requires the herculean efforts of a team of thousands. It’s an intricate dance, making sure each vehicle is loaded and dispatched swiftly, deploying parades and shows at strategic times to lure guests away from crowded areas, turning over tables and areas so the next set of guests can enjoy the same experience. For decades, no one has managed that task quite as well as Disney.

But, while many things at Disney have been getting better and better, for some reason, operations seems to be in the midst of a bizarre overhaul. Perhaps it’s due to the sudden transition of Walt Disney Parks and Resorts President Bob Chapek into the CEO role for the entire company. Perhaps it’s due to some other invisible force. But, whatever the cause, what’s clear is that the parks feel more crowded, lines feel longer, and the general level of smoothness has dramatically declined.

Why? Let’s look at a few possible reasons.

For most of Walt Disney World’s history, when you bought a park ticket, it was a pretty simple concept. You gave Disney money for a one-day ticket, let’s say, and they gave you a piece of paper that gave you access to one of its parks for the entire day. If you wanted to show up right when it opened and stay until it shut down, you could do that. If you wanted to arrive at noon and go home in a fit of exhaustion at 5:00, you could do that too.

But, over the last several years, Disney has made the concept of “park admission” ever more complex. Now, when you buy a ticket, there are several caveats: Is there a hard-ticket event in the morning of evening that my ticket won’t let me into? Have I purchased a ticket for the right theme park? Is this ticket I bought actually good for the day I’m at the park?

Moreover, Disney’s parks have, for years, had long hours to accommodate as many guests as possible. On some days, parks have opened just after sunrise and don’t close until well after midnight. But, recently, it seems like such days come less and less.

Disney’s Hollywood Studios, in particular, has been the center of many of these frustrations. Despite opening the most popular theme park expansion on Earth with Star Wars: Galaxy’s Edge, the park itself rarely stays open past 8:30 PM. This, when the Magic Kingdom also rarely stays open past 10:00 PM – the latest closing time during this busy season – actively makes the parks feel more crowded, as guests are forced to cram their tours into smaller time frames.

The main reason Disney has had such good operations for years while regional parks can’t keep up is actually pretty simple: Good operations cost money. It’s much easier to employ highly trained staff in several shift segments when you’re one of the biggest entertainment companies on earth. It’s a much harder task when the bottom line for your company is missing a few zeroes.

But, the curse of modern market economics requires even the most successful companies to show not only that they make a lot of money, but that they’re making more money today then they did a few months ago. And so, once you’re as big as Disney, you start having to shave off costs in uncomfortable places.

One such spot is in Walt Disney World’s entertainment offerings, which are dwindling by the month.

It’s actually pretty interesting. You see, attractions obviously cost an awful lot of money to construct, but once they’re built, the costs of running them are relatively small (usually). Shows and entertainment are a bit different, because while the startup cost is much smaller than an attraction, the ongoing cost of talent can make a show feel more expensive to run. Obviously, a band performing in the Morocco Pavilion isn’t anywhere near as expensive as Millennium Falcon: Smuggler’s Run to operate. But, fewer people also engage with it in a day.

So, to some in the company, it’s a question of value-added, and as such, a lot of shows have gotten the axe in recent years, or have been scaled back in how often they’re offered. The problem with this is that shows and events often pull guests away from other headlining attractions, keeping the crowds more evenly distributed throughout the parks. In fact, this was a promised innovation of My Disney Experience when it was launched – Disney argued that it could see where crowds were getting too heavy and deploy a spontaneous dance party or parade to an area nearby to entice guests to spread around more evenly. That never came to pass.

Yes, the parks feel more crowded today, and it’s because guests tend to go to the same handful of experiences – in part because there’s simply fewer things to do overall.

One of the biggest factors in guest satisfaction is how many rides they experienced in a single day. While those of us who fancy ourselves experts at navigating the parks can hit upwards of 15 or 20 attractions in a day without breaking a sweat, first-time guests often report woefully low numbers. One of the biggest reasons for this is, of course, waiting in line.

Disney has, throughout its history, masterfully figured out ways to increase throughput in its attractions to absurdly high levels. Carousel of Progress, for example, was designed specifically so that as many guests as possible could see a lengthy stage show. Yes, the rotating theater is fun – but it’s also practical.

But, when you look at Walt Disney World, it’s kind of scary to realize that its five highest-capacity rides were all conceived right around Walt Disney World’s opening if not long before. The Tomorrowland Transit Authority, Carousel of Progress, the Haunted Mansion, Pirates of the Caribbean, its a small world, all boast large capacities – and two of the five were designed over half a century ago.

But gone are the days of Disney innovating in the areas of capacity. Millennium Falcon: Smugglers Run has roughly half the capacity of Carousel of Progress. Star Wars: Rise of the Resistance, despite seemingly accommodating larger groups, isn’t actually that much higher. Now, yes, intimate ride experiences often have lower throughput, and that’s a tradeoff that’s worth it on rides as magical as those two. I understand that.

However, Disney has gone all-in on these types of rides, at the cost of people-eaters like the Universe of Energy and even the Studio Backlot Tour. That’s to say that those rides shouldn’t have been replaced, but Disney should be far more concerned about overall attraction capacity than it currently is.