So You Want to Dress Up to Visit Star Wars: Galaxy's Edge... Here's What We Discovered First Hand About "Batuu-bounding".

Untangling Disney’s costume rules can seem a task more intimidating than wrestling a Gundark… especially when it comes to Star Wars: Galaxy’s Edge.

More and more, guests are looking for ways to enjoy Disney parks in costume. Immersion has become a major theme in the parks, and dressing up to visit embraces this full force. Unfortunately for would-be cosplayers, Disney has some heavy restrictions on costumes—specifically that guests over the age of fourteen aren’t allowed to wear them.

This policy makes sense as there are some real dangers that could occur if kids were to confuse a non-cast member with an official character. The most common ways guests have safely gotten around this has been through Disneybounding—a fan trend where guests come up with creative outfits from modern and vintage clothes that may tribute to Disney characters without being full costumes.

With the landing of Star Wars: Galaxy’s Edge at Disneyland and Walt Disney World, Disney had to revisit this policy—the reason being that costumes are a long, long standing tradition among Star Wars fans. There are whole fan organizations like the 501st Legion dedicated to the replication and creation of accurate Star Wars costumes. With their plans for wandering characters, Disney couldn’t have hundreds of unsanctioned X-wing pilots and Chewbaccas walking around the park, but they also wanted to embrace the immersive role-play nature of Galaxy’s Edge. 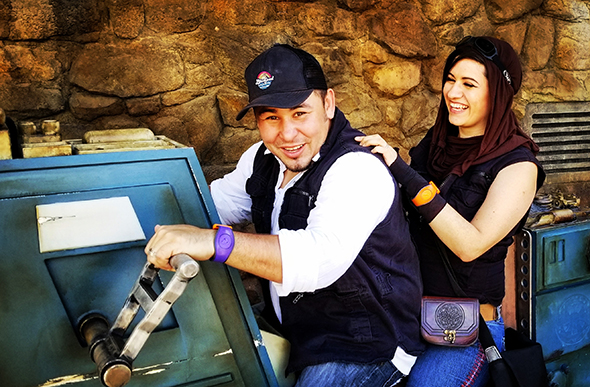 Their solution was a modification of the costume policy. Disneybounding is still allowed (outfit tributes to known Star Wars characters are fine so long as they aren’t full costumes), but they added a whole new version of it guests can enjoy—dressing as a local on Batuu. Some fans have taken to calling this Batuu-bounding, and it is an absolute blast. You need only look up #galaxysedge or #batuubound on Instagram to find dozens of great examples of this practice, from costumes themed around smugglers and Batuu natives to Jedi and Sith.

Unfortunately, there are still a lot of restrictions on Disneybounding and Batuu-bounding, and it has left many guests totally confused. Some fans reported showing up at Disneyland in supposedly-approved costumes and were bounced by security. Others have tried supposedly-banned outfits at Walt Disney World and were let through with no issue. Even stranger, some baffled guests online got the impression you couldn’t get into Galaxy’s Edge without a costume. What is and isn’t actually allowed? Jedi Robes? Face paint? How close can you get to character costumes? What if you have admission to Mickey’s Not So Scary Halloween Party?

How does Batuu-bounding affect your visit to Walt Disney World or Disneyland? 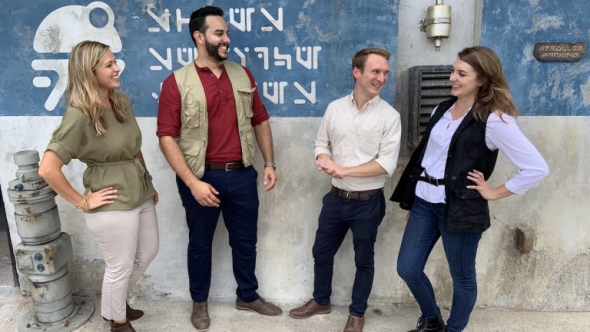 I will admit I’ve become absolutely hooked on Batuu-bounding at Walt Disney World. As a fan of Star Wars MMORPG’s and a former Renaissance Festival worker, dressing up for Galaxy’s Edge is absolutely my happy place. I’ve dressed as a random smuggler for all of my Batuu visits, and wearing a costume definitely has some cool effects on your time in the Black Spire Outpost—even beyond being able to get some amazing photos during your visit.

Both Disneybounding and Batuu-bounding are likely to get you a little more interaction with cast members during your visit. It’s like a signal that tells them you’re ready to play in the world of Batuu. Some guests are very uncomfortable with the immersive elements of the land, so cast members sometimes err on the side of caution with guests who seem squeamish. Dressing up tells them you are up for some in-world fun! The cast at Docking Bay 7 have always been especially nice to us when we dress up, as have those at Dok Ondar’s Den of Antiquities. You may even get to enjoy some interesting interactions with wandering characters. Most notably, I was stopped by Kylo Ren during a recent visit while in a scoundrel costume. He tried to read my mind. I’m guessing he caught up on a lot Theme Park Tourist features straight from my brain…

Dressing up for your Galaxy’s Edge visit does come with a few minor downsides to be aware of. Many costumes come with trade-offs compared to casual clothes. For example, my husband doesn’t like to always Batuu-bound because the vest for his costume gets insanely hot. Heavy or layered costumes may leave you cooking under the Florida sun, so choose your outfits wisely. Also keep in mind the shoes you are wearing. When I do full Star Wars cosplay for events, I usually wear world-appropriate boots, but I don’t have any comfortable enough for long walks in Walt Disney World, so I adjust my costume to include hiking boots instead. You may have to make some choices between costume and comfort, and when it comes to your feet, I always recommend comfort at Disney parks.

Finally, be aware that the more elaborate your Disneybound outfit, the more likely you might be screened extra at security. My scoundrel outfit includes belt pouches that are essentially fused to my hips because of the width of my belt and tiny belt loops. At Disney’s Hollywood Studios, they’ve always allowed me to just open these and prove they are empty, but when I tried to wear this outfit to Epcot, I got stalled at security because they wanted me to take the belt pouches off. They let me go when they realized I really couldn’t get them off easily, but this was a small snag and is something you should remain cognizant of. 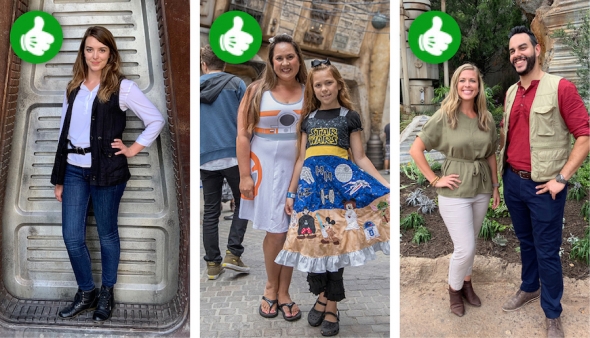 As we mentioned, there are two approved ways for the average guest to dress up for their visit to Star Wars: Galaxy’s Edge: Disneybounding in tribute to a known Star Wars character or Batuu-bounding as a local.

If you’re wondering why we’re differentiating Disneybounding from Batuu-bounding, its because the former is actually a lot easier to get away with. Disneybounding has to do with making outfits that are tributes to known characters, but they don’t necessarily have to look like in-world costumes. They certainly can so long as you use modern or vintage clothing styles and don’t look like an official Disney character. We’ve seen all sorts of wonderful ideals for Disneybounding, from beautiful summer dresses patterned after the style of Padme or Princess Leia to a fabulous pant-suit patterned after C-3PO. Han Solo and Rey seem to be the most popular choices since their costumes are easy to imitate and walk a grey area in between Disneybounding and Batuu-bounding. Indeed, we saw so many Rey outfits on opening day that we started to joke they must be her handmaidens dispersed to confuse assassins.

The other option is that guests can dress as a Batuu local (or in-world visitor)—aka Batuu-bounding. These outfits generally consist of tunics, vests, or jackets in earthy tones, but that’s just the basic concept Disney suggests. Dressing as a Batuu local leaves A LOT of grey area for costume ideas since the Black Spire Outpost and its denizens have an extremely colorful history, meaning your outfit can be based on just about anyone you want from scoundrels to resistance loyalists to First Order flunkies. The costumes are astonishingly easy to put together thanks to the earthy, layered styles common on Batuu, so this option opens a lot of doors for fans who want to try out dressing up without committing to a complicated outfit.

So I'm having a hard time finding anything about kids costumes. My 10 year old daughter wants to dress as Rey with her Rey staff and lightsaber. I read lightsabers are allowed, but will she be able to take her staff in?