Star Wars: Galaxy’s Edge is capturing the imagination of fans at both Disney’s Hollywood Studios and Disneyland. It seems every day, guests find new secrets, Easter eggs, and hidden tales woven into Batuu’s Black Spire Outpost, and we’ve only begun to scratch the surface on these.

Some time back, we theorized that the immersive concepts for Galaxy’s Edge sounded extremely similar to a live action version of an MMORPG video game, like Star Wars Galaxies or Star Wars: The Old Republic. This theory turned out to be completely true, even down to guests being able to partake in “side quests” using the Star Wars: Datapad app. Encouraging role-play isn’t something completely new to Disney, but the way they’ve embraced it at Galaxy’s Edge has made for an incredibly interactive experience. Indeed, a visit to the Black Spire Outpost can prove so immersive, that it actually holds a lot in common with another popular entertainment experience.

Galaxy’s Edge is a basically a Star Wars Renaissance festival…

For those unfamiliar, Renaissance festivals are popular celebrations where artisans, re-enactors, and performers recreate the experience of a Medieval or Renaissance era faire. Some faires are more historical in nature while others embrace epic fantasy and multiple eras. Almost all faires hold common elements of immersive entertainment, encouraging role-play between guests and performers, the sale of hand-crafted wares, and hands-on activities to experience the historical world.

I had the pleasure of working for the Colorado Renaissance Festival with my husband many years back, during which we got to experience Ren-faire culture in depth. If you’re struggling to categorize what an experience at Star Wars: Galaxy’s Edge is like, the Renaissance faire model is actually a pretty accurate lens to describe it, and we wouldn’t be shocked if Imagineers took some cues from faires in their designs. Here’s why…

1. You completely forget where you are 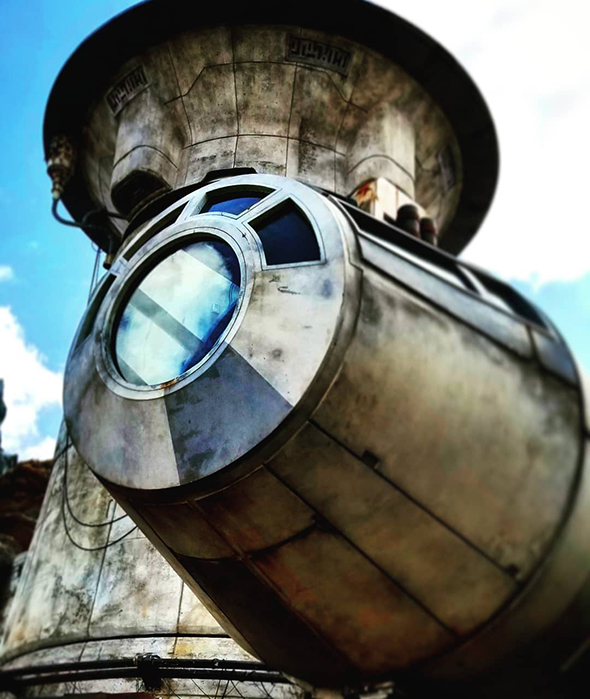 All successful Renaissance festivals utilize the same concept: they want to you to fully immerse you in a historical or fantastical world, to the point you will forget the hustle and bustle of modern life for the duration of your visit. Most faires open the day with a show to get you into the spirit of life in “the village”, and you don’t have to travel far into the grounds to be completely swept up in a different realm.

You don’t have to travel far into Galaxy’s Edge to tell you’re entering a place entirely set apart from the rest of Disney’s Hollywood Studios or Disneyland. The transition is even more seamless than the shift from Africa to Pandora in Disney’s Animal Kingdom. With a short walk through looming grey arches, you bypass the dark gates and enter the land of the spires, a realm where X-wings and landspeeders await pilots under towering rock formations, where moisture vaporators collect dew from the air, and where Resistance loyalists are hard at work planning their next efforts in the war against the First Order.

If you let yourself surrender to the world of Batuu, it’s easy to forget you’re at Walt Disney World or Disneyland. It’s a world you can get completely lost in. That’s the allure of immersive entertainment. Just like at a Renaissance festival, the land itself is the main attraction, along with all the otherworldly experiences it has to offer. The longer you linger, the more wonders you’ll uncover.

2. Everyone has a backstory

At a Renaissance festival, every worker you speak to is going to have a historically-appropriate story. Everyone from food vendors to artisans participate in the grand tale. I was a sound person at the Colorado Renaissance Festival, and in between tech gigs, I spent my free time in full costume interacting with guests as a casual atmospheric performer. While this may be an unfamiliar experience for faire newbies, you get used to it fast, and it’s just understood that workers staying in character is part of faire culture.

Disney cast members staying in-character isn’t a particularly new concept. Every time you ride the Tower of Terror or Haunted Mansion and see cast members with distant, sunken expressions, it’s not that they’re having a bad day—it’s all part of the atmosphere. Star Wars: Galaxy’s Edge takes this concept further than Disney has ever gone before, and some guests struggle to adjust to it.

I remember taking a good friend to Galaxy’s Edge recently, a fun-loving dad who is a big fan of  both the Star Wars classic trilogy and the new films. He loves quoting the movies and tried a Star Wars line on one of the Batuu locals, a vendor at the thermal-detonator-soda booth: “Republic credits will do fine” with an accompanying Jedi hand-motion.

The local responded that they only accept real credits here, totally deadpan, complete with shifty looks. Our friend tried again, getting the same response as we paid for our drinks and left. Moments later, I realized my friend didn’t know the cast member had been in character—he wasn’t sure if they were just being rude. After I explained that everyone is in character all the time, he tried this again at Docking Bay 7 and got a different response: the register attendant looked at him with a wry grin and answered that they’re trained against fancy Jedi mind tricks. The family had a good laugh. The paradigm for what to expect had shifted.

Finding the hidden backstories of Batuu-natives can take a little effort on your part. Most of the Batuuans are much more subtle with their interactions than boisterous Ren-faire workers. Some guests are made uncomfortable by too much role-playing, so many cast members try to feel out how guests will respond before diving into their characters full steam. However, if you’ll join in the fun, you can experience a whole new world of secret stories throughout the outpost. I’ve met a good many vendors and photographers who were happy to open up about how they’re only on Batuu for the credits if you start talking about the war. Similarly, a merchant at Dok Ondar’s Den of Antiquities confided that patrons who double cross Dok Ondar get fed piece by piece to his baby sarlaac, who they named Cynthie. Converse with the locals, and you’ll realize they each have a unique story for you to uncover.

3. A different kind of culture

Renaissance faires maintain a completely different culture from the world outside, and that’s not just in the performance aspects. They have unique rules of etiquette and a peculiar vocabulary. Cell phones may be referred to as magical boxes or “anachronistic devices”. Bathrooms become “privvies”. If you befriend a “Rennie” (a faire worker or regular), they may give you a hand-made token that represents the friendship, like a small pin, badge, or piece of jewelry if a relationship has been established or as a sign of gratitude.

It can be challenging for some guests to adapt to the culture shock of a visit to Star Wars: Galaxy’s Edge. Hello becomes “Bright Suns, Traveler” or “Rising Moons”. Bathrooms are “refreshers”. Passholders are “frequent travelers”. Dollars become “credits”. If you ask for directions (a frequent need since signage is purposefully limited), Batuu locals will always respond in character. On opening day, I saw a few frustrated guests try to press locals into breaking character, and the cast members navigated these situations brilliantly, using just enough information to help the guest without completely breaking the illusion.

On top of this, all cast members have different opinions in their backstories in regards to the war— Batuu is a neutral hub, like Switzerland. Different cast members will react to different things. Cast members may know that the Millennium Falcon made the Kessel Run in less than 12 parsecs but have no idea where Endor is because they’ve never left Batuu. They also probably won’t know super obscure Star Wars trivia references. Oh, and the unique culture doesn’t stop with the cast members…