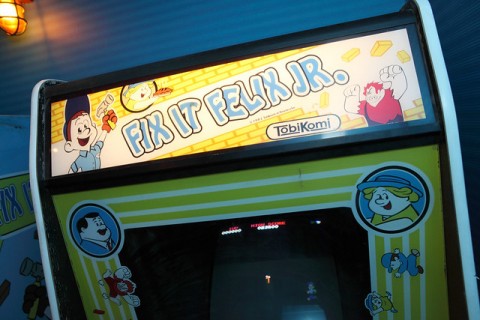 It seems like there are two kinds of Walt Disney World vacations. In the first kind, guests try to cram in as much as possible into the smallest time frame possible — often trying to see everything in four or fewer days. On these trips, “free time” is a laughable thought as every second is carefully planned to maximize the vacation dollar.

The second kind of Disney vacation is the exact opposite in every way. Maybe you’re only spending four days in total in the parks, but you’re spending a week or longer in the Sunshine State. These trips are designed to be a theme park trip, yes, but also a relaxing escape from the real world. And sometimes, on such a journey, you find yourself with an evening or two open, and nothing to do.

Sure, you could just go to bed early or catch a movie at Disney Springs, but why not try something a bit more unique?

Arcades and arcade-themed bars have enjoyed a renaissance in recent years, offering something to do when going out beyond just eating and drinking. Disney has arcades big and small at its own resorts, with some offering the newest redemption games, racers, and even some Disney-themed pinball machines. But, if you want the full experience, you’ll have to go off-property.

If you’re a hard-core 1980s gamer or just someone looking for a unique night outside your hotel room, here are the seven best arcades and bars near Walt Disney World. 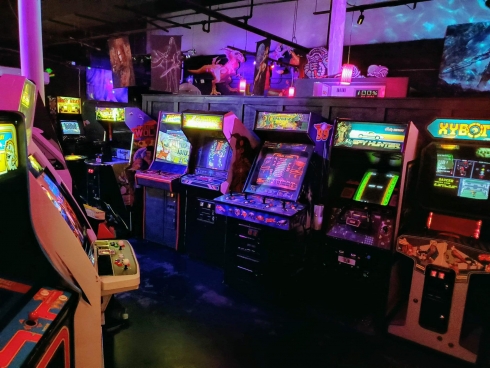 As close to Disney as you can get without hearing the Mickey Mouse Club theme song, Player 1 Video Game Bar is located just outside the Disney Springs entrance to the resort — behind the famous Crossroads Shopping Center.

This is the quintessential arcade bar experience, for anyone familiar with the genre. There’s a five-dollar cover charge for anyone who wants to play games, but once you’ve paid up, everything in the bar is set to free play. That’s a good thing considering the sheer amount of classic arcade machines available to play.

Additionally, there are console games throughout the bar that are also ready for your use — just in case you wanted to challenge a friend to some Wii Bowling on your night out.

Don’t be mistaken: This is still very much a bar, although its main offering is craft beer. In the evenings, it is strictly 21+. However, if you’re with the family and just want to enjoy some classic gaming, they do open early on weekends. 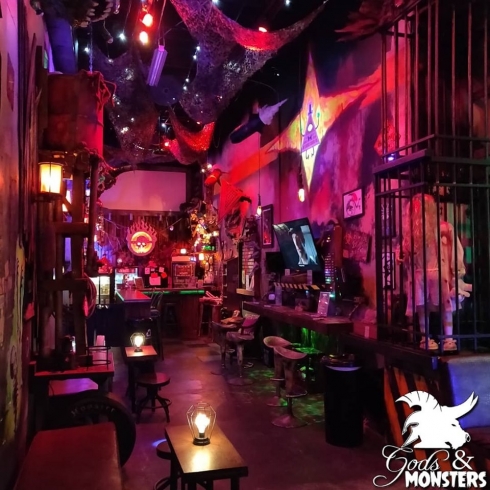 If you venture a bit further out from property, and make your way to International Drive — just down the street from Universal’s Endless Summer Resort and Fun Spot America, you’ll find Gods and Monsters. Primarily a comic book store, Gods and Monsters is a hub for for all things nerdy and niche — including video games.

It’s also, most importantly, home to a speakeasy called Vault 5421 — a post-apocalyptic-themed bar the features intricate design work, modern board games, and a handful of retro arcade games. They do a fair amount of events, such as theme nights and cosplay parties, so make sure to check the schedule when you’re in town.

If you’re looking for an arcade that includes every single classic machine, this isn’t the place for you. But, if you want somewhere with a unique vibe you won’t find anywhere else, Vault 5421 at Gods and Monsters should be on your list. 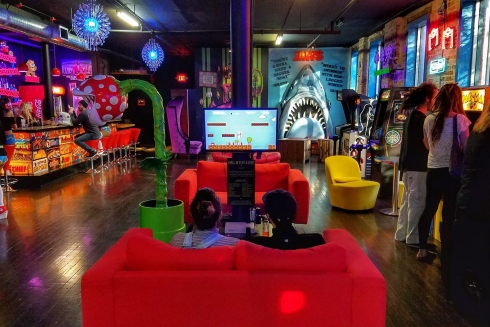 Just a bit further up I-4 in downtown Orlando sits Joysticks Arcade Lounge. Unlike Player 1, which is more of an arcade that serves beer, Joysticks is a full-on bar that just so happens to also have video games.

Yes, the games are plentiful and, yes, the bar itself is themed to video games and nerd culture more broadly. However, Joysticks is strictly 21+ at all times. And, its location in downtown Orlando tends to attract more locals and partiers than some other spots on this list — giving it a rowdier vibe. Of course, sometimes, that’s exactly the kind of feeling you want from a night out.

If so, Joysticks is a must-visit. The theming in the bar is fun, and the free games (there’s no cover charge if you’re drinking) make it a worthwhile proposition.

Now, yes, if you arrive at Walt Disney World via I-4, you will likely drive right by Dave and Buster’s — the national arcade chain we all know so well. Sure, if you’re in town and have some loyalty to D&B, it’s a worthwhile stop.

But, if you want more unique experience, you can head to Ocoee, Fl. to check out GameTime — a Florida-only arcade chain that includes modern arcade games, bar food, mini-bowling, and other fun entertainment.

Unlike some of the other arcades on this list, GameTime is pay-per-game — where, similar to Dave and Buster’s, you load credits onto a card. Also unlike those other arcades, GameTime is strictly about modern, high-tech games. They have the modern shooters, racers, Crossy Road, and everything else you’d expect at a non-retro arcade space.

GameTime is a bit further away from Disney property, but it’s also the most family-friendly location on this list. So, if you and the loved ones need a day’s escape from Walt Disney World property, it’s a great place to go.