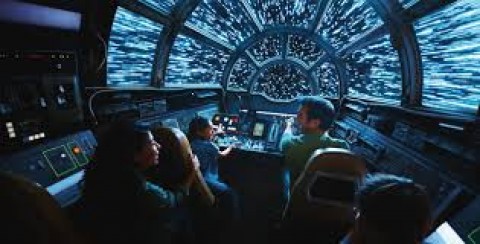 Since 1977, movie lovers have fantasized about flying the Millennium Falcon. Disney fans first got a taste of flying around in the Star Wars universe with the original Star Tours in 1989. Thirty years later, Imagineers fulfilled the real promise of starship piloting at Star Wars: Galaxy’s Edge when they introduced the themed land’s first attraction. Let’s go behind the ride to learn how Millennium Falcon: Smuggler’s Run works.

The experience: Allowing guests to board the Millennium Falcon

The trick: Making the ship the centerpiece of the line queue 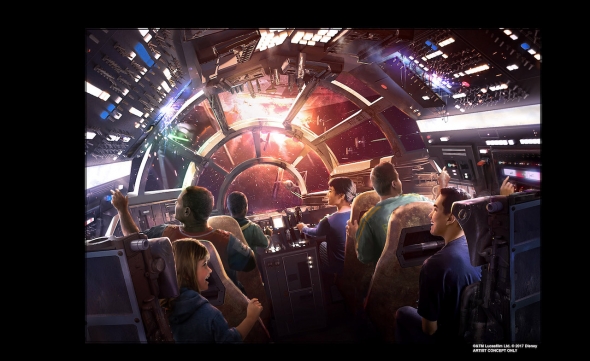 Image: DisneyDisney’s not stupid. They knew far ahead of time that the demand for a Star Wars-themed land would outpace anything that they’ve ever done before. With only two attractions planned, Imagineers had to prepare for the worst in terms of line queues. They expected most daily park guests to have at least a cursory interest in Millennium Falcon: Smuggler’s Run.

Disney constructed the entire line queue with this thought process front and center. Since Imagineers knew that they’d planned a life-size model of the Millennium Falcon as a signature aspect of Galaxy Edge, they doubled down on the glory of such a landmark. They created a line queue that would start right beside the starship.

Just before you enter the ride building, you’ll see this stunningly detailed replica of the vessel that can make the Kessel Run in 12 parsecs. Imagineers have lovingly crafted a vehicle that brings every aspect of the ship into full view. You can even see into the blue windows where Han Solo and Chewbacca once sat. 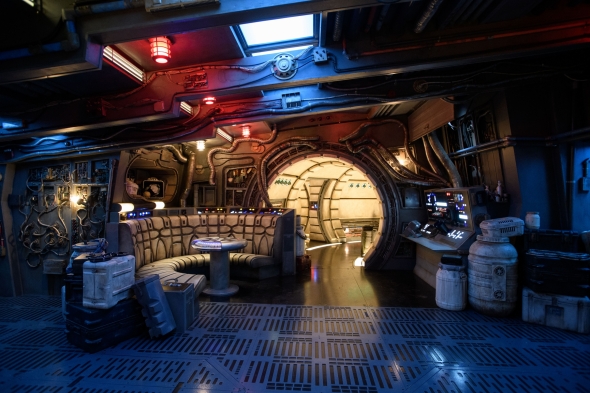 Image: DisneyThen, the inside portion of the line queue provides an unprecedented view of the Millennium Falcon. You’ll start on a lower level behind the vessel. Here, you can appreciate the grit and grime of the well-traveled starship, details that Disney adds to enhance the realism of its scale model.

When you reach the upper floor, you stand over the Millennium Falcon and can appreciate the detail of the top of it. Tubes and coils go into and out of the hull, powering the spaceship. The exacting nature of the Millennium Falcon elevates the immersion. Flying Han Solo’s ship sounds thrilling in theory, but the existence of a full-sized vessel just outside the building intensifies the experience.

The experience: making a new alien frenemy in Hondo Ohnaka

The trick: building the Star Wars character to life in multiple forms 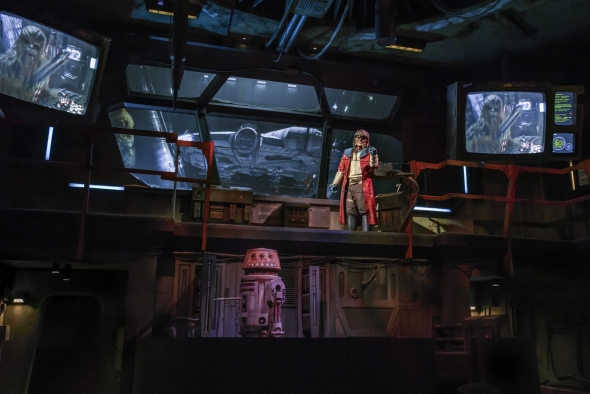 Image: DisneyIn the aftermath of Star Wars: Episode VIII – The Last Jedi, Chewbacca needs cash to fund the Resistance. He temporarily aligns with Hondo Ohnaka, the Weequay pirate. While the hilarious criminal isn’t emphatic about politics, Ohnaka recognizes that the fastest starship in the galaxy can help him with his nefarious enterprises. And that’s where you come in.

With Han Solo gone for good and Chewbacca barely seen on Millennium Falcon: Smuggler’s Run, Ohnaka is your host and thereby your boss for this mission. He’ll tell you what the job involves, and he’ll eventually narrate the mission in real-time. In other words, your new pirate ally is integral to all aspects of this attraction.

Imagineers knew from the planned story that riders would enjoy Smuggler’s Run more if they developed a personal relationship with Ohnaka. For this reason, he appears in three different phases of the attraction. You’ll first meet him in Audio-Animatronic form, and Disney went all-out in designing a state-of-the-art robot who you’ll believe is real.

In technical terms, Ohnaka is an A100 Audio-Animatronic humanoid. It’s one of the most advanced units due to the range of motion available. Ohnaka can wave dismissively, stare off distractedly, or clench his fists dramatically. This modern robot style replaces old-school hydraulic motions with electric functionality, giving Ohnaka that much more humanity. Well, he’s not human, but you get the point.

From a design perspective, cast members had an easy time recreating the look of Ohnaka. He’s a featured player in Star Wars: The Clone Wars, so he already had an established look and style. He’s got a full-length red coat, black gloves, and a kicky hat. He even wears sunglasses indoors. 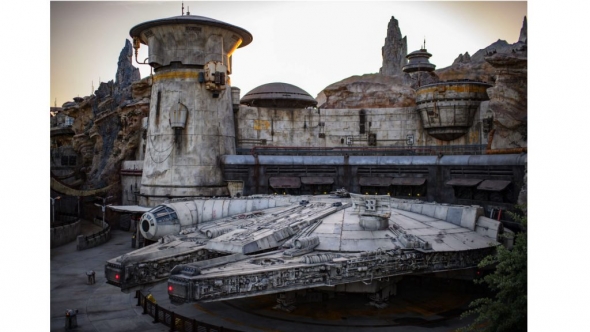 Image: DisneyTo add to the authenticity of the character, Disney re-hired Jim Cummings, who had previously provided the voice for the character. He’s more famous for his portrayal of Winnie the Pooh, but Cummings is extremely good as the scandalous pirate in this tale. His interactions with Chewbacca, appearing on a digital screen, are an especially nice touch.

After meeting the scale model version of Hondo Ohnaka, you’ll encounter him again just before entering the cockpit. He’ll appear on a monitor to enlighten you about the mission and give something of a pep talk. As with the Millennium Falcon, the fact that you saw a life-size version of him moments ago adds to the illusion that he’s a real alien interacting with you on the ship’s communication system.

The final time that you’ll see the pirate is during the attraction. Would-be smugglers need to know how to pull off a heist, and that’s where Ohnaka comes into play.

Image: DisneyThis is the genius part from a design perspective. Hondo narrates the action, instructing you on what to deal. Without him, you’d be flying blind on the details of your mission. You’ve never flown the Millennium Falcon before, after all.

Ohnaka will tell you which buttons to push, how to navigate, and when to attack during the action sequences. He’ll also let you know when you’re doing poorly and even review your performance in the end. Since the pirate doesn’t know you and works with a lot of people, he’s honest to a point of fault.

When you’re doing poorly, you will hear about it. When you do a bad job, he’ll disgustedly eject you from the cockpit in the end. It’s like the audio equivalent of red ink on a test paper. You’ll always know where you stand with Hondo Ohnaka, even though you might wish for silence on the subject.

I think if the lines were not so long you could ride this thing a half dozen times and figure it out. From the engineers chair you get a blocked view and distracting lights. Apparently we did not do well (sorry to the other 4 strangers in board) and got teased with some alien life form and then kicked off the ship??? The land and the queue are magnificent, the 'ride' not worth the wait. Star Tours is a much more satisfying experience.