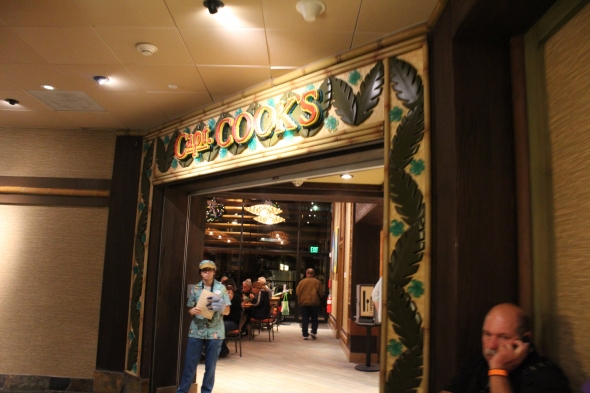 Similar to Picabu Market, both Disney’s Grand Floridian Resort and The Walt Disney World Polynesian Resort house 24-hour quick service dining locations. Many guests have reported their favorite is Gasparilla Island Grill at The Grand Floridian. Like other resort quick service locations, the grill offers a respectable selection of drinks and quick snacks, but where they really shine is their late-night pizza selection. Guest reviews overall were more favorable for Gasparilla’s gourmet pizza selections as opposed to other late-night pizza options (more on that later).

The other option is Captain Cook’s at The Polynesian. While a quick glance at their menu might make you assume there isn’t much to offer for late eaters, many visitors love ending their Disney days here with some sushi, a Dole Whip, pastries, and selections from a limited menu. Plus, the atmosphere of the Polynesian on a beautiful night can’t be beat!

4. The Boardwalk – Pizza and ESPN Club

The Boardwalk would seem like another “duh” choice for late night dining. Unfortunately, it has become somewhat maligned due to mixed guest feelings about The Boardwalk most notorious late-night dining option—the pizza window, usually open until midnight.

The main report is that the pizza is unremarkable with a distinct “frozen” quality. It’s not terrible, but it isn’t what most would consider Disney quality either. You may actually be better off ordering a pizza from nearby Celebration than stopping at the pizza window. However, it’s not a terrible choice for hungry kids or if you’re just looking to get through the night.

The better choice for Boardwalk guests (if you aren’t in the mood to hike over to Picabu) is The ESPN Club. With a full dinner menu available until midnight, it’s a legitimately tasty place to eat, particularly their famous buffalo wings. I am not a huge sports fan at all, but I can say we’ve enjoyed many happy visits to the ESPN Club. Do note that it is completely different from ESPN Zone restaurants like the one found at Disneyland so expect menu options to be different. 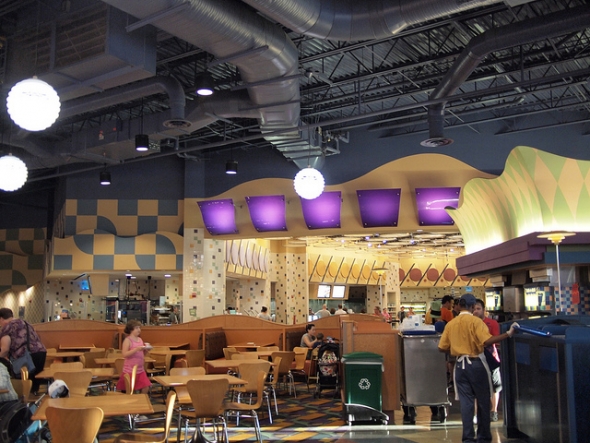 Disney isn’t blind to hungry guests with hungry kids arriving back to their resorts. Most of Walt Disney World’s resorts house some sort of food court, such as The End Zone at Disney’s All-Star Sports Resort or Riverside Mill at Disney’s Port Orleans Riverside. While closing hours for these locations vary (the ones at the All-Star Resorts usually close at midnight), it is always worth checking if the food court or quick service locations at your resort have a late-night dining option.

Many of Disney’s resorts also offer some in-room dining options, such as pizza delivery until 1:00 AM at the All-Star Resorts or until midnight at the Caribbean Beach Resort, Port Orleans, Pop Century, Art of Animation, Old Key West, and Saratoga Springs. The Swan and Dolphin offer late night in-room dining menus with appetizers at a somewhat inflated price. Check the guest services guide in your room for options for your individual resort. Speaking for ourselves, our go-to choice remains a quick trip to Picabu or Captain Cook’s rather than spending extra for room service.

What is your favorite place to eat late at Walt Disney World?