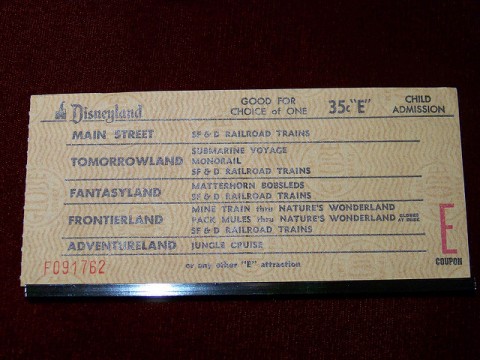 Sitting in the center of the Challenger’s flight deck, 32-year-old mission specialist Sally K. Ride became the first American woman to enter outer space on June 18, 1983. The shuttle thundered above the launch pad of Kennedy Space Center, en route to its six-day, 97-orbit mission around the Earth.

Ride radioed Mission Control. “Have you ever been to Disneyland?” she asked. “This was definitely an E ticket.”

It may not have been a perfect comparison, but that’s precisely what springs to mind when we think of an E ticket attraction: an experience that transcends the standard amusement park fare to offer us something innovative, thrilling or inspiring. In a word, it’s extraordinary. (Maybe not exit-the-planet’s-stratosphere-while-operating-a-robotic-arm-that-launches-shuttle-pallet-satellites-extraordinary, but extraordinary nonetheless.)

In the summer of 1959, Disneyland pulled back the curtain on three big attractions: the Submarine Voyage, Disneyland-Alweg Monorail and the Matterhorn Bobsleds. Bigger thrills meant bigger profits, but the park’s four-tier coupon books were already packed full with attractions like Peter Pan’s Flight, Mike Fink Keel Boats, Skyway to Fantasyland and the Rainbow Caverns Mine Train, among a variety of others. They needed something that would immediately set their new rides apart – and a modest price hike wouldn’t be so bad, either. 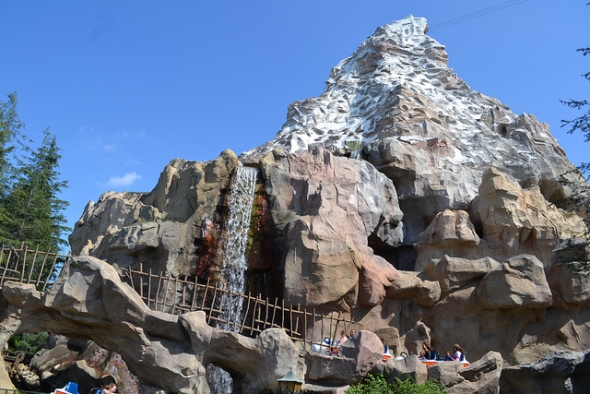 Enter the “E ticket,” the fifth and final tier of the Disneyland ticket book. For 50 cents, guests could buy admission to the most awe-inspiring rides at the park, including the Santa Fe and Disneyland Railroad Trains, TWA Rocket to the Moon, Rainbow Ridge Pack Mules, Rainbow Mountain Stage Coaches, Mark Twain Steamboat, Sailing Ship Columbia, Tom Sawyer Island Rafts and the Jungle Cruise.

By the time Disneyland discontinued its ride coupon distribution system in 1981, the E ticket lineup had featured most of the iconic attractions in theme park history, from the spooky corridors of the Haunted Mansion to the hairpin turns of Space Mountain and the less-invigorating but highly entertaining Country Bear Jamboree.

Today, of course, Disneyland coupon books are nothing more than cherished relics of days gone by. Imagine, however, that they survived the jump into the 21st century. What would an E ticket coupon look like in today’s roller coaster-saturated theme park? Would the Jungle Cruise still make the cut? Would the Tom Sawyer Island Rafts? Let’s find out.

What’s so special about the E ticket? 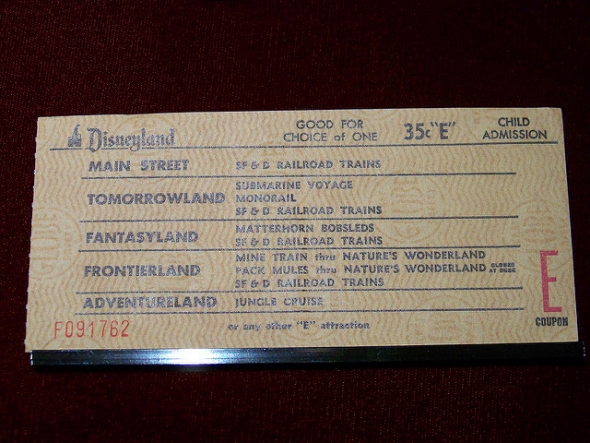 It’s tempting to call every modern roller coaster an E ticket experience, but the original E ticket did more than advertise the most intense rides in the park. It shone a spotlight on Walt’s most beloved and remarkable inventions, from the real steam trains that chugged around the perimeter of Disneyland to the animatronic hippos that flashed gap-toothed smiles at guests aboard the Jungle Cruise. If you had one of these 50-cent bad boys, you knew you were about to experience the best Disney had to offer.

Unlike the lower-tier coupons, an E ticket guaranteed guests access to a top-shelf attraction in each of Disneyland’s five themed lands: Main Street, U.S.A., Adventureland, Frontierland, Fantasyland and Tomorrowland. (New Orleans Square wouldn’t make its debut until 1966, while Critter Country followed in 1972 and Mickey’s Toontown opened in 1993.) Frontierland was home to a whopping six of 11 attractions listed on the 1959 E ticket, but by 1960, both the Mark Twain Steamboat and Sailing Ship Columbia had been demoted to a D ticket and Rocket to the Moon was bumped all the way down to a C Ticket alongside the likes of Tomorrowland Autopia and Dumbo the Flying Elephant.

In the interest of upgrading the original E ticket, let’s limit this experiment to just 11 attractions, with at least one ride or show from each of Disneyland’s eight lands. (It’s safe to assume Star Wars land will host a number of true E ticket experiences when it premieres its interactive Millennium Falcon experience and First Order battle ride in 2019, at which point this list, like the ever-changing coupon books before it, will need some tweaking.)

I would totally swap Railroad for It's a small world! I don't think Railroad would ever make it to this list if the rule wasn't 'at least one ride per land'.
Anyway, I found this article really interesting and I think it would be fun to pick the E tickets of today at other Disney (or even non-Disney) parks, especially those which never had the ABCDE ticket system.
I'd love to read also about the other categories, because everyone talks about the É tickets, but it isn't always obvious what differentiates a B from a C, for example

How about we change the system a bit? I know this sounds utterly insane, seriously, impossible more like, but even if it is, it would probably be incredibly costly, both for Disney itself, and for it's guests. But how's about an e-ticket which would allow you to experience attractions across Disney's entire theme park lineup, connected to a cross-continental, magic band style system that checks each guest in as they arrive.
This would work by you being able to pick an experience from each of the parks, but just one experience.
A potential, guest-picked list, could probably look like:
Matterhorn
Radiator Springs Racers
Flight of Passage
Soarin'
Tower of Terror
Haunted Mansion
Phantom Manor
Ratatouille
Pooh's Honey Hunt
Journey to the Center of the Earth, or possibly Sindbad
and finally Battle for the Sunken Treasure due to Tron coming to wdw in a few years.
Interestingly, I counted back the list, and unbelievably, I did not plan this, but this actually makes 11 attractions!
As for how this would work:
Imagine this impossibility just for some at-home imagineering:
To allow for this ticketing, Disney announces and builds a monorail-style system that connects from country to country. But here's the catch. A guest would have already needed to check in at a theme park first, and the time would strictly be booked for this. So, after spending a while at the park, maybe even going so far as to an entire day, instead of going back to a hotel, villa etc, you go to this new station and bored a sleek, new vehicle that is, somehow, very quiet yet very fast, fast enough to go across country. To make this even more crazy, air traffic control need not worry. It goes underground!
You'd do your rides and then move on, ready for your next timing. Honestly, the more I think about it the more I think it's ridiculous, plus I think it'd be a logistical nightmare to pull off especially when it comes to stuff like resorts with multiple parks, as if the parks aren't busy enough already you'd have people going up and below ground plus it's kind of cruel because while this ticket would give you access to one entire park, after that park day and you take your vehicle, you are then stuck with your remaining experiences being tied to the ticketed options that you picked, and then you wait for the next vehicle and move on to the next park. Plus, it'd probably be exhausting for the guest, not the least due to timezone differences. I would also have no idea on the price of this.