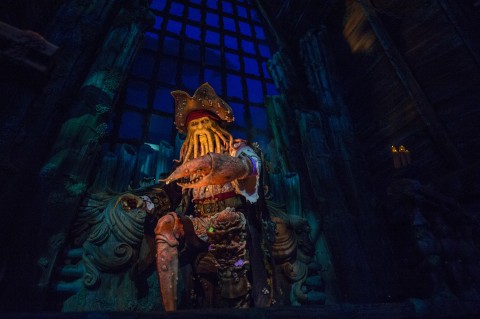 1. Pirates of the Caribbean: Battle for Sunken Treasure

Despite the existence of a Pirates of the Caribbean ride at both Disney World and Disneyland, we can’t help but swoon over the prospect of having a ride like Pirates of the Caribbean: Battle for Sunken Treasure over on western side of the world. Shanghai Disneyland has taken this classic water ride and amped it up to a full 11 on a 1-10 scale. I won’t ruin the whole thing for you (unless you want to watch the video above), but what starts out as a quintessential pirates ride, slowly turns into an all-out immersive action packed experience that weaves you in and out of pirate ships as they battle for the sunken treasure.

Here in the states, we ooh and ahh at the high tech combination of surround screens, perfectly timed water blasts, and light and sound integration so meticulously designed that it makes some parts feel like actual magic. It’s easy to see why guests are already clamoring for remodels. Plus, we would really like to know what those pirates are saying in English.

Disneyland Paris may already have Alice’s Curious Labyrinth, but Shanghai Disneyland takes a whole new spin on the attraction, basing it around Tim Burton’s Alice in Wonderland live action films. This hedge maze definitely has more of an adult feel with darker and more brooding details. Mysterious doors lead you to paths of uncertainty, giant cards shield your way through the hedges, and the Queen of Hearts looms disapprovingly overhead. Yes, Shanghai delivers just the right balance of intensity and whimsy.

We have to say, a hedge maze would make a great attraction stateside, allowing an alternative for children who are too small for bigger rides or adults who do not like or are unable to go on roller coasters.

I would go back to WDW for these for sure.

Is Mystic Manor at this new park? Would love that to come stateside. Maybe even replace the inside of the outdated boring great movie ride?

Unfortunately, no, Shanghai Disneyland does not have Mystic Manor. So, I guess they have something to be jealous of as well.

As jealous as we are here stateside of Shanghai Disney, I think that trend will be reversed starting next year when we see a lot of the same technology (and newer!) incorporated into Pandora. A few years later, we get new Star Wars attractions that will be even better than Pandora!

It's interesting that they would name a ride Roaring Rapids when Six Flags has one with the same name.