9 Amazing Disney Experiences You Can ONLY Find Outside the US

If you ever get the chance to visit a Disney park outside of the United States, you’ll see some familiar sights. For example, there are versions of Adventureland, Fantasyland, Tomorrowland and Frontierland at Tokyo Disneyland, Disneyland Paris and Hong Kong Disneyland – though some lands may have slightly different names. There are also multiple versions of Main Street U.S.A., and some recognizable rides and attractions are available across the globe, such as Dumbo the Flying Elephant and It’s a Small World.

But there are several features that are unique to the parks in Tokyo, Paris and Hong Kong that definitely make each of those locations worth at least one visit. Here are nine amazing Disney experiences you can only find outside the U.S.:

1. A hunt for honey on a unique track

One of Tokyo Disneyland’s most popular attractions, with some of the park’s longest wait times, features a trackless ride system. This technology was never used before Pooh's Hunny Hunt, which opened in late 2000. Guests board five-seat honey pots and follow Pooh on his quest for his favorite snack. The story is just like The Many Adventures of Winnie the Pooh at Walt Disney World, but the ride’s journey at Tokyo Disneyland is very unique. The ride doesn’t appear to have any way of getting the vehicles through it at all – and the pots look like they have a mind of their own, with the ability to start, stop, reverse and spin independently.

2. A different take on Autopia

The second Disney attraction to feature the trackless ride system technology is Aquatopia, a water lagoon ride at the Tokyo Disney Resort’s Tokyo DisneySea park. Aquatopia gets its name and concept from Disneyland’s Autopia, though you don’t actually control the boats on this ride. But that doesn’t mean that Aquatopia is boring – this ride will send you twisting, turning, backing up and spinning around, all while narrowly avoiding jagged rocks, spinning whirlpools and other boats. The ride vehicles hold two or three people each and the ride is fun for kids and adults alike. 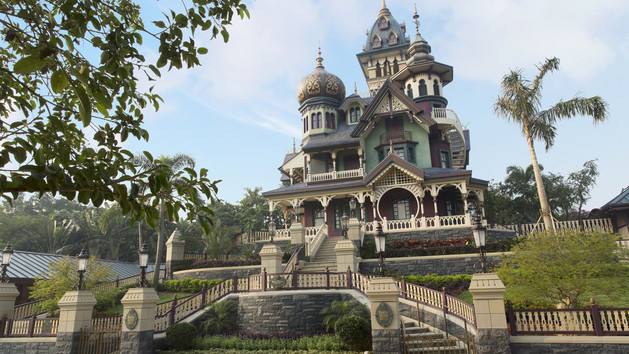 Mystic Manor at Hong Kong Disneyland is the third ride to have a trackless ride system. While its title might inspire thoughts that this ride is similar to the Haunted Mansion, it’s actually not. Because of differences in traditional Chinese culture, there are no references to dearly departed spirits or the afterlife. This ride has a lighthearted theme that’s based in fantasy. You board a four-seat Mystic-Magneto Electric Carriage and follow the story of Lord Henry Mystic and his adorable monkey, Albert. When Albert opens an enchanted music box, it brings everything in the large Victorian mansion to life. Instruments start to play by themselves, people leave paintings and statues create havoc, all while the ride vehicles swirl around the floor, traveling freely.