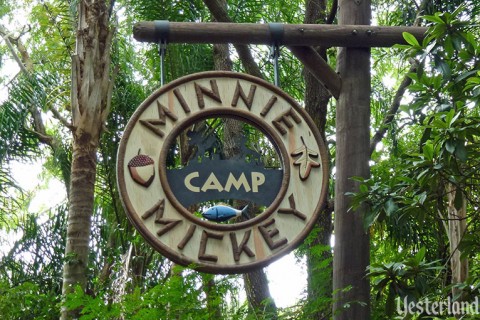 Not every land at Disney Parks becomes an instant and beloved classic... When you think of Disney Parks, you probably think of incredibly themed lands rich with detail and history. From the dense jungles of Adventureland to the sweeping vista of Cars Land, Disney has always set itself apart from competitors not only by their intricate rides, but by the larger immersive environments they're placed in.

Last year, we took a look at 8 spectacular themed lands that Disney planned, but never built. Those incredible environments never saw the light of day. Unfortunately, the 8 we've collected here did (sometimes instead of the never-built ones)! These lands came and went for a number of reasons. For most, they simply didn't live up to Disney's best efforts and fell far below standard. Did you get a chance to visit any of these forgotten Disney Parks lands? Do you think they were taken too soon? Or have their replacements more than made up for the loss? 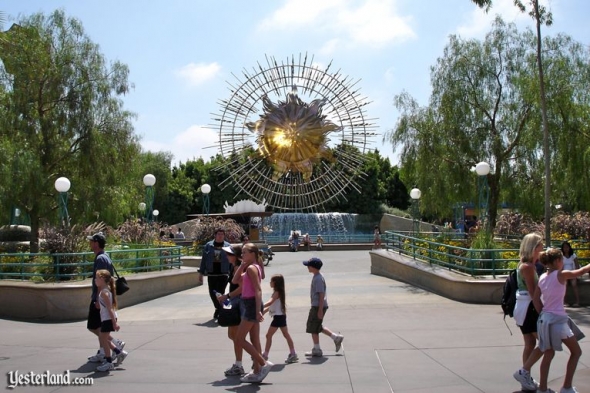 When you enter Disneyland, you step into the charming turn-of-the-century Midwest town of Main Street USA – an idealized and romanticized version of the Missouri town Walt grew up in. Just across the way is the entrance to Disney’s California Adventure – a wide concrete plaza flanked by corrugated steel walls (yes, this was in a Disney Park), garish neon signs and cartoonish architecture in squashed perspective. Sunshine Plaza was a budget-conscious and lackluster entryway on its own, but compared with Main Street just a few hundred feet away, it looked positively awful.

And where Disneyland’s entry terminated in the timeless Sleeping Beauty Castle, Sunshine Plaza was built around a giant metallic sculpture of the sun. Nicknamed “The Hubcap” by fans, the giant bronze sun faced north, leaving it up to a half-dozen telescoping mirrors to reflect the real sun onto its shaded face. The effect never worked, and Sunshine Plaza remained as a dark and mediocre entrance to a mediocre park. Sunshine Plaza was symptomatic of the “edgy,” “modern” style of the original California Adventure park, which came across as more irreverent than hip and x-treme. 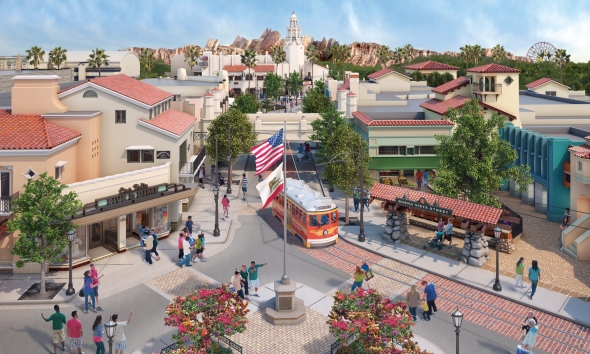 What’s There Now: Sunshine Plaza closed one piece at a time when Disney California Adventure’s $1.1 billion restructuring came into effect. The transformation was so intense that, for a while, entrance to the park was diverted down an auxiliary path behind Soarin’ Over California, bypassing the main entry path completely.

The vacant concrete area was transformed into Buena Vista Street – a recreation of the Los Angeles Walt first encountered in the 1920s. Now a bustling street just as detailed and timeless as Main Street, the new land is a worthy counterpart to Disneyland’s entry instead of being such a contrast. The Sun Icon disappeared too, replaced by a recreation of Los Angeles’ Carthay Circle Theater, where Walt risked it all by premiering the world’s first full length animated feature film – a testament to Walt’s history, the company’s, and California’s. Brilliant! 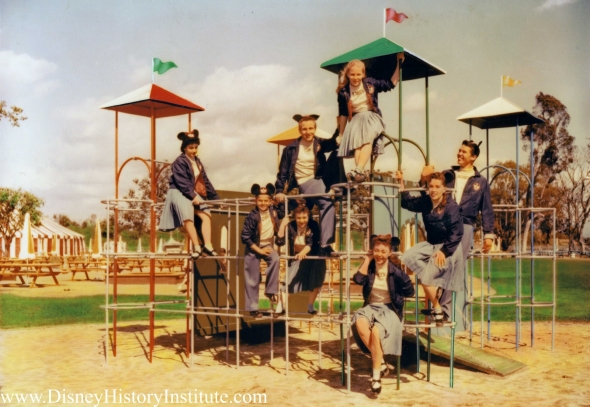 Holidayland is often recalled as Disneyland’s first lost land. No, it wasn’t an area dedicated to Christmas, Easter, and other culturally significant days of celebration. Holidayland was more along the lines of the British understanding of “holiday” – an outing or vacation. The land was accessed through a separate entrance, and contained a striped circus tent with a stage, volleyball court, a baseball field, a children’s playground, a picnic area, and horseshoe pits. You can get an idea of Holidayland’s placement and layout on this large 1962 souvenir map.

Despite its inclusion on the map, Holidayland didn’t last until 1962. It closed forever in 1961, allegedly due to its lack of shade, lighting, and restrooms. Truthfully, Holidayland was probably meant to be temporary, built with a much different lean than the rest of the park and its cinematic realism. The 9-acre spot held 7,000 guests for special events and even sold beer. Milt Albright, Disney Legend and manager of Holidayland, said of its closure, “It wasn't any one thing that killed Holidayland. It was just the combined effect of a whole lot of things."

What’s There Now: The map above shows where Holidayland would’ve been in 1962 if it had lasted that long. The map also shows Pirates of the Caribbean and Haunted Mansion, which wouldn’t open until 1967 and 1969 respectively (so the 1962 map was pretty inaccurate!). The space was used for the Haunted Mansion showbuilding and other backstage elements of New Orleans Square, which opened in 1966. 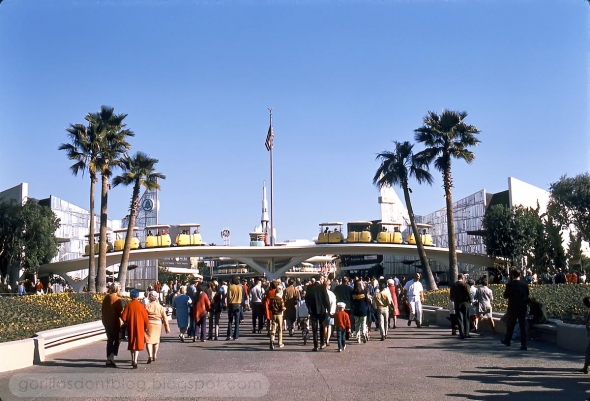 Whenever a Disney Park opened, it usually came with a Tomorrowland recreating the future as envisioned by that time. Problem is, wait long enough and “tomorrow” always becomes “today.” Or, at least a very dated vision of “tomorrow.” Both Magic Kingdom and Disneyland had most famously built “Tomorrowlands” representing sleek, white, harmonious, utopian futures, albeit as envisioned in the 1960s and 1970s, respectively. Both of those styles would admittedly look great today since those geometric styles are now old enough to be “retro-cool.” But by the 1990s, they looked entirely dated.

And Disneyland’s Tomorrowland was in bad shape. The famous and beloved Peoplemover designed by Walt had stalled, leaving the overhead tracks motionless. The Carousel Theater – once home to Carousel of Progress – had been empty for years since its animatronic cast from America Sings had been recast in Splash Mountain. Captain EO was growing tired in the 3D theater, and the Submarine Voyage was on the verge of closing. The Circlevision Theatre had also lost a bit of its wow factor by the mid-90s.

Luckily, Disneyland Paris had set a new standard upon its opening in 1992, designing a future-oriented land not based on the science of what really could be, but on fantasy. Magic Kingdom followed with a New Tomorrowland based on science-fiction! Those Tomorrowland designs were timeless. That way, the “present” would never catch up. In 1998, Disneyland opened its own New Tomorrowland, based heavily on Paris’. The design flopped and was instantly disliked. You can read our standalone feature on the dismal Tomorrowland 1998 here. 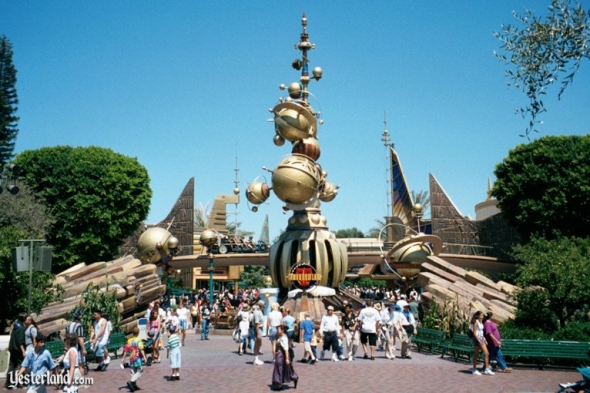 What’s There Now: Ever since its 1998 redesign, Disney had worked one step at a time to undo that ill-fated Tomorrowland overlay. But the piecemeal effort has left the land disjointed and disconnected, lacking a continuity and identity that the other Tomorrowlands in the world have mastered. Fans still hope that a real, worthwhile floor-to-ceiling rebuild of Tomorrowland is in the works, as the current land contains some of the white geometry of Walt’s time, some of the organic gold from 1998, and some silver, blue, and purple attempted to cover it. It’s a mish-mash of stories and identities that refuse to cohabitate nicely… especially sad since Tomorrowland can have a very strong and impressive identity as evidenced in Orlando and Paris. 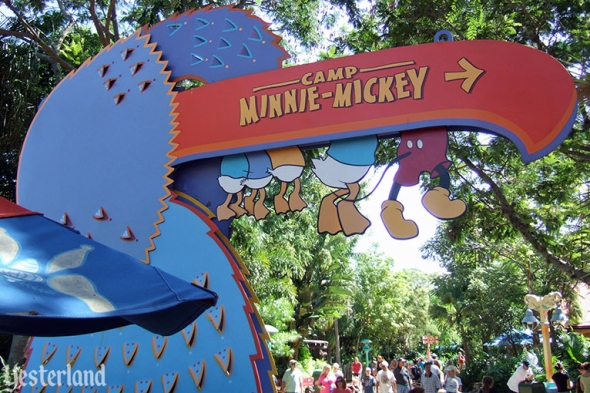 During Disney’s Animal Kingdom’s lifetime, it’s hosted gorgeously, thoroughly themed lands recreating a flowing universal garden, a crumbling African village, a stunning Asian market, and a North American excavation camp. Then there was Camp Minnie-Mickey. The land was a stark contrast to the realistic villages of the rest of the park, filled with temporary wooden structures and long meandering paths that didn’t seem to lead anywhere.

The decorations and even structures felt temporary. That’s because they were supposed to be. Camp Minnie-Mickey was supposed to be a very short-lived land holding the place of Beastly Kingdom, the proposed mythical creature land designed for Animal Kingdom. Of course, Beastly Kingdom was never built, so Camp Minnie-Mickey prodded on with its one show and character meet-and-greets for more than 15 years. 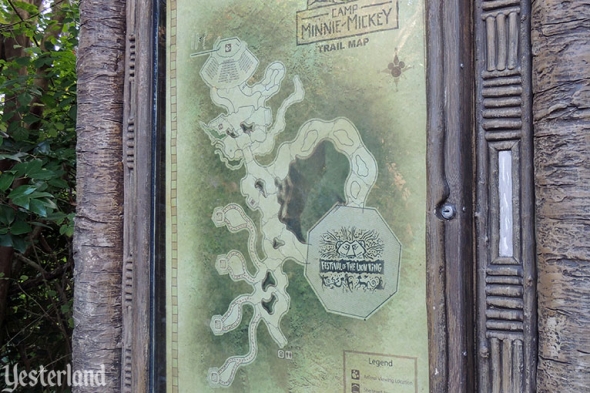 What’s There Now: Currently, nothing but dirt and metal. The land was finally, permanently closed in 2014. It’s not Beastly Kingdom that’s being built on its ruins but Pandora – The World of Avatar, the controversial expansion due to open in 2017. In some ways, Camp Minnie-Mickey lives on: it’s single attraction was the runaway hit Festival of the Lion King, which received a much more permanent-looking theater in the park’s Africa land when the Camp went out of business. You can read our in-depth walkthrough of what Beastly Kingdom would’ve included if you want to know more. We also had some fun imagining what else could’ve fit into the land formerly occupied by Camp Minnie-Mickey, which is well worth a read.

The 1962 map under Holidayland also includes Edison Square, which was never built.