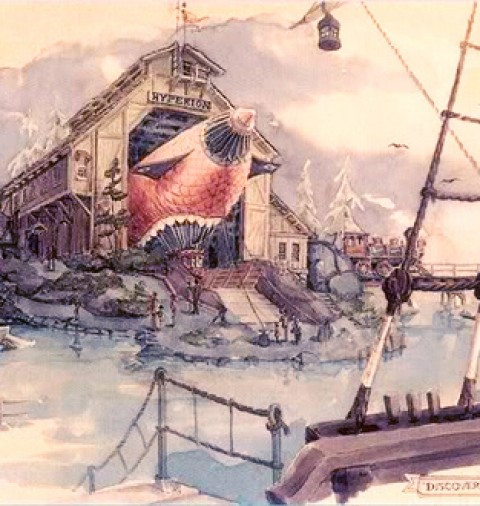 Fantasyland, Cars Land, Tomorrowland... Glacier Bay? If park icons are the heart of Disney Parks, themed lands are the bones and joints! One of the basic tennents of Disneyland that set it apart from the amusement piers of the era was its lands that recreated idealized time periods and places brought to life in agonizing detail, almost like stepping onto a film set. (And that's no coincidence... Walt was careful to hire filmmakers, writers, and urban planners to design and build Disneyland, a process that continues today as Imagineering.)

But not every land makes it off the drawing board! Be it budgets, replacement ideas, or frustrated Imagineers, some lands simply don't take off, despite fan outcry and passionate designers. Let's take a look at eight of the coolest lands that Disney planned or even announced, only to change its mind and cancel at the last possible second. 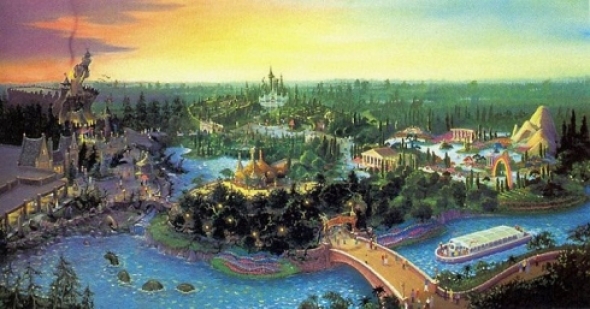 When Disney’s Animal Kingdom opened in 1998, it was made up of five of the most extravagant lands in any theme park at the time, dripping with detail and stunning architecture. Then there was Camp Minnie-Mickey. The land – which contained two performance venues and huts in which to meet Disney characters – felt temporary, and it was. “Phase II” of Animal Kingdom’s construction was meant to replace Camp Minnie-Mickey with a land based on mythological creatures called Beastly Kingdom.

The land would’ve been divided into a “light” realm (with an elaborate Quest for the Unicorn walkthrough maze and a Fantasia Gardens boat ride) and a “dark” realm (a cold medieval village with a headlining dragon-themed indoor coaster). Fans (and Imagineers) very publicly rallied together for Beastly Kingdom to happen, but it never did. Frustrated Imagineers took their designs to nearby competitor Universal, who happily incorporated them into Islands of Adventure’s Lost Continent land. The story of how Disney "accidentally" designed Universal's best lost land is the subject of its own in-depth feature, Possibilityland: Beastly Kingdom – a must-read for Disney Parks fans.

What Happened: The space once earmarked for Beastly Kingdom remained as Camp Minnie-Mickey for 15 years before folding to become Pandora – The World of Avatar in 2017. 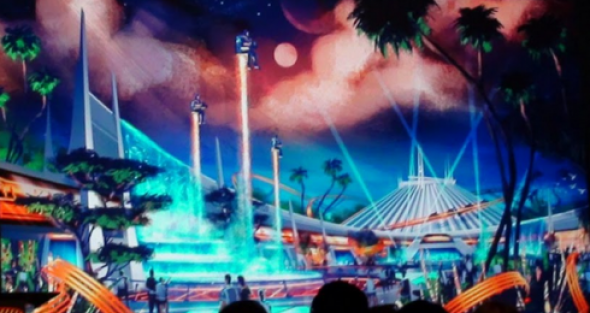 Ever since the first one opened in 1955, Tomorrowland has suffered from one simple problem: tomorrow always becomes today. To remedy the issue, each Tomorrowland on Earth diverged into different ideological directions during massive renovations in the 1990s. In Florida, Tomorrowland became a silver, science-fiction spaceport. In France, Tomorrowland was reborn as a gold and copper seaport as envisioned by Europe’s visionary minds. 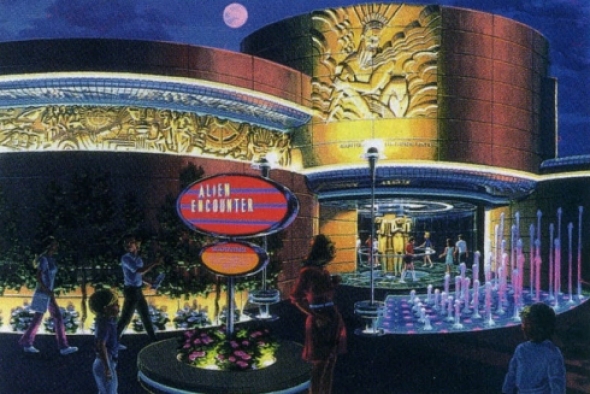 Alien Encounter would've been an element of Tomorrowland 2055. © Disney

The original Disneyland was just about ready for a New Tomorrowland, as well, and the plans for Tomorrowland 2055 were as ambitious as could be. The new land – an intergalactic alien spaceport – would’ve used a system of skywalks to connect mechanized buildings inhabited by alien attractions like Plectu’s Intergalactic Revue in the Carousel Theatre and a clone of Magic Kingdom's Lost Legend: The ExtraTERRORestrial Alien Encounter in a futuristic building carved with Olympians.

What Happened: When Disneyland Paris failed to meet financial expectations, projects across the Parks division were slashed. The idea of an elaborate and expensive Tomorrowland became just one of the incredible projects Cancelled and Closed 25 Years Ago thanks to the French failure. Disneyland still needed a fresh, new Tomorrowland, but rather than the grand Possibilityland: Tomorrowland 2055, it recieved a land so hated, it's the subject of its own in-depth Disaster File: New Tomorrowland '98 and the Rocket Rods. While Disney has piecemeal improved the land since, it still lacks the cohesive style of other Tomorrowlands across the world even twenty years later!

Lost Expedition sounds awesome!!! Is it too late to add it to Disneyland? :)

Back in the 90s Disney considered building a theme park based on the Civil War in Virginia. Friends of ours were consultants for Disney and after much study told Disney management this would be a bad idea.

I'm a huge fan of Disneyland and the classic movies as well as many of the newer ones, but I'm a little lost here. There was a time when Disneyland was the showcase and now it seems that no new rides/lands will ever be made unless there's a strong movie to support it. Can we can back to doing new things at the parks and stop relying on films??

All the Disney parks should aspire to be great at creating new things. The rides, attractions and lands do not have to be modeled off of successful tv shows or films. Use Tomorrowland like it was used in the early days...as a place of discovery and wonderment. The proposed lands above would have been great additions to any park.

Disney should keep in mind that even a successful franchise can wither away. If Tomorrowland became Star Wars land, how long will it take for guests to be tired of it? I know Star Wars is huge, but as a land?? I think it's too specific. Every other land is fairly generic within its own theme and therefore can be added to without having to change the name.

Excellent points. I think they rely too much on recent films to make something and not use the imagination part of Disney. I would love to see some new rides and attractions but it doesn't always have to be based on a movie. How about remaking Horizons at Epcot and really make it the way it was supposed to be made?