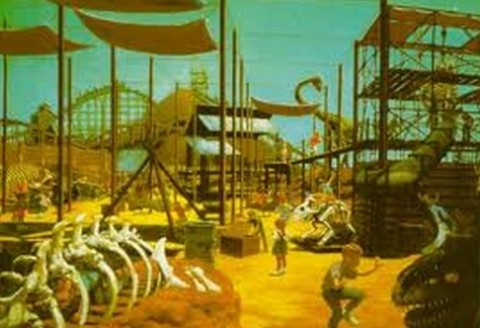 Disney's Animal Kingdom now has its very own mega-budget roller coaster, Expedition Everest. But the original plans for the park included a very different coaster ride...

The backstory for the Dinoland U.S.A. area of Animal Kingdom revolves around the discovery of dinosaur fossils in a former sand and gravel pit. The benefactor of a local college bought up the site, setting its paleontology students to work on uncovering the dino bones. He also founded the Dinosaur Institute, which hosts the Dinosaur dark ride.

Left over from the site's days as a gravel pit was a major piece of machinery: The Excavator. This ore car circuit was to form the basis for a huge, heavily-themed, mine cart-style roller coaster that would be one of Disney's Animal Kingdom's headline thrill rides. The storyline would be that the college students had once again restarted the Excavator, using it to transport dinosaur fossils.

After queuing past a host of signs warning them that the site was unsafe, guests would have boarded a ride that bears a striking resemblance to both Big Thunder Mountain Railroad and the under-construction Seven Dwarfs Mine Train. 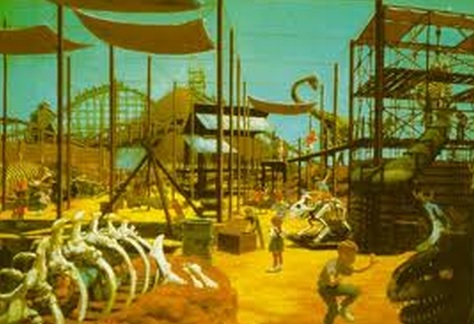 The cars would race through a dinosaur skeleton, before being menaced by moving folk art-style dinosaur sculptures. 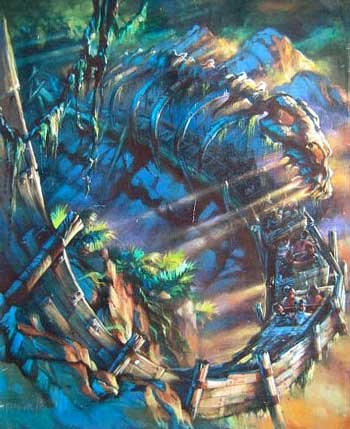 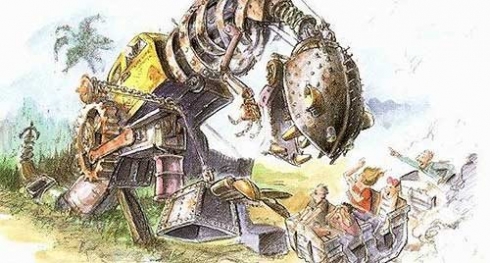 According to long-time Disney correspondent Jim Hill, The Excavator was dropped from Animal Kingdom's opening day line-up due to the spiralling costs of building the park's zoo attractions. It was felt that Dinosaur would be sufficient as a thrill ride to anchor the Dinoland U.S.A. area, and the plans were parked. When it came time to add a major coaster to Disney's Animal Kingdom's line-up, the space that had been allocated for the Excavator was now occupied by TriceraTop Spin and Primeval Whirl, so Expedition Everest was built instead.

So, for now, all we have to remember this striking, dino-themed coaster is the concept artwork above...

Thank you for another interesting and informative article! I'm curious- is there any chance that this concept could be revived and built? I know that Animal Kingdom already has its fair share of new attractions on the way, but I just think that another super headliner coaster could really boost the park overall. Thank you!