Aboard CTX Time Rover jeeps, guests pass through a time machine and return to the age of the dinosaurs with mere moments to spare before the asteroid hits. Challenged to save an iguanadon - and avoid a hungry carnotaur - this is one out-of-control off-roading adventure. 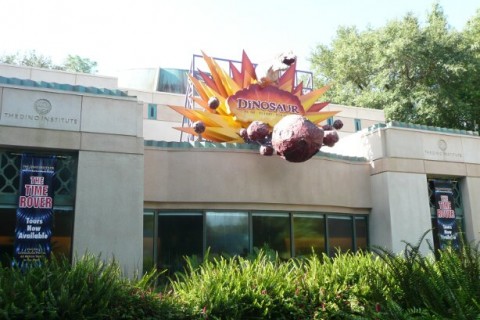 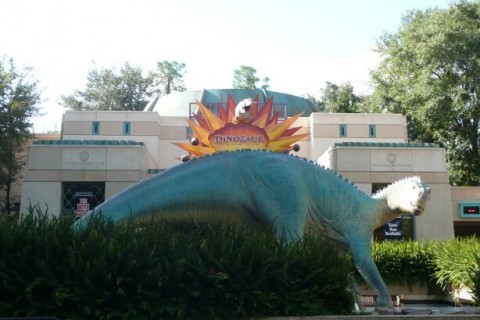 See all photos of Dinosaur

Dinosaur - A Fast Blast to the Past

Submitted by Anonymous on Tuesday, September 10, 2013.

Tucked away in its own little nook in the Dinoland U.S.A section of Disney's Animal Kingdom park lies one of the best attractions in all of Walt Disney World, the simply named: Dinosaur

Now if you're thinking this ride is ANYTHING like the attraction over at Epcot in the Universe of Energy building - - - GUESS AGAIN.

Unlike that very slow-moving, mainly information attraction, this one is all about the thrills. In fact, until Expedition Everest came along, Dinosaur was THE main thrill ride in Animal Kingdom and for good reason: It Rocks!

* The Building, Pre-Show, and Ride

Upon entering the building (walking past the large iguanadon statue standing outside), you're immediately immersed in an almost-living history of the age of the dinosaurs, with fabricated plant and animal fossils in the walls around you, posters of various extinct critters and informational placards as well.....and then you enter one of the main waiting area, with a huge lifelike skeleton of one of the deadliest dinos of the past, a carnotaurus. As you wait in this room for the cast member to wave a certain amount of guests through to the pre-show, a multi-media show plays overhead discussing the dinosaur age and their extinction. Painted displays of life on earth millions of years ago and the time when they said dinosaur extinction came about with an enormous meteor impact are lit up as the discussion nears those points. Soon, you're waved in to the pre-show room, where you are welcomed into the Dino Institute by Dr. Seeker (actor Wallace Langham) and his boss, Dr. Marsh (Phylicia Rashad). After his slightly deceitful conversation with Dr. Marsh, Seekers directs you onward to your time rover vehicle, where he needs YOU (and you and you and you) to travel back to the Cretaceous period and bring back a tagged iguanadon. Then, the doors open up and you and the others in the room head downstairs to board the 12 passenger all-terrain time rovers. Before you know it, you are back in the Cretaceous and on your way in a wild, herky-jerky expedition to bring back that iguanadon. Along the way (and basically entirely in the dark), you will encounter a variety of dinos (some deadly, some not) before you get to your own.....but will you survive the meteor crash and get back to the present in time, or will you join the dinos in extinction? - - - I think we all know the answer to that.

* My Take on Dinosaur

Dinosaur is one of those rides I MUST do, usually multiple times on every Disney World trip I go on. It's that good. Between the much improved dino animatronics (in comparison with those in the Universe of Energy at Epcot), the wildness and jerkiness of the overall ride with sudden dips, turns, and jolts of speed, and the scary finale (with photo op), it really is a great deal of fun. I can't recommend it enough, and at just under 3 minutes in length, it doesn't feel like too much, or that you're getting gypped with an overly-short ride, either.

However, it's not necessarily a ride for small children, those prone to motion sickness, or those with back or joint issues. When I say it's "wild and herky-jerky", you'd better believe it. You and your neck get whipped around all over the place throughout the ride. If you can take that kind of experience, you'll probably love this ride as I do. If not, you may want to sit it out. As far as small children are concerned, it may be too rough for them, and if they have issues with the dark, it may terrify them....not to mention some of the larger, more noisy dinos you encounter along the way.

POINTS OF INTEREST: Early in its existence in Animal Kingdom, Dinosaur was once called "Countdown to Extinction", however when the Disney film of the same name came out back in 2000, the attraction name was changed to coincide with the movie....and it stayed that way ever since.

First named Countdown to Extinction before the release of Disney's movie "Dinosaur", this simulation ride travels you back in time to pick up a dinosaur and bring it back to present day.

For any fan of dinosaurs, this ride does a great job of getting you to feel like you are really in the age of the dinosaurs. While trekking through the forest to find your dinosaur, you come across several different types of dinosaurs as the meteor attack that killed the dinosaurs nears.

Danger strikes at the end, but your fate is in the hands of the scientist that sent you back in time for the dinosaur.

The ride is one of the most thrilling rides that I have ever been on that isn't a roller coaster. There are no high drops or crazy fast speeds, but the experience comes from all of the different twists and turns that the simulation leads you on.

Last note - make sure to place small children in the middle of the vehicle because the ride is a bit dark, and the dinosaurs throughout the ride do create one of the more terrifying experiences at Disney World.