Behind the Ride: Indiana Jones Adventure at Disneyland 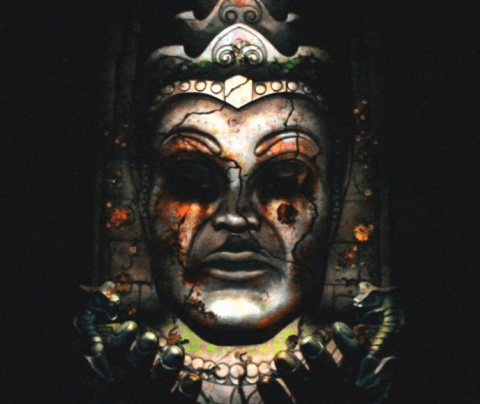 Hidden away in the dense forests of Disneyland’s Adventureland stands an ancient, crumbling temple laced with faltering excavation lamps. The year is 1935, and you're in just the right place. Long believed to be only a legend, the towering Temple of the Forbidden Eye has been uncovered by famed explorer Indiana Jones. Within, Indy has stumbled across crumbling statues, ancient hieroglyphics, and fading frescoes that tell of the temple's storied past.

Supposedly home to the ancient lost god Mara, legend has it that any who ventured to this perilous place would seek an audiencea with Mara by standing within the Chamber of Destiny, where they would face three locked doors. The benevolent Mara would peer into the soul of his followers and open one of the three doors, leading to one of his three gifts: eternal youth, earthly riches, or visions of the future!

But there's more than meets the eye with this double-dealing deity! Throughout the sprawling temple complex of tombs, catacombs, and caverns, all of the carvings, paintings, and statues of Mara always depict him with his eyes closed or covered... A curious precedent matching word among the locals that within the Chamber of Destiny, any who looked into the dark and corroded Eyes of Mara would forfeit his gift and be cursed instead to the Gates of Doom for all eternity...

A chilling tale, indeed... But not chilling enough to cool off the hot pursuit! So step into Adventureland, where you'll become one of the hoity-toity nouveau riche of Europe, drawn by the renewed promise of Mara and his three gifts. It's 1935, and anyone who's anyone has chartered a flight to the lost river delta where adventure awaits...

For more than twenty years, Indiana Jones Adventure: Temple of the Forbidden Eye has been a starring E-ticket attraction exclusive to Disneyland Park. Even two decades after it's opening, the ride remains the most enigmatic, pulse-pounding, and technologically advanced ride that the resort has to offer... It may also be the most mysterious. In today's Behind the Ride, we're descending into the forgotten temple of Mara to look behind the magic to see what brings the cursed temple to life. First, we'll discuss the incredible story behind the ride's creation. Then we'll head into the temple to tackle its dark mysteries one at a time. If you're ready, then strap in...

Indiana Jones Adventure is huge. So huge, in fact, that when Imagineers first reported their ride specifications to management, they were told that the only pad of land large enough to hold the ride's massive showbuilding was in Tomorrowland, so they would just have to make that work.

Obviously, Imagineers would sooner not have an Indiana Jones ride than place it in Tomorrowland, so they did something unusual: they built the ride's showbuilding (one of the largest and tallest in the park) on the former site of the Eeyore section of Disneyland's original parking lot. 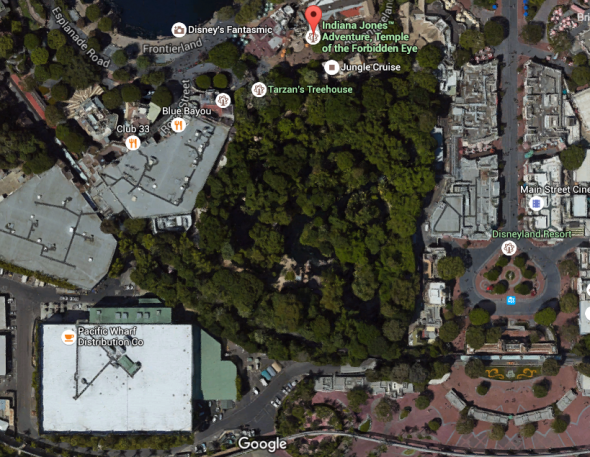 In the image above, the queue line for Indiana Jones Adventure begins roughly at the red pin point at the top of the map. The rectangular white showbuilding in the lower left is where the attraction takes place. Like many of Disneyland's dark rides with their showbuildings situated beyond the park's railroad circumference, Imagineers faced the task of getting guests under the roadroad (a challenge undertaken by the Stretching Room in the Haunted Mansion and by drops on Pirates of the Caribbean).

However, getting under the railroad wasn't the only issue for Indiana Jones Adventure's designers to tackle. From Adventureland to the ride's boarding area is nearly a half mile walk.

If Imagineers wanted guests to pass seamlessly under the railroad, alongside the Jungle Cruise, and out into a showbuilding located in the parking lot, they needed to do it with some finesse. And luckily, they had plenty. Indiana Jones Adventure might have the most detailed, elaborate, and gorgeous queue line of any attraction at any U.S. theme park.

Disney often refers to their queue lines as 'Scene 0.' Part of the production, but not yet the attraction itself. Especially in recent years, Disney has gone out of their way to make their queue lines interactive, engaging, and even fun. On rides like Magic Kingdom's Haunted Mansion or Space Mountain or Many Adventures of Winnie the Pooh, the queue can feel like part of the experience, encouraging guests to hang back and interact with the story even before they board.

With Indiana Jones Adventure, they already have a pretty stunning set-up. 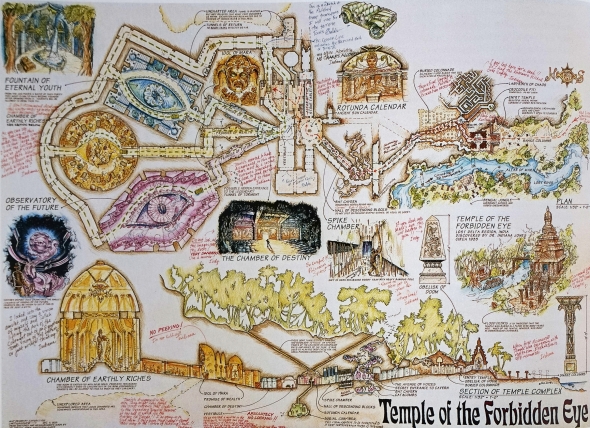 For one thing, the queue line of Indiana Jones Adventure fills in the integral details of the story. The trek to the show building beyond the park's berm is nearly a half-mile long, and Imagineers use every square inch of it. En route to the ride, guests walk through chilly, dripping caverns, collapsed hallways, grand rotundas, and simple altars all built to honor the ancient Mara. Curiously, each painting, carving, or image of Mara depicts him with his eyes closed or covered...

With each successive image of Mara – eyes closed – you might begin to imagine that the ancient legends you've heard are true: that anyone who so much as glances into the eyes of Mara will be cursed to eternal torment and never leave the Temple of the Forbidden Eye...

One particular image of Mara directly inside of the crumbling temple facade is a daunting and gorgeous fresco of the god – eyes closed – holding a sacred object for each of his three gifts: an all-seeing eye, a vase of the waters of youth, and a chalices of gold and gems. 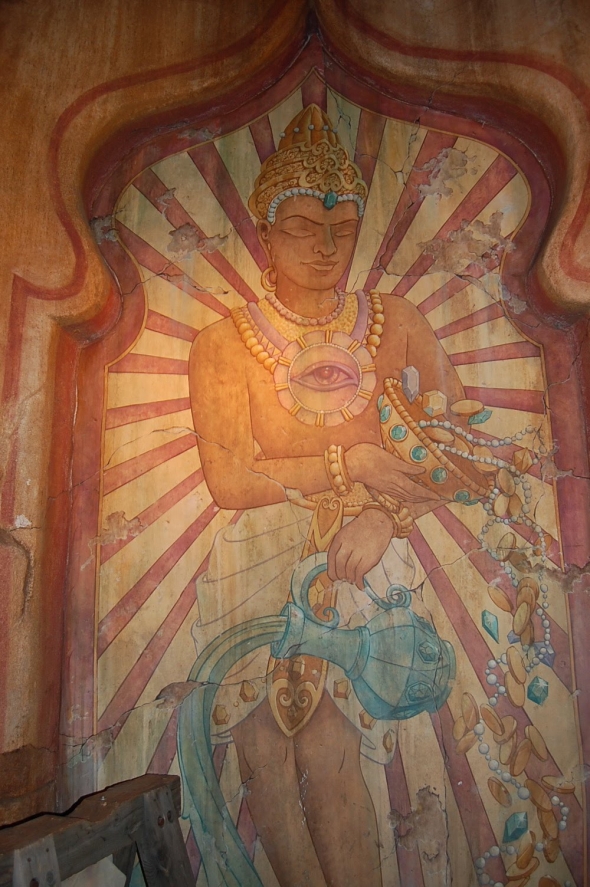 But the queue informs the story on more than just a simple level. Guests with a penchant for deciphering (or a decoder card, as offered during the ride's first seasons) can spend hours decoding the ancient hieroglyphics (or, Maraglyphs) spelling out pages and pages of details, backstory, and legend, carved into every wall and every surface.

Many of those Maraglyphs warn of booby traps in the adjacent chamber. Some have been humorously triggered and neutralized by Indy and company, while some are waiting for an unfortunate soul to accidentally trip them (including a shriek-inducing spiked-ceiling that lowers onto queueing guests). Other interactive elements within the queue involve a few different ways to disturb scientists hard at work in their excavation of the temple.

But the queue is more than just a storytelling element. It's also beautiful. Traveling through collapsed chambers open to the sky above, bat-infested caverns, narrow corridors, the makeshift offices for Dr. Jones (loaded with props and details that will leave fans drooling), and – most impressively – a grand rotunda featuring one of the more haunting images of Mara looming before what appears to be a snake-flanked rope bridge... Hm. 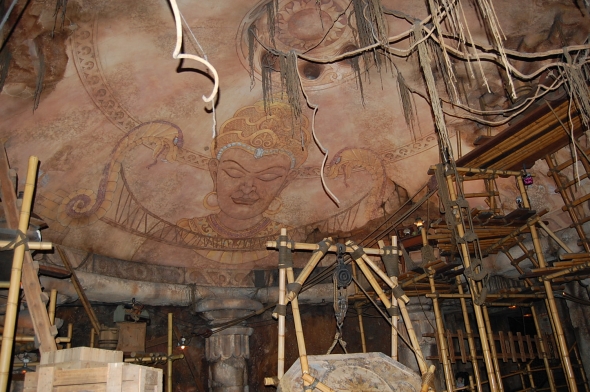 Finally, guests pass into a towering ancient chapel, now filled with scaffolding and used as a makeshift tourist training zone. (It's in this room that eagle-eyed fans armed with a flashlight will find a lonely Eeyore sign leftover from the former parking lot immortalized in the rafters.) This grand chapel is now home to a flickering overhead projector playing black-and-white videos spliced together by Sallah offering final words of wisdom (a cleverly disguised safety video) and some advice:

"One final word of advice: once you enter the Chamber of Destiny, look not into the Eyes of the idol! That would be dangerous... VERY dangerous. And now my friends, your moment is drawing near! Already I am envious of the wonders that await you... IF you avoid the Eyes of Mara that is."

From there, guests are dispatched into the final antechamber before the Chamber of Destiny where trusty troop transports left over from World War I are waiting...

Now that we've discovered the unimaginable scope of the Temple of the Forbidden Eye and the creative wonders behind it, it's time to descend into the adventure. We're miles from civilization in the heart of the temple, where trusty troop transports await to whisk us into the unknown. So strap in and read on to see the incredible effects waiting for us in Mara's temple...

Riding the ride isn't nearly as exciting as reading about it. When I went last year, it sucked. First off, the ride kept having mechanical failures, second, you could barely understand what the God was saying over all the other noise, and as far as the vehicles go, if they are different, they move too fast for you to really notice.All in all, the ride could've been much bigger, much longer, and much better, giving people more time to take in the things ranter than throwing them about. Otherwise, it was good, and worth maybe a 10 minute wait, at longest, 15 or 30.

The unique personification of the ride vehicle itself sounds interesting, like the different vehicle reactions such as "being afraid of the dark". Something very subtle that I never noticed. I'm DEFINITELY going to have to check that out soon next time I go.