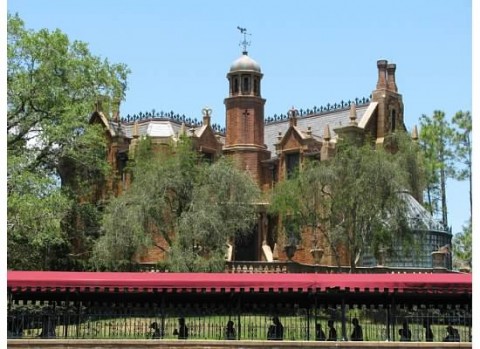 Theme Park Tourist writer Amy is a former Walt Disney World Cast Member, who once worked on the Haunted Mansion. Here, she offers an in-depth look at the popular attraction at the Magic Kingdom.

In 1969, Disneyland opened the first Haunted Mansion attraction to its guests. It was an immediate hit. Based on its popularity, a new Haunted Mansion would open with the Magic Kingdom in Orlando, Florida in 1971. Though the attractions are mostly the same, there are some large differences between the two American Mansions that allow fans to bicker over which one is superior. 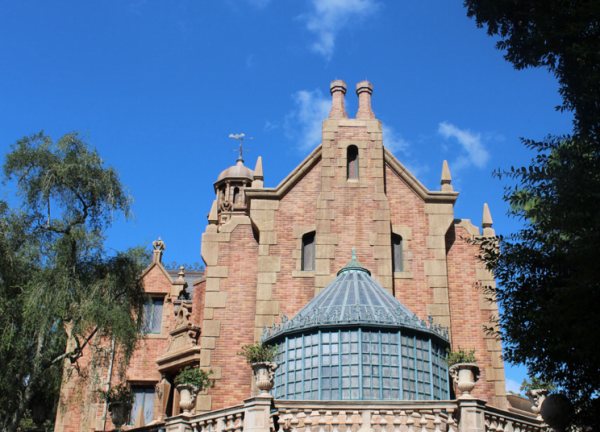 The Walt Disney World Haunted Mansion is a very intimidating building on the outside. Designed in the style of classic north-eastern Dutch Gothic Revival mansions, it is shaped in a way that makes the building appear to loom over the guests, almost closing them in. At night things really get spooky when, no matter the weather, thunder and lightning are always experienced. Also at night, a single light can be seen floating along one of the upper windows. This only happens every so often, so it pays to be patient when searching for this restless spirit.

The exterior has shown a lot of changes from its debut in 1971. Originally decorated with large, flowing trees, the Haunted Mansion now features much smaller tress that allow the guests to see more of the main house. In 2001, an addition to the exterior cemetery was added. Since opening, tombstones with amusing epitaphs were displayed just to the left of the main door into the mansion. Many of these tombstones were thinly-veiled references to the Disney Imagineers who designed the attraction. With the addition of a headstone for dearly departed Madam Leota, the graveyard was officially tied into the attraction. The truly haunting thing about this new grave marker is that the large visage of Madam Leota will move. Its eyes open and look around, and the face moves up and down, as if surveying the surrounding guests. 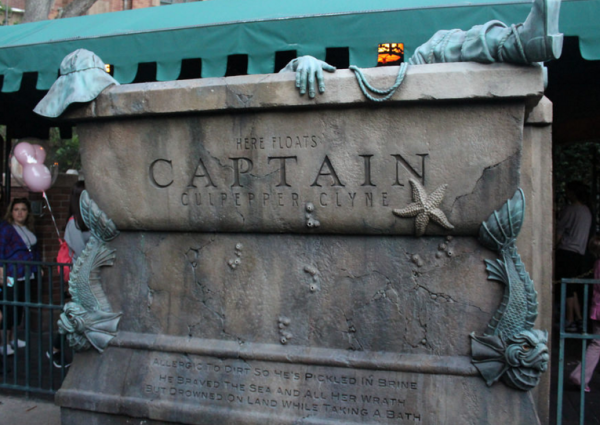 In early 2011, the exterior queue was redone to include a large interactive area. While this area can be bypassed for a quicker arrival at the front doors, it really shouldn’t be missed. Many recognizable characters from the mansion can be spotted here in various forms. The Sea Captain has a large tomb that makes gurgling sounds and squirts water. The composer from the library inside the mansion has a place where you can select different instruments to compose your own version of the attraction’s title song, “Grim Grinning Ghosts.” There’s also an area featuring several busts of a now-departed family. The members seem to have killed one another, providing guests with an interesting mystery to solve.

Inside the Haunted Mansion itself, much has changed since opening. The stretching portrait gallery, which was already quite scary, had its audio improved in 2007 to make the guests feel like the Ghost Host is circling above them. The gargoyles holding the candles now whisper to the guests as they exit, often encouraging them to keep together. As the guests make their way to the Doom Buggies, it becomes clear that other areas of the big spooky house on the hill were changed in 2007 as well. The large framed pictures that once held residence in the first hall are now hanging in the load area. These paintings are of resident ghosts with eyes that follow you. The corridor that formally housed these works now features windows that are periodically lit with lightning. When these flashes hit the new paintings in the hallway, the subjects become hellishly disfigured. 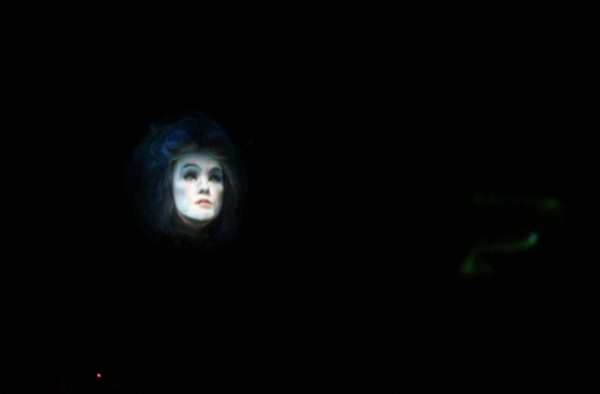 Further along, past the library and the lounge with the piano, is the largest and most noticeable addition to the updated Haunted Mansion. Looking like something out of M.C. Escher’s worst nightmare, this new staircase goes every which way. Not only are all the stairs hard to understand, but where are those green foot prints coming from? Even Madam Leota got in on the changes. Her once static crystal ball now mysteriously floats as she performs her séance.

Just past the interior graveyard is the most recent change to the Haunted Mansion, which came about in April of 2011. The classic mirror effect of the Hitchhiking Ghosts was updated to a new computer-based technology that completely changed how the interaction works. Before, it appeared as if the ghost was simply sitting in the vehicle with the guest. Now, the Hitchhiking Ghosts fully interact with visitors. Sometimes the ghosts remove the guests’ heads and swap them. Other times the spirits make the guests’ heads completely vanish. This change was one of the first in the future line of interactive elements that will soon be seen throughout the Walt Disney World Resort.

One of the most popular and bewildering special effects in the Haunted Mansion is the ballroom scene. While this is a very impressive illusion, it is a simple use of the Pepper’s Ghost effect that was first documented in the late 16th century. The figures that are seen are both below and above the Doom Buggies in different rooms. Between the Doom Buggies and the ballroom is a large piece of reflective glass. When the figures are lit, they appear to be strategically placed in the ballroom below because their reflection is seen on the glass.

An interesting fun fact about the ballroom dancers in the scene is that the figures themselves were designed to be dancing in the traditional style, with the man leading the woman. However, due to the reflective nature of the effect, it appears as though the woman is leading the man. Also in the ballroom, keep your eyes on the long dining table. There’s almost always at least one Hidden Mickey made up of the plates.

When you're visiting the Haunted Mansion, you may notice that the Cast Members here are strikingly different from the bright welcoming personalities you'll find in other parts of the park. Here, the maids and butlers are solemn and morose. Though some confused guests have taken this to mean that they don't enjoy working this attraction, this is simply another part of Disney's immersive theming. In fact, the Haunted Mansion is one of the most coveted attractions to work at in the Adventureland / Liberty Square area of the Magic Kingdom.