How does the Pepper's Ghost effect work at Disneyland? 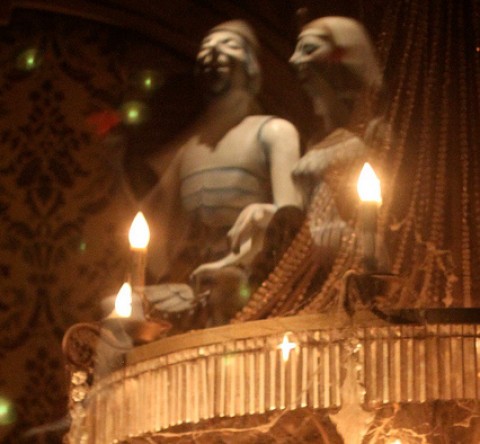 The Haunted Mansion has always been one of my very favorite rides at Disneyland. It’s such a complete experience with its outdoor queue, multiple rooms, walk-through section, “Doom Buggies” and spooky décor. The length of the ride is an added bonus for tired guests with sore feet!

While every detail of The Haunted Mansion is, ahem, to die for, I’m pretty sure that most of us will agree that the ballroom scene is particularly special. 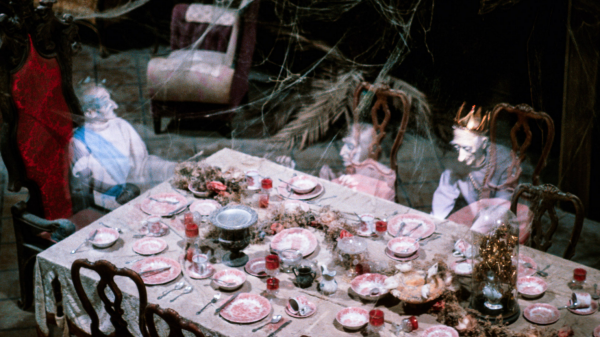 The Grand Hall plays stage to a dinner party, complete with birthday cake, music and dancing ghosts. I’ve always assumed that the ghosts were of a holographic nature. They’re not! They are part of an incredibly simple illusion called Pepper’s Ghost (also known as PGI), a term coined in the 1800’s by a professor of chemistry at the London Polytechnic Institute. The ghosts that you see dancing and celebrating in the Grand Hall are actually animatronic figures in black rooms above and below the mezzanine that your buggy is on. There is a gigantic pane of glass between the riders and the Grand Hall. A light source shines on the animatronics below, which reflects them off of the glass and makes it appear as though they’re actually in the Grand Hall.

If you want to test this method out for yourself (like I did last night!), follow the steps below:

Your object will be reflected in the glass in front of you! Now, imagine a tiny track of buggies passing in front of that pane of glass and you’ll get a clear idea of how Pepper’s Ghost works for the Haunted Mansion. 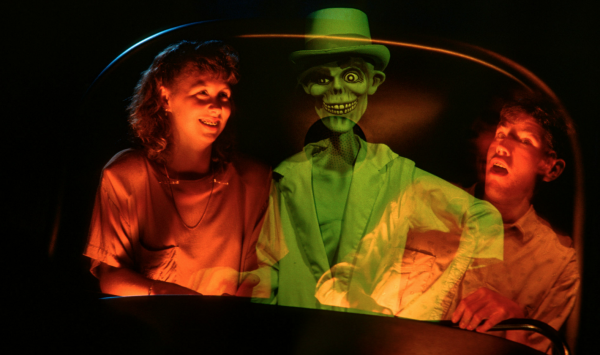 While being embarrassingly simple, the Pepper’s Ghost effect adds quite a bit of magic to both Disneyland and Disney California Adventure rides.

Pinocchio's Daring Journey – Keep an eye out for the illusion at the end of the ride when the Blue Fairy disappears. The fairy dust may be fiber optic lights, but the fairy herself is a mirrored reflection. The effect is showcased differently in this ride than in the Haunted Mansion because the Grand Hall ghosts don’t disappear. The Blue Fairy’s departure is created by dimming the lights in the hidden black room. 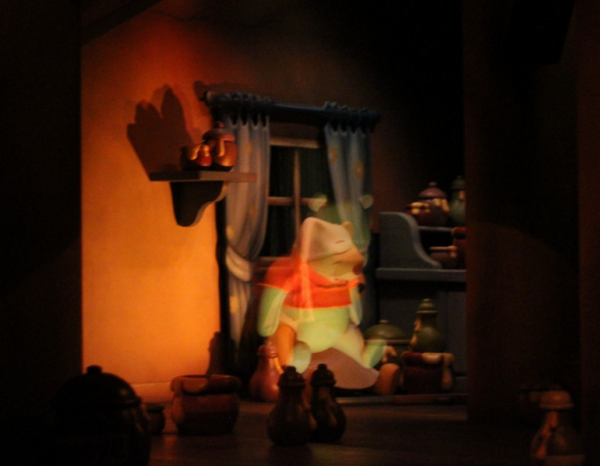 The Many Adventures of Winnie the Pooh – In the scene where you get a look into Pooh’s house, a dreamy Pooh bear rises from his sleeping body, appearing to be a translucent voyeur in his own nightmare about the most dreaded Heffalumps and Woozles.

Monsters, Inc. Mike and Sulley to the Rescue – The villainous Randall from the hit Pixar film, Monsters, Inc., does a little disappearing act in this Disney California Adventure ride. The Pepper’s Ghost illusion allows Randall to appear and disappear in the locker room where Mike and Sulley are protecting adorable little Boo.

Even as an adult, I’m still able to find magic throughout the Disneyland Resort. I’m going to keep digging and hopefully I’ll find even more rides that use this illusion (I’ve heard that the Disney's Hollywood Studios version of the Twilight Zone Tower of Terror uses Pepper’s Ghost at the first drop scene, while our Disney California Adventure uses a different scene altogether). My new goal is to somehow see one of these incredible animatronics-filled black rooms firsthand!

P.S. If you make your own Pepper’s Ghost illusion box, please snap a photo and share it on the Theme Park Tourist Facebook page. We would love to see your ghostly creations!