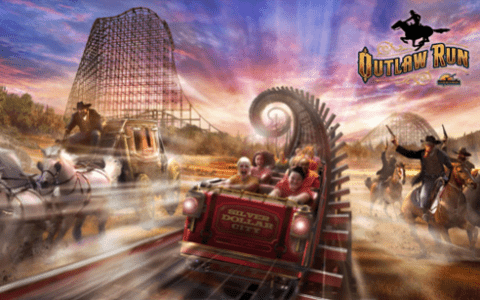 Branson, Missouri may be remembered as the birthplace of the new age of the wooden roller coaster. In the last few years, Rocky Mountain Construction has emerged as a de facto leader in the renovation of long-forgotten wooden giants. Their unprecedented retrofitting of Six Flags Over Texas’ Texas Giant in 2011 with steel “Iron Horse” I-Box rails earned universal praise for its concept and delivery. They’re at it again with Six Flags Fiesta Texas’ [Iron] Rattler, renovated with the now-signature striking red steel beams against some of the ride’s original wooden supports.

And while those rides are unprecedentedly successful in giving new life to lumbering wooden kings of old, the renovation makes those rides unmistakably and inarguably steel roller coasters, not wooden.

Rocky Mountain Construction has dealt in wood, though, adding its “Topper Track” to sections of existing wooden coasters, inserting steel track into the upper layers of laminated wood, reducing upkeep and providing a pleasant smoothness in “trouble” sections of aging coasters.

Still, the question remained – when would Rocky Mountain Construction design and construct their own roller coaster from scratch, and how would their dozens of interactions with the industry influence them? The answer is better than anyone could have expected. 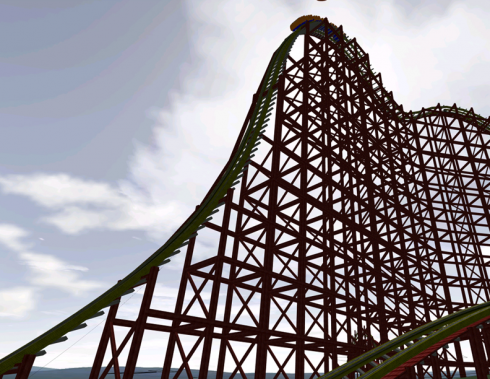 Enter Silver Dollar City, a 55-acre family park in Missouri themed to the 1880’s Ozark Mountain region that grew around the striking, natural Marvel Cave. Even with a number of high-profile roller coasters (like B&M’s Wildfire, Arrow’s Thunderation, and an incidental collaboration between Premier and S&S in Powder Keg), Silver Dollar City hardly seemed the place where wooden roller coasters would be reborn.

But on 15 March 2013, Outlaw Run opened. Using that Topper Track system that places steel layers into the upper layers of wood stacks, Outlaw Run is still definitively a wooden roller coaster, just with reduced headaches for both maintenance crews and riders. That clear distinction has to be made, because Outlaw Run does something that no other wooden roller coaster has successfully done – incorporate inversions.

During the “Coaster Wars” that premeated the 1990s and early 2000s, Paramount’s Kings Island near Cincinnatii, Ohio stunned the world when they opened the world’s tallest, fastest, second-longest, and only looping wooden roller coaster, Son of Beast with a stunning $20 million price tag. Neither the loop nor the roller coaster lasted (the former exiting in 2006, the latter lasting until 2009 before being demolished in 2012), but the match was lit – wooden roller coasters could go upside down.

Certainly the inclination was to believe that the constantly-innovating Intamin would quickly inject a loop into future installation of their pre-fabricated, Plug-and-Play wooden roller coasters (such as Colossos, T Express, and El Toro, which held the second, third, and fourth place records for speed and height after Son of Beast anyway).

But now, with Outlaw Run, Rocky Mountain Construction has stunned the industry with not one, not two, but three inversions – and none of them a simple vertical loop. 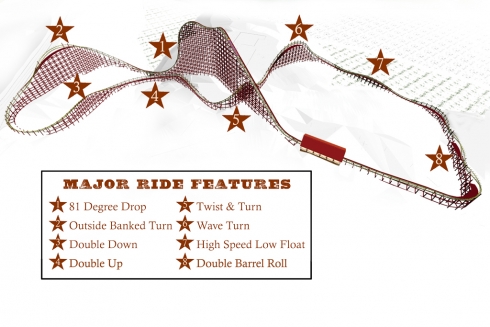 Outlaw Run has a 107 foot lift hill that dives down into a ravine for a 162 foot drop inclined at an unprecedented 81 degrees, resulting in an impressive speed of 68 miles per hour. From there, it pulls up into an outside banked turn at an again-unheard-of 153 degrees, turning riders completely upside down in a way that must be seen to be believed.

The coaster then rockets through a turn into a double-down followed immediately by a double-up, and then a banked hill that passes directly through the ride’s lift hill with rider’s turned completely on their sides. A race through the woods includes another stunningly-banked turn, a stretch of speed of bunny hills, and then two consecutive heartline rolls where there train twists effortlessly through an amalgamation of wooden planks.

And just that simply, Outlaw Run redefines the capabilities of a wooden roller coaster. It’s fast, it’s tall, it goes upside down, and it’s certain to be a fan-favorite and an award-winner. Outlaw Run also uses Rocky Mountain’s own wooden coaster trains with individual lap bars. 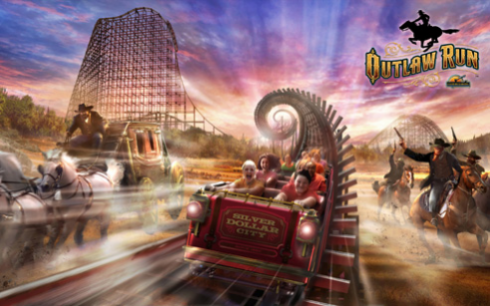 The implications of Outlaw Run are vast. Like Gardaland’s Raptor, the ride sets a precedent for what is sure to be future installations that build on the experiment. It also proves and assures the longevity that Rocky Mountain Construction is going to experience and brings this underdog to the top of the manufacturing game.

As well, Outlaw Run is almost certain to ignite something we haven’t seen in more than a decade – a race to innovate. If Rocky Mountain Construction can incorporate three inversions into a hand-to-God wooden coaster, then what will GCI’s first inversion be? What about Intamin? How will the leaders of today’s wooden coaster construction prove themselves? This has lasting implications not only for those manufacturers, but for the future of wooden roller coasters.

Rocky Mountain Construction has outdone themselves in their first solo-debut, and you can bet that Outlaw Run has set a new standard. Silver Dollar City has a real winner on its hands, and now has its name secured in the history books, too.

The 12 Most Revolutionary Prototype Roller Coasters of All Time