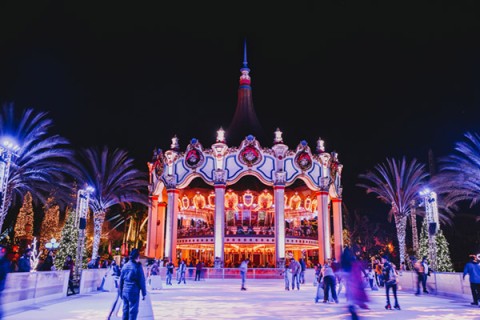 If you've been paying much attention to Theme Park Tourist over the past few years, you'll no doubt have read about the ups and downs of California's Great America – an amusement park located in Santa Clara, California.

In short, in 1976 (the American Bicentennial), Marriott – the hospitality company that today is best known for its hotels – opened two amusement parks, both called Marriott's Great America. Within a decade, Marriott had apparently tired of running amusement parks and sold both off. One (outside of Chicago) was acquired by Six Flags in the '80s and today remains one of the chain's flagship parks as Six Flags Great America.

The other – and the subject of interest today – changed hands a bit differently. In 1985, Marriott sold its Californian Great America to the city of Santa Clara itself. Since the daily operation of an amusement park goes well beyond the interest of most municipalities, it's no surprise that Santa Clara hired someone else to manage the park: the Ohio-based Kings Entertainment Company (KECO), who'd already proven their chops with Kings Island, Kings Dominion, and Canada's Wonderland.

In 1989, the city of Santa Clara sold Great America to KECO outright. But there's a catch... While KECO bought the park itself, the city actually retained the real estate is sat on.

Of course, in 1992, the Kings Entertainment Company was itself sold to Paramount Pictures, and in the same style as the sister parks it had been adopted into just three years earlier, the Santa Clara park was renamed Paramount's Great America. The result is that both Six Flags and Paramount owned theme parks called "Great America," and both with the same iconic entry, double-decker carousel, and even some of the same "lands" and rides.

With a recession on the horizon and in the midst of a corporate split (into Viacom and CBS), Paramount's parent company decided to exit the theme park business, too. In 2006, amusement park operator Cedar Fair (owners of Cedar Point, Dorney Park, Geauga Lake, and more) purchased the Paramount Parks. Each was stripped of its "Paramount's" prefix and its film references. To differentiate it from its long-lost Chicago sister, the Santa Clara park gained a new prefix: California's Great America. Which brings us to today.

For most of its life as California's Great America, it's been suspected that the Santa Clara park's time was short... Why?

First of all, location, location, location. Santa Clara is, after all, located in the Bay Area – one of the hottest real estate markets on the globe. Right smack in the region of San Francisco and San Jose, every single acre of land that can be developed in the Bay Area has been developed. And by most any measure, the land that the park occupies is almost certainly worth more than the park itself. In short, the uncomfortable truth has always been that the annual rent payment Santa Clara (remember, the land owner) received from Cedar Fair is a fraction of the revenue that the city could make from a one-time sale.

Speaking of land, one of the biggest opponents to Great America was the idea of what could be in the spot: a brand new stadium for the San Francisco 49ers NFL team. For years, rumors consistently ebbed and flowed that Cedar Fair was willing to exit it contract to operate the park early for the right price, and that the 49ers and the city were collectively willing to find that price to secure such an unusually large parcel of land with built-in parking – perfect for a stadium.

Those rumors came to a head in 2011 when Cedar Fair announced that they had agreed to sell the park to JMA Ventures for $70 million, signaling their intent to abandon Great America and allow the 49ers to move in. But by December, they'd reversed course, announcing that the deal was off. Instead, Cedar Fair had recommitted to operating Great America and continuing its annual $5.3 million a year rent payment to Santa Clara...

More to the point, it had reached a "mutually beneficial" agreement with the 49ers, who built Levi's Stadium next door in 2014, sharing Great America's parking lot.

You can see, then, why the future of Great America has always been uncertain... But in 2019, the city of Santa Clara announced that at long last, they had found a buyer willing to pay $150 million for the land Great America sits on. The buyer? Cedar Fair. In a massive transaction (which exceeded Cedar Fair's typically capital expenditure across its dozen parks combined), Cedar Fair officially reunited ownership of the park and the land it sits on. That might make you think that Great America's future was at last guaranteed... But not quite.

Certainly, the 2020 pandemic took a major toll on the tourism industry. Cedar Fair no doubt took a look at its own portfolio and began to wonder if some of its smaller parks might best be sold off, or closed altogether to consolidate their rides and send them off to other parks in the chain. And sure, parks like Michigan's Adventure or Valleyfair might not be stars in the park's chain... but they're also not very attractive to buyers. Great America, though? Talk about a payday...

In 2022, Cedar Fair announced that they had sold the land Great America sits on for $310 million (more than twice what they'd paid for the real estate three years earlier, representing a significant boon to the company). The buyer was Prologis – a "real estate investment trust" headquartered in San Francisco. As part of the sale, Prologis agreed to lease the land back to Cedar Fair for at least six years (with one optional five year extension thereafter). That means that anytime between now and 2033 at the latest, Cedar Fair will remove its rides (no doubt sending salvageable attractions to its other parks), leaving the vacant land behind.

The result is one of the first major, modern theme park closures we've seen in a very long time; when a corporate-backed, big-budget park of modern thrill rides – up to and including 2013's GCI woodie Gold Striker and 2018's headlining, single-rail RMC RailBlazer – will simply cease operation.

But the question is... leaving the land to whom? And that's where things get interesting...

We explore the rumors we are given by our sources and publish the best researched articles based on them.

4 Attractions We Will Miss Most From California's Great America