4 Attractions We Will Miss Most From California's Great America 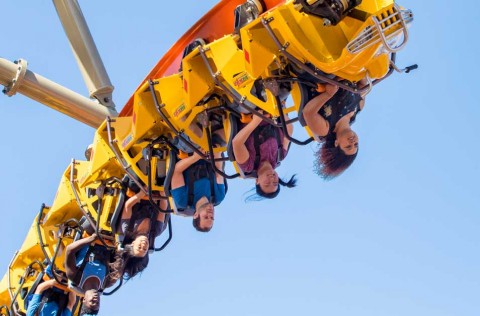 Sadly, earlier this month, Cedar Fair announced that they had sold the land that currently houses California’s Great America. Due to this sale, the park will be closing by 2033. We are sad that we will be seeing this park close its doors. At this time, it is unknown what will come of the attractions at the park, and whether Cedar Fair will choose to invest new rides into a park that essentially has an expiration date. That being said, let’s look at attractions from California’s Adventure that we will miss the most.

California’s Great America has some great rides and coasters like the traditional B&M inverted coaster, Flight Deck, and B&M floorless coaster Patriot. The wooden coaster, Gold Striker, regularly makes many enthusiasts' lists for the best wooden roller coasters in the United States. While these are great coasters and they will be missed, they haven’t made our list as you can ride other very similar coasters in many other parks throughout the country. For our list, we are looking at four of the more unique rides that currently call California’s Great America home.

RailBlazer is the first of its kind on the west coast. RailBlazer is a Raptor Track single-rail steel roller coaster manufactured by acclaimed roller coaster manufacturer Rocky Mountain Construction. Currently, only five of this type of coaster exist. The 8-passenger, single-file trains glide along 1800 feet of track. Riders are sent over a 106 ft tall vertical drop and reach speeds of 52 miles per hour. The coaster also features three inversions and ample airtime. The single-rail coaster offers a fun and intense sensation for riders, and has been very popular since its opening in 2018. We hope this coaster will one day find a home at another park.

This ride will have a different name depending on which station you board the ride from. While a gondola ride isn’t inherently unique, the fact that this style of ride seems to be a dying breed means we will miss one of only a handful still operating. The cable car ride offers 360-degree views of the park and it is an original ride from when California’s Great America opened back in 1976. Unfortunately, the fact that many parks have removed their gondola rides doesn’t make it seem hopeful that this one will be relocated, however, we can still hold out hope.

There are currently less than five parks in the United States that have rides based on video game franchises, making Mass Effect: New Earth almost one-of-a-kind. This 4-D adventure utilizes water, wind, and smell effects in addition to live actors. It accommodates 80 people and uses a custom 60 ft tall LED screen. The ride manufacturers consulted with the game publisher while making the ride, and the ride incorporates characters from the franchise. This is a ride that is entertaining not only to die-hard fans of the games but also to those who have never played a single video game.  While this game franchise is popular today, it's hard to tell if it would draw in enough interest in several years when the park is possibly set to close, making its relocation a definite unknown.

Tiki Twirl, formerly called Survivor: The Ride, is a great attraction that makes our list for its fun theming and the overall family-friendly thrills it offers. The ride incorporated drums, music, and giant tiki torches. It features a spinning disc that seats riders in a circle, facing outward. The disk then begins to spin and travel back and forth along a track with a small bunny hill in the middle. This hill offers some fun airtime as the riders are sent spinning back and forth. It is a great attraction for those looking to introduce more thrilling rides to younger kids. We hope to see this family ride relocated to another park.

What ride are you going to miss the most from California’s Great America? Let us know your thoughts by leaving us a comment below or on our Facebook page.