The KidZone Mystery: What Could Be Heading to Universal Studios Florida's Outdated Family Area?! 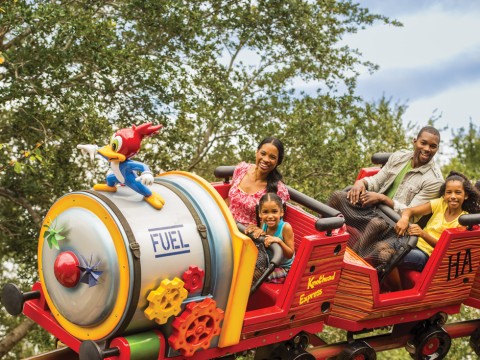 Rampaging giant apes. Terrorizing sharks. Cataclysmic earthquakes. Traveling back in time to be eaten by dinosaurs. It probably won't surprise you to learn that Universal Studios Florida didn't top the Orlando must-do list for families with young children in the '90s. In fact, Universal's Florida theme park had a serious reputation for leaving young ones paralyzed with fear, with only the Opening Day original E.T. Adventure as a brief escape from "Creature Feature" classics.

Little by little, Universal made efforts to increase their appeal to families – like 1992's Fievel's Playland (based on Bluth & Amblin's 1986 An American Tail) and 1995's "A Day In the Park with Barney." But even as plans were developing for an entire theme park that would play directly to Disney's family market (what would become Universal's Islands of Adventure in 1999), the original Studio park had an ace up its sleeve.

In 1998, Woody Woodpecker's KidZone made its debut, centralizing Universal's family offerings into a loosely connected collection that included E.T. Adventure, the Animal Actors stage show, "A Day In the Park With Barney," Fievel's Playland, the Curious George Goes to Town water play area, and Woody Woodpecker's Nuthouse Coaster. The hodgepoge section of the park is tucked away so well, thrillseekers may never even have stepped foot inside. But KidZone has been there for nearly 25 years, keeping some of the '90s biggest cartoon names in business!

Of course, fast-forward to 2022 and... well... let's just say that among children born in the 2010s and 2020s, the collective enduring pop culture footprint of Barney, Fievel, Curious George, Woody Woodpecker, and E.T. put together couldn't rival a single Minion. For the better part of the last decade, fans have wondered what could become of KidZone, and why – in an IP-obsessed, "Living Land" era – Universal hadn't yet pulled the trigger in replacing its dated kiddie campus with one of its more enduring, family-friendly IPs. Especially with two blockbuster animation studios under its umbrella, why was Universal Studios' kids area themed to Woody Woodpecker?!

Rumors swirled for years as potential projects were rumored for the KidZone site, but one by one, each faded into obscurity... until November 1, 2022 when (in a late-night social media post), Universal confirmed that aside from E.T. Adventure and Animal Actors, the rest of the attractions in KidZone would close on January 16, 2023.

What's next for the area? Obviously, Universal has not yet confirmed anything. Some sources even suggest that most of KidZone (like the Fievel dry playground and the Curious George water playground) will merely be rethemed to hotter intellectual properties rather than any significant new development or attractions coming online. But playing "armchair designer" for a minute, here are a few ideas that sound "just right" for a proper, large-scale reimagining of Universal Studios Florida's kids area...

Despite its long association with Universal (mostly through the Shrek 4D attraction that ran from 2003 to 2022), DreamWorks Animation was actually a division of the independent DreamWorks SKG until it went "indie" in 2004. From 2004 to 2016, DreamWorks Animation films were distributed by Paramount Pictures and 20th Century Fox. Still, Universal's acquisition of the animation studio in 2016 for $3.8 billion armed Universal with a Pixar-equivalent character library in the lead-up to today's Content Wars.

Certainly the biggest DreamWorks film franchises are Shrek, Kung Fu Panda, Madagascar, How To Train Your Dragon, and Trolls. In much the same way Universal differs from Disney, DreamWorks films tend to be a little more modern, on-the-nose, and "edgy" than Pixar's best, with celebrity voice actors, "Top 40" soundtracks, and the occasional fart joke. Obviously there's a place for it in the industry, and bringing these franchises to Universal Parks is a no-brainer.

Actually, Universal Studios Singapore has two immersive DreamWorks lands – a Far Far Away (themed to Shrek, but set in the world introduced in its sequels, above) and Madagascar. (Perhaps exemplifying DreamWorks' more timely films versus the timeless Pixar, the Madagascar land is already being leveled to make way for something newer and hotter.) Universal Studios Beijing dedicates an entire (indoor) land to Kung Fu Panda, anchored by a boat-based dark ride. Likewise, How To Train Your Dragon is rumored to be one of the four "Living Lands" at Universal's Epic Universe.

So how could DreamWorks be used in KidZone? Frankly, Shrek seems like the most timeless, intergenerational, and "theme-park-able" of DreamWorks' franchises, and lends itself well to an immersive land. Even a green, lush, shaded fairytale forest of spinning flat rides, a family coaster, a playground, and character meet-and-greets with a single dark ride would give Universal Studios a compelling Fantasyland equivalent, and give DreamWorks' most popular character a permanent home in U.S. Universal Parks.

Universal's home-grown animation studio as opposed to the purchased DreamWorks (basically, the equivalent of Disney Feature Animation versus the acquired Pixar), Illumination was founded in 2007. In the 15 years since its start, Illumination has produced a dozen or so films, but three clearly stand out as the studios' big franchises: Despicable Me, Sing, and The Secret Life of Pets.

As both the highest-grossing animated film franchise and the 15th highest grossing media franchise of all time, Despicable Me (and its spin-off prequel set, Minions) is Illumination's signature series. Universal Studios Hollywood managed to leverage the space around its Despicable Me: Minion Mayhem simulator into a mini-Minions land, thanks to a Super Silly Fun Land play area, the Silly Swirly Fun Ride spinner, and two Minion-themed eateries.

Universal Studios Beijing followed the concept through to its from-scratch, "Living Land" conclusion: an entire Minion Land (above) that supersizes the concept and includes a simulator, roller coaster, spinning flat ride, meet-and-greet, stage show space, and plentiful shopping and dining. Such an immersive, franchise-friendly land would probably be a shoe-in for Universal Studios Florida's KidZone...

Except that at Universal Studios Florida, the Minions are already accounted for thanks to a slow-but-steady takeover of nearly the entire Production Courtyard area. Between Despicable Me: Minion Mayhem simulator, a rumored Minions themed interactive attraction replacing Shrek 4D, and a Minion Cafe makeover to the fan-favorite Monsters Cafe, Universal Studios Florida's entry land will essentially be a Minion Street, U.S.A., or at least a mini Minion Studios.

Illumination's next biggest franchise is The Secret Life of Pets. Actually, the franchise does lend itself well to a theme park, with its cartoonish cityscape and the idea of pets on the loose. Universal Studios Hollywood also opened a Pets dark ride in 2021 – Secret Life of Pets: Off the Leash (above) – to resounding acclaim. You can also imagine how elements of Fievel's Playland and Curious George Goes to Town could be cleverly reskinned to the film's stylized New York, how the existing dark ride could be squeezed in, and how well the area would fit among the other "city-themed" lands within Universal Studios Florida.

Somewhat dulling the chances, though, Secret Life of Pets 2 underperformed when it was released in 2019, grossing only half as much as the first film at the box office. (That underperformance is allegedly what lead to the current "Omnimover"-esque dark ride in Hollywood versus earlier, more elaborate plans for a trackless dark ride.) Even still, the dark ride in Hollywood proves how "theme-park-able" the franchise is, and as the focus of a kids area, it would make for a dynamic environment that could house playgrounds, splashpads, obstacle courses, spinners, and more.