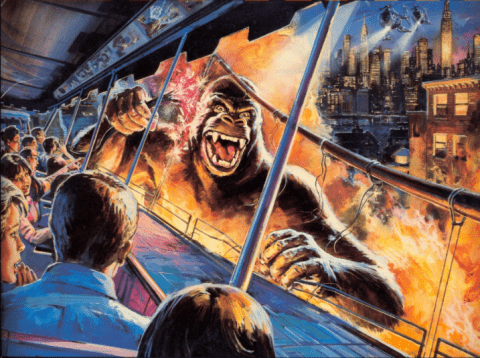 Lights, camera, action! In the modern history of Disney and Universal Parks, one thing is often said: good ideas never die. In fact, sometimes, ideas grow, evolve, and are reproduced across the country. Such is the case with the sixty-year tradition of taking pieces of Universal’s fabled Studio Tour in Hollywood and transforming them into full, standalone attractions in Florida.

In fact, some of the world’s most well-loved classics actually began in very different forms before being recreated on the East Coast in expanded, up-sized, and big-budget variations. If you didn’t already know it, you probably wouldn’t have realized from riding that these legendary attractions got their start in very different forms… So let’s examine the classic and contemporary groups of attractions to see where this cross-country strategy has paid off… and where it hasn’t.

Since 1964, Universal Studios Hollywood’s world-famous Studio Tour has been whisking guests through the real-life backlots of a really-for-real production facility. For sure, part of the Tour’s long-standing allure is the opportunity to see fabled sets (from Psycho to Desperate Housewives), actual behind-the-scenes landmarks left by celebrities and filmmakers, and the chance of catching a real hot set. In fact, the Studio Tour was the only ride at Universal Studios Hollywood in its first years, marking its opening as a “theme park” proper.

A staged flash flood special effects demonstration joined the tour’s list of sights in 1968. It was a sign of things to come. By 1974, real production facilities had become only half of the fun, joined by a growing list of staged special effects encounters like a flash flood, a runaway train (barreling headlong toward the stalled tram), a rockslide, an avalanche (a disorienting spinning tunnel), and the first of Hollywood’s all-star lineup of special effects extravaganzas that would eventually “graduate” to its own standalone ride in Florida…

After all, even before Universal’s plans for an Orlando park were made public, Disney was preparing a counterstrike. By fast-tracking their own studio park with a “Studio Tour” as its centerpiece, Disney hoped to scare Universal off. It didn’t work. Instead, Universal Studios Florida was redesigned to downplay a tram tour and instead split Hollywood’s best encounters into standalone rides in Orlando… Our first three are as classic as they come.

STUDIO SEGMENT: The 1974 disaster film Earthquake inspired a Studio Tour encounter of the same name in Hollywood. Trams would drive into a soundstage specifically designed for the attraction; a “hot set” recreating a San Francisco subway station. Cleverly parked on a gimbal, the tram would begin to shake just as the devastation began.

In a simulated 8.3 Richter scale earthquake, flood waters would race into the underground station, followed by cracking concrete pylons, a collapsing roadway overhead, a sliding gasoline truck, sparks, fire, and a derailing subway train barreling straight toward riders. In fact, Earthquake may be one of the most enduring examples of Universal’s special effects wizardry; a “kitchen sink” demonstration of all of its movie-making magic, resetting before guests’ eyes.

STANDALONE STAR: When Universal Studios Florida opened in 1990, Earthquake: The Big One had been promoted to a standalone attraction, expanded into a 20 minute look behind the camera. In fact, guests would be led through two pre-shows focused on the special effects behind the film and the industry, only stepping “into” Earthquake in the final act. There, guests would board an open-air subway train in a San Francisco underground station, advancing through a tunnel and into a recreation of Hollywood’s scene.

By the early 2000s, the 1974 film had been long forgotten, and digital effects were well on their way to dethroning practical ones. Universal Studios Florida’s standalone Earthquake attraction felt like a self-serious, hokey reminder of a long-lost era of moviemaking. In 2008, it was recast as Disaster!: A Major Motion Picture Ride… Starring You.

Disaster unapologetically leaned into the ride’s humorous side, casting guests as extras in a new B-movie produced by Disaster Studios (run by Frank Kincaid, played by Christopher Walken). Pre-shows became opportunities for audience participants to film their roles in Mutha Nature (starring Dwayne Johnson), with the subway finale reimagined as everyone’s chance to get in on the fun, viewing the final, compiled, laugh-out-loud trailer as the special effects reset.

The original Earthquake scene continues on in Hollywood, whereas in Florida… Well… we’ll get back to that in a moment.

STUDIO SEGMENT: The very year after Earthquake and its Studio Tour attraction, Universal was changed forever by the debut of Jaws. Steven Spielberg’s groundbreaking creature feature didn’t just scare a generation out of the water; it literally created the summer blockbuster.

The next year, guests on the Studio Tour would find themselves passing through the placid town of Amity, touring its shores just as a fisherman in a boat (today, a scuba diver) is mysteriously pulled into the harbor… Naturally, as the tram glides along a wooden boardwalk, the shark emerges, jaws snapping as it hungrily grazes down the length of the vehicle. Over years, the simple scene on the Studio Tour has been “plussed” with added effects including bursting gas tanks, upgraded sharks, and tilting dock.

STANDALONE STAR: When Universal Studios Florida opened in 1990, Spielberg’s 1975 film was given proper treatment as a standalone E-Ticket anchor of the park, removing the safety of the dock and instead stranding riders on open water. It was a brilliant concept and a clever way to make the tension of Jaws palpable.

Unfortunately, it didn’t work… Literally. Universal’s original incarnation of the ride was a mangled masterpiece of broken animatronics, a faulty ride system, and unthinkable effects (including, for example, the shark biting onto the boat and dragging it, and a grenade explosion blasting shark chunks into the air). The ride was entirely too ambitious, causing so much trouble for Universal that it was quickly closed after the park’s opening and entirely rescripted, rebuilt, and redesigned from scratch.

The resulting ride was a legend in its own right. In fact, the Lost Legend: JAWS took that simple Studio Tour encounter and created a demented take on the Jungle Cruise. A perfect blend of actual-tension and laugh-out-loud humor, the ride trapped guests on the murky waters of Amity with hidden Great White animatronics ready to burst out of the lagoon… I mean, how much cooler can you get?

Today: Like Earthquake, Jaws continues to terrorize studio visitors in Hollywood, but the fish has been fried in Florida where Diagon Alley took Amity's place.

STUDIO SEGMENT: Without a doubt, Universal’s biggest creature encounter joined the Studio Tour in 1986. Based on Universal’s legendary King Kong (and probably most accurately, the 1976 film starring him), the Kong Encounter carried guests into the gritty streets of New York in the midst of a panic. A clever intro would see guests watch a newscast covering the raging ape’s destruction through apartment windows before the very helicopter filming his attack would crash into the electric lines next to guests!

The tram would then advance onward toward the Brooklyn Bridge, where an enraged Kong – shot by a military copter overhead – would grab the bridge’s cables and shake the tram, sliding it right toward his open mouth. The 30 foot tall, 7-ton animatronic figure (designed by Disney Legend Bob Gurr, no less) was the most advanced figure in the world for many years, giving Universal a must-see anchor attraction on par with Disney’s best.

STANDALONE STAR: It’s fitting that, in Florida, the ride was upsized even further into the Lost Legend: Kongfrontation. There, guests would board aerial trams from Roosevelt Island in an evacuation of New York, only to be caught in the creature’s banana-breathed path. Kongfrontation was the epitome of an expanded attraction, turning the already-epic Kong Encounter in Hollywood into a full-fledged, massively-scaled, undeniable E-Ticket with a unique suspended ride system. In the ride’s finale, Kong himself would even tear the tram from its cable and drop it to the ground!

Today: Florida’s Kongfrontation closed in 2002 to make way for the Modern Marvel: Revenge of the Mummy. Like Earthquake and Jaws, Hollywood’s Studio Tour classic would likely have remained, preserving the trifecta of effects encounters in California… except that a devastating 2008 fire in Hollywood destroyed large swaths of the studio campus, including the original Kong Encounter… Kong wasn’t gone for good, however… and we’ll get back to that story soon… Read on…

You might want to do more research on Fast & Furious: Supercharged. While the Florida version did have a negative reception, the Hollywood version actually had a mixed reception.