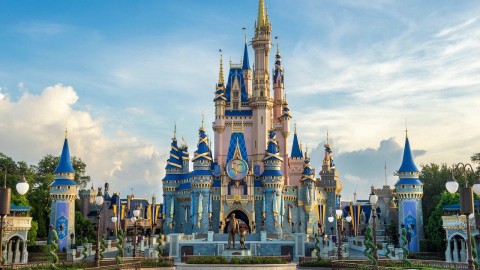 If you haven’t been paying attention to the serious business of theme parks over the last year, it might surprise you to learn that at least online, sentiment toward Disney World has shifted dramatically thanks to its 50th Anniversary year… and not in the way Disney hoped. Price increases are nothing new for Disney Parks, and a chorus of voices proclaiming they’re “priced out” is par for the course on Disney-centric social media… but the most recent wave of discontent – one wherein a quarter of Theme Park Tourist readers say they’re “done with Disney World,” and this time they mean it – is something quite different than the pouting and posturing that comes with annual admission price increases.

Something has fundamentally changed in the business of Disney Parks. Coinciding with the parks’ return from their pandemic pause, Disney began a fairly extensive effort to slash longtime perks and replace them with add-on upcharges – part of the company’s growing prioritization of per-capita revenue over its longtime key performance indicator: guest satisfaction. In fact, Part I of our Bursting the “Disney Bubble” mini-series explored those new costs and how they add hundreds of dollars to a Disney World vacation just to recreate what used to be included.

The good news is: we’ve been here before. This isn’t the first time Disney has pivoted its business toward net revenue by cutting costs, increasing prices, then trumpeting financial success to its shareholders. These eras always end when decades of loyalty crater, competitors rise, and families come home with the cost of the trip at the top of their mind and voice. When that happens and Disney is looking for advice on how to recover the decades of goodwill it’s lost, we have a few simple suggestions for how to improve the Parks experience, fast…

1. Get rid of Park Reservations!

We get it. When Walt Disney World and Disneyland’s parks reopened during the Covid-19 pandemic – when health guidelines strictly limited the number of visitors who could attend – the Park Pass Reservation system was a “necessary evil.” With parks limited to 30, 20, even 10% of their typical maximum capacity, the Park Pass system was able to cap the number of "slots" available each day based on many factors, while also distributing crowds more equitably among parks. The days of just buying a ticket and showing up at any park were over.

Even as pandemic restrictions were lessened, it was kind of nice to think that the Park Pass system might be used to combat the ridiculous and outrageous overcrowding that had plagued Disney Parks pre-pandemic. Even if Magic Kingdom could fit 100,000 guests, maybe setting a daily limit of 30,000 could improve everyone's experience! It's not a bad idea, and if that's how it were being used, people would probably be okay with the Park Pass system to this day!

But in case you haven't been to Walt Disney World in 2022, let us assure you: the parks are really, really, really crowded, with summer-sized masses during the "off-season" of January and February! That tells us plainly that the Park Pass reservation system is not being used to improve guest satisfaction or thin the crowds. At this point, its attendance cap is obviously high enough that it would really only be reached on say, the busiest 25 days of the year. And it wouldn't be a bad idea for the system to be used on those 25 days. For the other 340, though, it’s a needless frustration that reduces flexibility, keeps locals from visiting, and adds yet another complication to booking a Disney Park visit.

Of course, CEO Bob Chapek has already indicated that we should expect the Park Reservation system to stick around long after any other pandemic-era policies, even becoming a permanent part of a Disney Parks visit. It’s easy to imagine why. Park Reservations don’t do much for guests, but they provide Disney with a whole lot of Chapek’s favorite thing: data. Cynics might argue that with a precise, per-person count for each park on each day, Disney can adjust (see: reduce) staffing levels, shorten Cast Member schedules, reassign roles, cut entertainment, and under-staff restaurants to maximize revenue and limit costs. Frankly, Disney has no reason to end Park Reservations anytime soon.

When Walt Disney World’s theme parks reopened in June 2020, the Park Hopper option that allows guests to enter multiple theme parks on a single day was suspended. In a time with limited park capacity, even more limited transportation capacity, and a need to distribute crowds in adherence with Park Reservations, it made sense. When Park Hopper returned in January 2021, it was with a new caveat: no Hopping until 2 PM. If you squint, that kind of makes sense, too, as it means your Park Reservation actually mattered. You couldn’t just “reserve” EPCOT, then go to Magic Kingdom at 10 AM saying you “Park Hopped.”

But c’mon. If the continued Park Reservation system wasn’t frustrating enough, the seemingly-arbitrary 2 PM Park Hopper time is clearly no longer about health policies or capacity. Like Park Reservations themselves, the only remaining purpose of Park Hopping limitations is to benefit Disney.

Think of guests whose first Park Reservation is for Animal Kingdom or California Adventure. By effectively guaranteeing they won’t – can’t – go to another park until mid-afternoon, Disney is able to adjust those “half-day park’s” staffing levels for captive lunch audiences, then majorly cut back staffing starting in the second shift of the day since fewer guests hop into Animal Kingdom or California Adventure than out.

In 2022, we say – let the people Park Hop again. It’s an expensive add-on at Walt Disney World, and a pretty essential ingredient of visiting Disneyland where guests are meant to flow between the two parks all day long. Limiting guests’ ability to use the add-on they paid big bucks for is just yet another nefarious move that reeks of self-serving aims.

3. Bring back the Magical Express!

Another victim of Disney’s current push to reduce expenses and inflate revenue – apparently by any means necessary, no matter how many PR nightmares it causes – Disney’s Magical Express was a too-good-to-be-true, complimentary service that brought guests and their luggage from Orlando International Airport to their Disney Resort Hotel. It was the kind of thing you wouldn’t expect from even the most luxurious, all-inclusive resorts, yet Disney did it for all – no matter Value, Moderate, or Deluxe.

We dedicated a whole feature to the end of Magical Express and how to get to the resort without it. Think about it: its whole point was to “trap” guests on Disney property without having rented a car (thereby ensuring they wouldn’t leave the “Disney Bubble” at all during their stay). The rise of rideshares defeated the purpose. In other words, Disney had no financial incentive to underwrite your ride to the property if you can just turn around and get a Lyft to Universal anyway. So, away it went.

So yes, technically, the Magical Express was all part of creating a Disney-captive audience. And sure, new services have arisen in its wake – like Mears Connect (the “unbranded” continuation of the service) and the new Sunshine Flier – and there’s always rideshares and taxis and rental cars. But frankly, the Magical Express wasn’t just a “free ride.” It was a welcome mat; an “over-the-top” guest-focused introduction to the resort; a worry-free assurance that you would get to your resort safely and quickly and comfortably. It was an example of Disney’s “premium” product that no competitor dared to match.

Sources say that Disney is surprised that the “Magical Express” thing hasn’t blown over by now. Surely, they expected the standard level of Internet outrage at the service’s initial discontinuation, but that eventually, folks would move on. Trouble is, they aren’t. That makes sense! After all, a generation of Disney vacationers got used to the Magical Express… and most of them haven’t even learned that it’s gone. The point is, if you think Magical Express was important and hate that Disney took it away without reducing your hotel price to compensate, then take opportunities Disney provides – like surveys, reviews, and Guest Services – to voice that! (Just remember: always be kind to Cast Members. Always!)