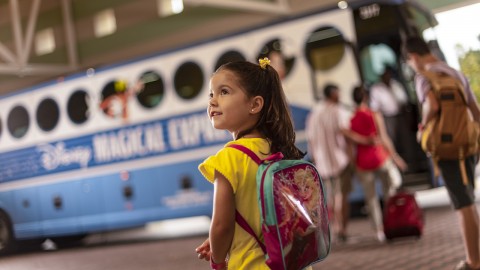 Another "magical" perk of a Walt Disney World vacation is about to go belly up, and the ease and convenience of the "Disney bubble" is that much closer to popping... As with most "conveniences" at Walt Disney World, Disney's Magical Express was more than just an amenity; it was one piece of a larger strategy to insulate Disney's "walled garden," with Disney alone orchestrating what comes in... and what goes out. Here's the story on Magical Express and its end, plus how you'll be getting to Disney World come 2022.

When Magical Express launched in 2005, the world was a very different place. The first iPhone was two years away. The App Store did not exist. Only 6% of American households were "cellphone only." And at Disney Parks, the time was right to initiate a major marketing push. Coinciding with Disneyland's 50th Anniversary, the "Happiest Celebration on Earth" was Disney World's invitation to return to the resort after years of tourism's decline in the wake of September 11, 2001. Expecting an onslaught of attendance, Disney cleverly conceived of a few new tools meant to not just get people to the property, but to keep them there.

So, for example, in 2005, Disney launched "Magic Your Way" Tickets – a then-new system of build-your-own ticket packages allowing guests to choose a base ticket armed with a number of days of park admission, then opt into extras like Park Hopper, Water Parks, Pleasure Island, and DisneyQuest a la carte. Naturally, this was the origin of a clever caveat: "The Longer You Play, The Less You Pay Per Day." (Don't cry, but in 2005, a 2-day ticket was $119, and a 7-day ticket was $199.) While deep discounts incentivized longer park packages, they also ensured guests would book longer hotel stays on property.

And of course, Magical Express would be the amenity to get them there. It sounds too good to be true: arrive at Orlando International Airport and just follow the convenient signs. Before you're even off MCO property, you're wrapped in the warmth, comfort, assurance, and ease of the "Disney bubble." Your bags will "magically" meet you in your room, with no waits at the luggage carousel. What a relief!

But more to Disney's point, you won't need to hail a taxi, and you certainly won't need to rent a car! Blegh! Nope. Disney will take care of it all for you... so long as you stay on site. And once there, of course, you'll be afforded the ease of Disney's internal transportation, which will take you anywhere you want to go...! As long as it's on Disney property, of course.

Okay, okay... The truth is, Disney has spent most of its modern history trying to keep guests staying, playing, and spending on site (and particularly, away from those pesky competitors at Universal Orlando). Magical Express was a cleverly disguised tool for making sure guests coming to Central Florida for Disney didn't accidentally stray on their way to property. By ushering guests to and from the resort, Disney ensured that the "walled garden" was never breached. Problem is, like it or not, it has been.

How You'll Get to Disney World

Disney Parks historians may remember 2020 as the year Disney decided to give up its long pursuit of a captive audience. Frankly, it was probably bound to happen. Magical Express was a loss leader – a service that was worth running since it ensured guests would stay on-property and forego a rental car. Today, the "walled garden" has become a permeable one, with guests coming and going via app-based ride-hailing. And that means, in Disney's view (and no doubt made worse by limited capacity in a pandemic), the Magical Express isn't worth the cost of running anymore. So how will you get to Disney World come the service's end on January 1, 2022?

1. Ridesharing apps. A cavalry of Uber and Lyft drivers hover around Orlando International Airport and Walt Disney World in purpose-built corrals and with ready-made pick-up points. For many, ride-hailing apps will become the new de facto transportation options between MCO - WDW. On a typical day, transportation between the airport and, say, Disney's Pop Century Resort should run around $30. That's not bad for a whole family. But keep in mind that if you've got two adults and two kids with a carry-on and suitcase for each, a typical sedan will fill up quickly. Once you've arrivied, an Uber from Pop Century to Universal Orlando can run as much as $45, which may just drive some to the second option...

2. Rent-a-car. Disney spent the better part of the last two decades trying to convince guests not to bother renting a car, lest it be used to go to undesirable places like Universal Orlando, SeaWorld, or, y'know, local restaurants and shops. Now, Disney seems to have thrown their hands up and said, "Eh, fine! Rent a car if you want to!" And why not? After all, in 2018, Disney started charging guests staying on-site up to $25 / night for parking (which makes the "free parking at the theme parks for guests staying on-site" offer not seem like such a benefit...) So to Disney's thinking, rent as many cars as you want... you'll pay for it. Literally.

3. The Brightline train. The much-talked-about new service coming to Disney is the Brightline, a high speed rail service eventually meant to connect MCO to South Florida. One of its early stops is meant to be a new purpose-built station at Disney Springs. However, rosy estimates suggest the Brightline will begin running in the second half of 2023 (leaving at least 18 months without Magical Express or this service). It's also unclear how much this train would cost, how well-equipped it would be to become the de facto connection between MCO - WDW, or what Disney would do about potentially thousands of guests per day arriving at Disney Springs with luggage... when Disney explicitly does not allow luggage on their standard resort busses.

4. Off-site hotel transportation. Many off-site hotels offer a dedicated or shared shuttle from MCO and also offer shuttles to Disney World (though often just to one central-ish location from which you'd need to transfer, like Epcot or the TTC). If you're booking an off-site hotel, look for shuttle services to-and-from the airport and to-and-from Disney property. It's not as easy as Disney's own on-site system or as "magical" as Magical Express, but it'll get the job done.

5. Shuttles... including Magical Express? Magical Express isn't actually owned or operated by Disney; it's just a wrapped, licensed, and subsidized product run by reliable airport-transit company Mears. After the announcement of the service's end, Mears made an unusual press release of its own, suggesting it was as surprised by the service's end as anyone else. It's certain that Mears will continue to operate a round-trip shuttle to and from Walt Disney World after the Magical Express ends on January 1, 2022. It's just that Disney won't be subsidizing the price this time around, and probably won't license its name or endorse any service Mears decides to continue offering.

This much is certain... A trip to Walt Disney World is certainly not frictionless the way designers in the 2000s had hoped... If you want to dive deeper into Disney's modern quest to make guests' experiences more seamless, make the jump to our in-depth look at the MyMagic+ initiative and the MagicBands it created. As a result, the "Disney bubble" has, for many guests, burst. Now, expect your trip to, from, around, and outside of Walt Disney World to include a combination of services from ridesharing and taxis to shuttles and rental cars... and be ready to pay for it.

Thanks for this good article, Brian. Even though we drive to WDW more often than we fly, I was surprised at how sad I was to hear that the Magical Express was being discontinued. The couple times we've used it, it felt like being welcomed in a special way, and like the fun part of the vacation had begun. It will be interesting to see how dynamics change as a result of more guests having their own cars. And I've heard the Brightline could go all the way to Tampa, making Busch Gardens a potential vacation stop for more families.