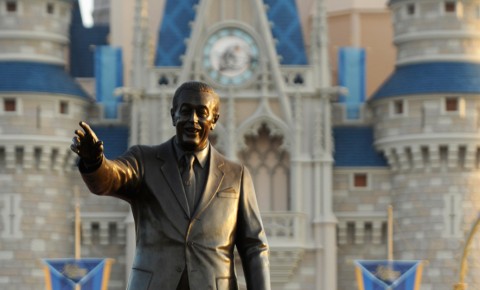 With the 50th Anniversary of Walt Disney World upon us, fans of the resort are finding a lot of reasons to look forward... and just as many to look back. Though Disney's own promotional campaign around the resort's half-century weirdly downplays the history of the "Vacation Kingdom of the World" in favor of modern characters, we can't help but stop and highlight remnants of Walt's time still around today...

It's true that Walt Disney himself never saw the completed "Florida Project," much less stepped foot into Magic Kingdom, EPCOT, Hollywood Studios, or Animal Kingdom. Yet despite opening nearly five years after Walt's death, Walt Disney World is still filled with Walt's fingerprints. To prove it, we've collected three attractions you'll find in Central Florida that have been honored with Walt Disney's official seal of approval – his name. Whether you consider these the three "best" things Walt Disney ever imagined, they are forever immortalized with his name... and that has to mean something!

Inspired by Hawai'i's statehood in 1959, the "Tiki Craze" that swept the country had seen Polynesian patio furniture, island music, Hawaiian shirts, and Tiki bars spread around the globe. Naturally, Walt wanted in on the action. To hear Imagineer Rolly Crump remember it on his column in the Disney Dispatch, Walt liked John Hench's concept art for a restaurant with diners positioned below caged tropical birds except for one thing: "You can't put birds in there, John. They'll [poop] on the food."

Convinced by the notion of using mechanical songbirds instead, the Tiki Room we know today was born. Initially opened June 1963 at Disneyland, the attraction famously served as the debut of Disney's patented Audio-Animatronics technology. Each bird, plant, tiki, and totem would move in sync to prerecorded audio, flapping, chattering, fluffing, and even breathing independently – far different from the simple, repetitive mechanical figures that had existed before.

When Magic Kingdom opened in 1971, its version – Tropical Serenade – introduced a whole new pre-show (and, though a partnership with the Florida Citrus Growers, the lovable Orange Bird mascot). Still, the super-saturated '90s saw the venerated, Walt Disney classic overrun with cartoon characters as The Enchanted Tiki Room – Under New Management. From 1998 to 2011, Iago from Aladdin and Zazu from The Lion King came aboard, turning the show into a slapstick spoof of the "boring" Tiki birds of old. A real life structure fire in 2011 taught Iago a thing or two about trampling one of Walt's landmarks.

Seven months after the fire, the Magic Kingdom attraction re-opened as... Walt Disney's Enchanted Tiki Room! The return of the classic show reunited Florida's version of the attraction with the modernized, slightly-slimmed-down version that had been playing at Disneyland since 2005. More importantly, though, the "Walt Disney's" prefix signaled that Disney understood the attraction's anchor status and would work to preserve it. Now turning 50, Walt Disney World's version is one of the authentic Walt Disney originals to call the park home.

After the landmark development of Audio-Animatronics technology, WED Enterprises (today, Imagineering) took the technology and ran. The very year after the Tiki birds' debut, Disney produced four monumental attractions for the 1964 - 65 New York World's Fair. As part of General Electric's pavilion, Walt and his team developed Progressland – a unique theatrical presentation in which an outer ring of auditoriums would revolve around an inner core of stages.

There, Disney's Audio-Animatronics would bring to life an American family, following their lives at the turn-of-the-century, the 1920s, the 1940s, and then "today" (the 1960s), at each step seeing how technological advancements (and of course, General Electric products) made life simpler for all. Of course, the whole experience was set to the sounds of the Sherman Brothers' "There's a Great Big Beautiful Tomorrow," promising that the future is worth hoping for. With a massive hourly capacity and a stunning technology, the show was a gargantuan success. At the end of the Fair, the attraction was relocated to Disneyland, debuting among the Space Age favorites of Walt's New Tomorrowland in 1967 as Carousel of Progress, even continuing GE's sponsorship.

Of course, GE's financial backing for the attraction hinged on its message – the efficiency of GE appliances – reaching new audiences. Especially at Disneyland with its heavily local audience, it's understandable that shows would have less repeat appeal than rides. After the opening of Walt Disney World – with its global reach and its international audience – GE requested that the attraction be relocated to Florida, where fresh potential customers could hear its message. It opened there in 1975 (sporting a new theme song – "The Best Time Of Your Life").

As part of Walt Disney World's New Tomorrowland in 1994, the attraction was reimagined with new voice actors, a new script, a new finale, and the return of "There's a Great, Big, Beautiful Tomorrow." The ride was also christened Walt Disney's Carousel of Progress. It's especially well-earned since Walt reportedly called the ride his personal favorite and decreed that it should never cease operation. Together with the Tiki Room, it represents an icon of Walt Disney's life lovingly preserved at Magic Kingdom. Even if it's time for another radical upgrade, the continued existence of Carousel of Progress is a very good thing.

Walt Disney called his land holdings in Florida many things: "Project X." "The Florida Project." Even "Disney World" – an intuitive way to express its size versus Disneyland. Only after his death in 1966 did his brother, Roy, decide that the larger property ought to be named as a permanent ode to the creative half of the Disney Brothers. Walt Disney World was born. (At least according to some, Walt Disney wasn't too keen on his likeness being used in the parks lest his personal identity overshadow the park's purpose – 1993's "Partners" statue ended that edict anyway.)

Today, it's easy to say "Waldisn'yworld" like it's one, made-up word. But especially as we celebrate fifty years of Disney's "Vacation Kingdom of the World," it's more important now than ever to remember the man behind it. It's also not a bad time to check in with your children, grandkids, nieces, nephews, and friends – even professed Walt Disney World fans – to ask if they know who Walt Disney was! After all, without Walt Disney, there would be no Walt Disney World. And indeed, it's one of just three things in Central Florida to bear his name!