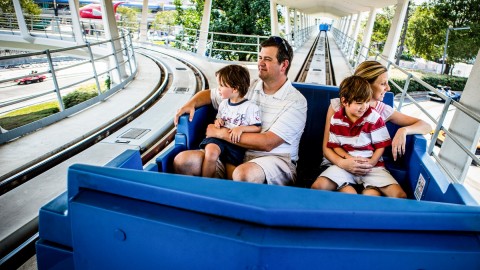 The only thing that stays the same... is change.

Year after year, classic theme park attractions simply flicker out of existence, replaced with new stories, fresh characters, and cutting-edge rides. It's sad to say goodbye... So what if we told you that for some Disney and Universal classics, you don't have to... yet? The attractions we've selected today might seem like they're gone for good... but actually, they can still be found if you know where to look! These rides are "Survivors," outlasting expansion and remaining to this day! Will they survive the decade? We'll just have to wait and find out...

Given that each of these attractions has disappeared from a Disney or Universal park, we'll including a link in each to an in-depth Legend Library feature telling the full story of the attraction's development, lifetime, and closure...! If you want to dig deep into Disney and Universal design history, make the jump to each of those features for the surprising connections and behind-the-scenes stories that bring the parks to life...

Say what you will about Universal, but one thing is certain: they certainly aren't shy about aggressively updating their theme parks. In fact, many accuse Universal of acting a little too quickly to cut attractions – no matter how beloved – the second a hotter intellectual property hits the box office. On the other hand, it's easy to see how a Universal Studios devoted entirely to flicks of the '70s and '80s might lack a certain cultural resonance for young people today, though.

Such is likely the case with the Lost Legend: T2-3D: Battle Across Time. Quite literally an in-canon mini-sequel to 1991's Terminator 2: Judgement Day (including the return of director James Cameron and the film's cast including Arnold Schwarzenegger and Linda Hamilton), T2-3D was unlike anything seen before: a fusion of live-action stunt show, 3D film, animatronics, special effects, actors, and more. Somehow improving with age (probably because its "dystopian" tech is literally all real today), the $24 million show was a fan favorite up until its closure.

In Hollywood, the attraction closed in 2012 so that its massive showspace could be repurposed into double-capacity theaters for Despicable Me: Minion Mayhem (with twice the throughput of Florida's, which has repurposed the Nicktoon Blast simulator). Universal Studios Florida's closed in 2018 to make way for a Universal-owned property – The Bourne Stuntacular. Though it's absolutely jaw-dropping in its own right, fans still mourn the loss of T2-3D... Of course, to see it, they need only book a plane ticket for Osaka! The attraction can still be found there in the park's New York section (where Florida tourists would expect to find Race Through New York).

It's true that Disneyland is not a museum, but the park has done a pretty stunning job of salvaging fan-favorite attractions that could just as easily have disappeared! For example, the park's Fantasyland still packs in five classic dark rides, including the Opening Day Original, Mr. Toad's Wild Ride. Based on "The Wind in the Willows" half of the 1949 post-War package film The Adventures of Ichabod and Mr. Toad, the wacky dark ride sends guests rumbling through Toad Hall in jalopies, experiencing Mr. Toad's "motormania" as he crashed through London's wharfs, pubs, and town squares. The ride also memorably ends... with guests being struck by a train and coming to Hell, surrounded by red demons with pitchforks.

Basically, the fact that Disneyland's Mr. Toad's Wild Ride exists at all – much less that it has been persevered for nearly 70 years – is a testament to how sacred Disneyland is. While we're certain Imagineers have been tasked with at least considering turning the space into a Tangled or Frozen dark ride, little Mr. Toad continues to buzz around town, now practically an icon of Disneyland's commitment to the classics.

The ride was one of many that were intentionally upsized for Magic Kingdom, opening in 1971 with two separate-yet-intertwined routes processing twice as many guests per day! We even took a ride through the making of Magic Kingdom's version in our Lost Legends: Mr. Toad's Wild Ride feature. However, the double-sized space was too great an opportunity to pass up in the '90s, when a certain profitable Pooh Bear was pressed to build a ride and an accompanying gift shop. At least the amphibious hero lives on at Disneyland – a ride fit for a bucket list!

Just two years after Japan's opened, the closures began. The Californian version of the ride was gutted so that its soundstage could be converted into a West Coast version of the Modern Marvel: Revenge of the Mummy. (Hollywood's ride is much different from Florida's, largely because it had be downsized to fit into the E.T. Adventure building that was much smaller than Florida's vacated Lost Legend: Kongfrontation). In Japan, E.T. Adventure closed after just eight years. In 2009, it became Space Fantasy: The Ride, an original spinning coaster you've got to see to believe, and just the kind of ride we'd like to see Universal Orlando consider.

The result is that just one E.T. Adventure remains – the original at Universal Studios Florida. In fact, it's the only Opening Day Original left at the park... Given that the ride sits in a very large showbuilding right on the edge of the park's very tired KidZone (which is largely seen as an obvious expansion pad), it's worth keeping your fingers crossed that E.T. Adventure sticks around... and maybe savoring your next ride just in case...

Disneyland's Submarine Voyage opened in 1959 as one of three brand new rides to debut in Tomorrowland on the same day, each designated the first-ever "E-Tickets." The incredible attraction sent 38-passenger subs sailing through the crystal clear waters of Tomorrowland on a research mission, passing through progressively-"deeper" ecosystems like coral reefs, ship graveyards, and lost cities. When Magic Kingdom opened in 1971, submarines weren't quite the stuff of "tomorrow" anymore, so the ride was cleverly relocated to Fantasyland with a new, literary spin – the Lost Legend: 20,000 Leagues Under the Sea: Submarine Voyage. Both Submarine Voyage rides closed in the '90s, when the financial downfall of Disneyland Paris doomed the high-cost, low-capacity attractions. And that, it seemed, would be that...

In 2005, a major shakeup on Disney leadership and the management of Disneyland Resort saw a major shift in thinking. As part of the park's 50th Anniversary celebration, Disneyland announced that their submarines would return... now just attached to a high-earning box office property! The Finding Nemo Submarine Voyage opened in 2007. It seems a little silly that such a groundbreaking, showstopping ride system is essentially just used to shuttle guests past underwater screens with cartoon characters, but nonetheless, the survival of a Walt-original ride system is pretty commendable!

Even the surviving Submarine Voyage has some major hurdles to its long-term survival though... For one, the ride is still very costly to operate relative to a pretty low hourly capacity. It's also somewhat problematic in drought-ridden Southern California. And probably most problematically, the ride is huge – quite literally, one of the largest showbuildings in any theme park – meaning that closing this one ride could essentially add an entire land to cramped, landlocked Disneyland... Gulp.

Given how much is leveled against the ride, it's really no surprise that fans expected the COVID-19 pandemic to be the death knell of the Submarine Voyage. Its cramped quarters and recycled air could very well have been the last nail in the coffin. And indeed, even when the parks re-opened from a 14-month closure, the Submarine Voyage did not return... Shockingly, though, construction walls added around the lagoon in July 2021 promised the subs would "Resurface" that winter. It seems to be another Hail Mary save for the subs at Disneyland... but we'd still say it's worth riding while you can.