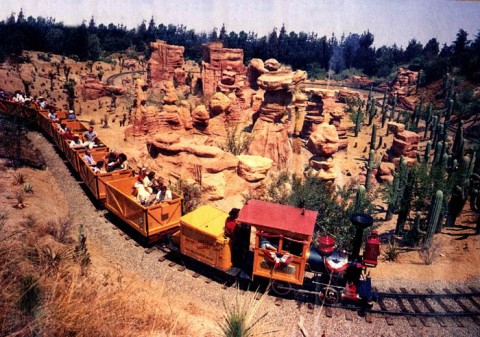 Long before the wildest ride in the wilderness gave guests a runaway tour of the red rocked Southwest, Disneyland offered a more serene way to see the sights and wander through the wildlife of North America...

For a generation of Disneyland guests, Mine Train Through Nature's Wonderland was the way to see the West. Designed by one of the most prolific Disney Imagineers of all time, Nature's Wonderland give Frontierland its own equivalent of the Jungle Cruise – a ride that toured guests through fantastic environments, comical encounters, and over 200 animals hidden throughout valleys, deserts, peaks, and caverns. Spread across seven acres, this sprawling complex gave guests a peek into the American Southwest and the wonders of nature that await there...

Closing long before ride coupons gave way to pay-one-price admission, the Mine Train Through Nature's Wonderland has been largely forgotten. But today, we'll ride through the history of Disneyland's "Living Desert" and the sights and sounds that awaited on the remote frontier before seeing how this concept almost evolved at Walt Disney World... and what happened instead. Hop in and remain seated as we head out into Nature's Wonderland...

Frontierland. It is here that we experience the story of our country's past. The color, romance and drama of frontier America as it developed from wilderness trails to roads, riverboats, railroads and civilization. A tribute to the faith, courage and ingenuity of our hearty pioneers who blaze the trails and made this progress possible.

When Disneyland opened in 1955, Walt's ode to the American West (and more to the point, to the fictionalized heroes and legends who inhabited it via mid-century American TV shows like his own Davy Crockett) was incarnate in Frontierland. In fact, by the end of its first year, five of Disneyland's highest-tier attractions departed from Frontierland. Two of them – the Mike Fink Keel Boats and Mark Twain Riverboat – encircled the Rivers of America. The other three – the Pack Mules, Conestoga Wagons, and Stagecoaches – left the comfort of the park behind and headed out into "the Painted Desert."

You have to imagine that for audiences of the 1950s – when families gathered around the brand new black-and-white television set to watch Davy Crockett and The Lone Ranger, "Howdy Doody" was an after-school delight, and playing "Cowboys & Indians" filled summer breaks – the real, visceral experiences of Frontierland were a joy. Where else could your family load into a Conestoga wagon bound for the Oregon Territory, or straddle a mule as it clipped and clopped through desert rock formations? In Frontierland, pop culture came to life, giving guests the chance to do something extraordinary.

In 1956, the "Painted Desert" underwent a major revitalization. With the addition of the Rainbow Caverns Mine Train, the sprawling property was redesignated Frontierland's "Living Desert."

Boarding from the Old West town of Rainbow Ridge, the clanging bell of the Mine Train signaled guests departure to the distant desert wilderness. The 2'6" gauge miniature railroad traveled along the Rivers of America, encircling the pouring waterfalls of Cascade Peak before pulling away from the shore and headling inland to the Living Desert itself.

There, the train would pass beneath precariously and comically teetering boulders and past cacti that sometimes looked almost humorously human. Along its course, the Mine Train would dart under, over, and alongside dirt paths traversed by stagecoach and wagon, with single file packs of mules marching in formation. The sprawling Living Desert – filling more than a tenth of Disneyland's initial 70-ish acres – was built on a scale few others could manage. With no less than four intertwining attractions each sharing its sights.

But only the Mine Train entered into the fabled Rainbow Caverns themselves: a short dark ride section passing through caves lit by colorful "paint pots," glowing geysers, and strange rock formations...

In 1960, a reimagining of the Living Desert saw the Rainbow Caverns Mine Train upgraded (and promoted to the most expensive and limited ride coupon: an "E-Ticket"). Though the Living Desert and Rainbow Caverns were maintained, the rest of the railroad's course would pass through new habitats populated by simple electro-mechanical wildlife figures (the first true Audio-Animatronics were still three years away) as part of the new Mine Train Through Nature's Wonderland.

Nature's Wonderland offered to be a Jungle Cruise of the American Southwest; an informative journey through real environments passed through Disney's lens of fantasty, and populated by showstopping "wildlife" figures that would delight audiences.

There was just one problem: Walt himself apparently didn't think the ride was quite where it ought to be... Though the scenery was beautiful and the few animal figurines were realistic, the Rainbow Caverns Mine Train bordered on boring. And Walt had just the person to transform this leisurely train ride into a true E-Ticket to stand alongside the Jungle Cruise.

To help, Walt called over to the Studio and to one of his most accomplished animators: Marc Davis, one of the core "Nine Old Men." Having served as the lead designer and animator of the title character from Snow White and the Seven Dwarfs (1937), Mr. Toad and “The Wind in the Willows” cast of The Adventures of Ichabod and Mr. Toad (1949), Cinderella herself (1950), Alice from Alice in Wonderland (1951), Peter Pan’s Tinkerbell (1953), Sleeping Beauty’s Aurora and Maleficent (1959), and Cruella de Vil from 101 Dalmatians (1961), Marc had just the bona fides to add a little character and comedy to Disneyland's rides.

Walt asked Marc to bring his character eye and penchant for perfectly staged animated scenes to Disneyland, and particularly to take a “good, hard, critical look” at the Rainbow Caverns Mine Train. “There was an awful lot of things wrong,” Imagineering Disney reports Davis saying. “They had no gags in it; no story at all… One kit fox’s head is going up and down, then about a hundred feet away another kit fox’s head is going left to right, so I took the two, put them nose to nose, so one is going up and down, the other moves side to side, so immediately you have humor!”

An "outsider" from animation called into critique Imagineers' pet projects, Davis initially made few friends at WED Enterprises. However, few could argue with the results: Davis' undeniable knack for comedy, staging, and just the right amount of comic exaggeration and personification saw Mine Train Through Nature's Wonderland reborn with new life and joy. All said and done, over 200 figures were constructed for the final version of the ride, many based on Marc's design or staging.

(He'd be tasked with applying the same lens to the Jungle Cruise, adding humorous and perfectly-staged scenes like the "Trapped Safari" and "Elephant Bathing Pool" soon after. Then, he'd go on to design characters for the Modern Marvel: The Enchanted Tiki Room, then spearhead the lighthearted, character-filled, singalong second halves of both Pirates of the Caribbean and the Haunted Mansion.)

On the next page, we'll take a ride through Nature's Wonderland that have been lost to time...