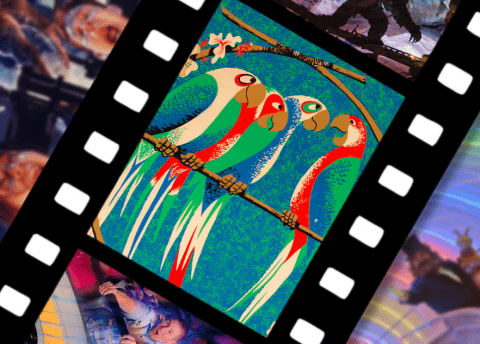 Jungle Cruise marks the eleventh film based on a Disney theme park attraction counting the Pirates sequels, seventh without. It’s a distinct course-correction from the last attempt at an E-ticket franchise with 2015’s Tomorrowland. Instead of the esoteric if ultimately uneven sci-fi sprawl, Cruise opts to play the hits, borrowing gags wholesale from The Mummy, Romancing the Stone, and various Indiana Joneses. Despite the original boat ride being famously inspired by The African Queen, the film takes its biggest cues from Pirates of the Caribbean: The Curse of the Black Pearl.

The trailers do an admirable job of hiding just what it takes from the gold standard of theme park adaptation, but the surprise is disheartening to say the least. The last Pirates film released just four years ago and similarly went back to the same well. Given the dueling reboots of that franchise currently in development, it’s a worrying sign of creative ouroboros - more and more recycling, faster and faster. But if E-ticket franchises are here to stay and coming, well, faster and faster, there’s no shortage of fresh directions and farflung genres to choose from.

It’s a blank canvas. The attraction has as much narrative as a Greyhound station. The atmospheric, arguably ominous score along its seemingly endless corridors is glorified elevator music. A great deal of artistry and engineering went into making the mundane fantastic and an oddly shaped warehouse into an interstellar airport, but the beauty of Space Mountain is that it’s a setting, not a story.

Starport Seven-Five is “Your Gateway to the Galaxy.” The story only begins when the riders sit down and it leaves with them when the lapbar pops up again. What the average guests remember and the truly faithful savor are textures, sounds, fleeting moments in the dark. “Star Tunnel,” one of the most beloved sonic welcome mats in Walt Disney World, is sparse and existential. It doesn’t sound like the countdown to a launch, but the unwary first steps of earthlings off-world. Even the post-show scenes, offering Horizons-adjacent windows into the surrounding future, color only outside the lines. Everything within the Mountain is fair game for creative license.

In what will soon become a pattern of the list, the attraction was already adapted once as a comic. The 2014 graphic novel, written by Bryan Q. Miller and illustrated by Kelley Jones, takes the space station concept and ties it in kid-friendly knots involving time travel and more than a few Tomorrowland references. Though the rest of the intended trilogy was never published, this standalone story endures as evidence of the attraction’s versatility.

And all this is to say nothing of Disneyland Paris’s steampunk peak, once explicitly based on the work of Jules Verne and, by extension, George Méliès’s groundbreaking 1902 film, A Trip to the Moon.

The Journey Into Imagination comics, named Figment after the plush-immortalized star, released the same year as the Space Mountain book, but made a bigger splash. The five-issue miniseries, written by Jim Zub and illustrated by Filipe Andrade, sold enough to warrant a sequel, Figment 2. It also sold well enough for fans to hope and assume that Disney might finally bring EPCOT Center’s oldest mascots back to the spotlight.

Delayed five months after the rest of the park due to faults with its turntable ride system, Journey Into Imagination opened to immediate relief. It would be years before the company allowed Mickey and friends to invade the newly built World’s Fair. For early guests, Figment and Dreamfinder were the only characters they could reach out and hug.

Disney artist Steve Kirk had been sketching a wily inventor and his pet dragon for a while. The Discoveryland plans fell through and they didn’t quite fit in The Land, but when famed designer Tony Baxter turned his attention to a pavilion dedicated entirely to imagination, the duo felt right at home. The inventor became Dreamfinder, an ambiguously Victorian scientist charged with collecting inspiration in his flying Dreamcatcher and turning it into creation, and the dragon became Figment, one of Dreamfinder’s ideas given literal wings. From there, riders explored the farthest reaches of art and science to see the imagination  process in astounding, expressionistic detail.

It was an odd exhibit out, among the rest of Future World’s subjects, but that was the point. There is no Land, no World of Motion, no Universe of Energy, and no Living Seas without an incendiary spark of imagination. A film adaptation, by extension, would be virtually boundless. Dreamfinder and his probably-CGI companion could go anywhere and do anything in search of that most precious resource. Although the attraction may be long gone and shows no sign of returning, the message at the end hasn’t aged a day - everybody’s creative, all it takes is the proper inspiration.

Last year, at a virtual celebration of Walt Disney’s birthday, the retired Baxter beat a drum for his beloved Journey. Short of consulting on a updated version of the ride, he proposed a movie of his own: “Maybe we can even do a film. That would be even better. A full-length animated feature film starring Figment. Let’s do a Kickstarter right now.” That’s already one guaranteed ticket.

This is a bit of a cheat.

Countdown to Extinction came late in the development of Animal Kingdom and only cemented its place in the opening day line-up thanks to corporate synergy. Walt Disney Feature Animation had been chipping away at a dinosaur project since the late 1980s. The central species of the film - Iguanodon and Carnotaurus - became the central species of the attraction. When the park opened in 1998, the animated feature was still a few years out so a direct tie-in wouldn’t have made much sense. In the meantime, the ride was known as Countdown to Extinction.

The plot is textbook theme park. Guests become unwitting volunteers for a closed-door test of completely experimental technology. The tech in this case is a time machine, aimed at the closing minutes of the Cretaceous period. All riders have to do is locate and, presumably, wrangle an Iguanodon aboard for the return trip. Things go wrong, as they are destined to, but everybody makes it to the gift shop in one piece, including the ornithopod.

When Dinosaur finally released in 2000, the attraction was subtly updated to match the title and tone. The scariest edges were sanded off. Instead of dodging an asteroid at the last possible second, the Time Rover vehicles dodged a final charge from now-overtly villainous Carnotaurus. The film, though financially successful, faded fast from the public consciousness. Odds are most Animal Kingdom visitors don’t even recognize the synergy anymore.

Which leaves plenty of room to run with the original Countdown to Extinction concept. Beyond the still-reigning Jurassic Park/World franchise, few blockbusters even attempt Dinosauria. Countdown not only sidesteps DNA as a plot device but colors prehistory in a much darker, much scarier light. The mood is literally apocalyptic, the time and place imagined as an endless dark populated by ten-ton beasts even more panicked than the time travelers.

It’s a different adventure 65 million years in the making and, as any survivor will tell you, well worth taking, even if its paradoxical source material has been lost to the fossil record.

All of the attraction films produced so far have been family friendly, but only The Country Bears and the made-for-TV Tower of Terror are rated G. The rest feature cannibals, zombies, and conquistadors with snakes falling out of their faces, respectively. It’s a surprising track record for a company that once upon a time refused to touch a PG. Of all the attractions currently standing, there’s no better candidate for an all-ages crowdpleaser than The Enchanted Tiki Room.

Animated birds were in vogue for a while. Happy Feet, Rio, Surf’s Up, Angry Birds. That’s not even counting the supporting characters in other animal-based movies. On one hand, saturation is saturation. On the other, Tiki Room is a one-of-a-kind opportunity to push the form to its limits.

Like Space Mountain, the attraction is more setting than story, but with a literally colorful cast of characters. The star crooners - José, Michael, Pierre, Fritz, Rosita - are just one act of many. Tiki carvings, flower buds, tropical gods, and a full bird chorus round out each performance. All the singers share the house-style look of early Disney animatronics, but any attempt to render them as-is in 3D is missing the point.

Every piece of art produced for and around the Tiki Room captures the show’s easy-does-it charm in a completely different way. Marc Davis sketched the totems as caricatured warnings, all shocked eyes and sharp teeth. Herb Ryman painted the thatch-roofed exterior as a postcard port-of-call. John Hench rendered the interior as a dreamy watercolor dive, the mood interrupted only by wispy shocks of feather above. On Paul Harley’s attraction poster, the birds are reduced to their most basic shapes and speckled to picture-book perfection. On James Jebavy’s promotional painting for United Air Lines, José perches alone as a scraggly mosaic of stained-glass shades.

The birds have already starred in their own five-issue miniseries, written by Jon Adams and illustrated by Horacio Domingues, and Jason Lethcoe’s Tales from Adventureland books, but they belong in motion. There’s no wrong way to depict the world of The Enchanted Tiki Room but, given the near-endless resources and near-limitless capabilities of modern animation, there’s no reason to expect anything less than an audio-visual sensation.