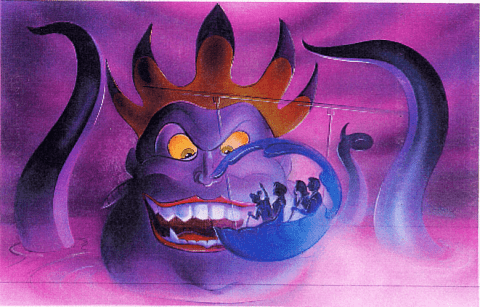 “Good ideas never die at Imagineering.” That may be true… but it doesn’t mean some aren’t buried deep in the archives... But as movies and television shows unleash a multiverse of alternate realities and unusual potentialities into the mainstream, it’s worth asking those two words Imagineers love: “What if?”

Today, we’re taking a whirlwind tour of 9 Disney “classics” that almost looked a whole lot different from the rides we know and love today. These nine attractions started out their development in a whole different form before evolving for the better… or sometimes, worse. Take a look through these archived alternatives and try to imagine how they might have changed the parks forever if they had come to be...

In 1963, a stately white plantation house appeared on the banks of Disneyland’s Rivers of America, in what would soon become New Orleans Square. But what was inside the house? No one knew… including Walt Disney! At the time, concepts for the Mansion mostly revolved around a guided, walkthrough experience where groups of guests would be toured from room to room by a grim butler or maid.

During their visit, guests would learn the somber and spooky “history” of the home and its hauntings. Many legendary Disney designers offered up potential plots for the home, like a family cursed with bad luck, a piratical sea captain with a dark secret, or a “Museum of the Weird” containing otherworldly objects and paranormal relics. Each room would unravel the story further, culminating in a special effect or surprise, scaring guests onward to the next chamber.

But the 1964 - 65 New York World’s Fair and 1967’s New Tomorrowland moved the Haunted Mansion to Imagineering’s back-burner. When Walt Disney died in December 1966, he still hadn’t firmly decided what should go into the big, empty house. Ultimately, the marvelous Omnimover ride system designed for Tomorrowland’s Lost Legend: Adventure Thru Inner Space provided a high-capacity solution that a walkthrough couldn’t, but in an alternate universe, guests still touring the Haunted Mansion room-by-room as otherworldly special effects unfurl around them…

2. Tower of Terror… with a serial killer?

The road to the Tower of Terror is a long one, and we’re not just talking about Sunset Blvd. Our friends at Park Lore dove into the full story of the ride's development, but here’s the strangest part: once designers settled on building a drop ride at the Disney-MGM Studios, the very first concepts placed the ride in the ruins of an old Hollywood hotel. Similarities to the ride we know today, though, pretty much end there.

First of all, this ride would’ve used Intamin’s first-generation Freefall ride technology – essentially, carts of four guests would be lifted to the top of a tower, pushed forward to align with rails on the tower’s frame, then released to slide down the tower, curving out at the bottom to end on their backs. Pretty rudimentary by today’s standards. But even weirder, the ride’s first storyline saw guests terrorized by a serial killer who’d set up camp in the abandoned hotel!

Seriously… the original concept allegedly revolved around a silent film director who’d gone mad when the advent of sound pictures made his artform obsolete. Evidence of the killer stalking guests through the queue would culminate when – at the top of the tower – lightning flashes would reveal the killer atop the elevator shaft, scissors in hand. With a maniacal laugh, the madman would snip the cable, sending guests plummeting. Ultimately, The Twilight Zone served as the perfect homage to American television and to the eerie sci-fi horror genre, but in some alternate universe, this rickey ole’ Tower is leaving guests screaming just the same.

Just like its fellow New Orleans Square project, the Haunted Mansion, Disneyland’s Pirates attraction went through quite a few design iterations. The most well-documented, though, is its time in production as a wax museum.

The “basements” of New Orleans Square were initially dug out to house that version of the attraction, which would’ve allowed guests to freely tour through an indoor Caribbean village and docked pirate vessel under permanent night skies. Disney Legend Marc Davis was asked to take a look at the concept, reforming it into a more structured, interactive walkthrough so that guests would pass through six staged scenes telling a historic story.

Why didn’t it happen? Like with Haunted Mansion, Walt and company were called away to the 1964-65 New York World’s Fair, where capacity was key. Playing with “company money” thanks to deep-pocketed sponsors, WED used the fair to develop three of Disney’s highest capacity ride systems, including the extremely efficient flume system powering “it’s a small world.” The Pirates of the Caribbean ride we know today benefits from that innovation, and since it was the last ride overseen by Walt (he died just three months before its debut), we can be sure that the boat ride is exactly as he wanted it.

Have you ever noticed that even though the 1990s’ Disney Renaissance remains the most celebrated period in the company’s animation history, very few of its generation-defining hit films have become rides? After the runaway success of 1989’s The Little Mermaid, plans began to take shape for how the ride could come to Disney Parks.

The ride Imagineers created was a suspended dark ride (like Peter Park’s Flight). But rather than taking to the skies, the ride system would be reused to take the seas. The conch shell vehicles would appear to float when departing the station, but then dive beneath the “water” to begin an Under the Sea singalong. We know exactly what this ride would’ve entailed because a full-length computer rendering of it was created for Platinum Edition DVD of The Little Mermaid released in 2006 (below)!

Why didn’t it happen? Suffice it to say that this Little Mermaid ride was planned to make its worldwide debut at… Disneyland Paris. Trouble is, when the French park opened in 1992, it was a financial failure, obliterating plans to expand the park – and in fact, dooming a decade worth of would-be projects across the entire Parks division. In 2011, a Little Mermaid dark ride finally debuted at Disney California Adventure (set in a turn-of-the-century aquarium on the park’s Paradise Bay). It’s got a lot in common with the ‘90s concept, but uses the grounded Omnimover ride system.

In the 1980s, Michael Eisner stepped in as CEO of Walt Disney Productions with a heavy-handed mission: to make Disney Parks relevant. As part of that goal, Eisner was willing to reach beyond Disney’s catalogue of characters – whatever it took to stock the park with the stories people cared about! The “Ride the Movies” era of Disney Parks history is an epic one, including the stories of what almost got built.

Connecting with filmmaker George Lucas, Imagineers were encouraged to think big about how the generation-defining Star Wars universe could fit into Disney Parks. One concept saw Disneyland’s Tomorrowland entirely reimagined as a departure point for “LucasPort,” a glass and steel complex filled with sci-fi adventures. The land’s anchor attraction allegedly would’ve been an enclosed dark ride / roller coaster where – at key points during the attraction – the ride would pause to view a scene, giving guests an in-vehicle choice between a “light side” and “dark side” response. The train’s vote would then shift a track section, altering the course forward. This “choose-your-own-adventure” roller coaster would’ve been one-of-a-kind… it also would’ve been absolutely gigantic, requiring incredible space to house branching coaster tracks.

Michael Eisner reportedly loved the idea… but was allegedly aghast to discover that such a massive concept would require years of concepting, engineering, demolition, and construction. Given how determined he was to start Disney Parks’ transformation, he tasked designers with coming up with something that would take up much less space and be able to come online in much less time. The result? The Lost Legend: STAR TOURS (which, in a roundabout way, finally got its own multiple paths in 2011.