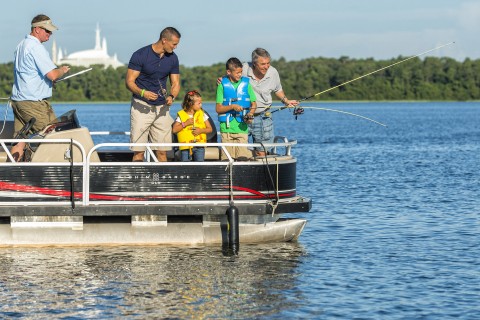 Walt Disney World is primarily known for its four iconic theme parks. However, visitors may not realize just how much there is to explore outside of the parks.

Walt Disney World was built to be an all-encompassing destination—that you really could spend an entire week there without leaving Disney property. Whether you choose to spend a day or two of your vacation away from the parks or just cap off some of your park days with extra recreation, there really is something for everyone at Walt Disney World beyond the parks.

Part of the fun of visiting Walt Disney World is the joy of exploring, and much of that exploration can be found outside of the parks. We do want to raise one important disclaimer before we proceed, however—pandemic closures hit Disney’s out-of-park experiences particularly hard. While more and more Disney experiences continue reopening, a significant number of the resort’s out-of-park experiences are still affected by closures. Despite this, we included many of these in our guide since policies are changing regularly and experiences continue to return.

This guide is sixth in a series here at Theme Park Tourist to fulfill that need—sharing the basics to make the most of a Walt Disney World vacation. Our goal is to prepare you for what to expect, as well as help you avoid the snags that spoil too many potentially great vacations.

In our first installment, we focused on what you need to know about Walt Disney World overall—give that piece a read if you haven’t yet as it covers the “big picture” facts about visiting The Most Magical Place on Earth. Since then, we’ve taken a look at all four Disney parks in depth: Magic Kingdom, Disney’s Hollywood Studios, Epcot, and most recently, Disney’s Animal Kingdom.

So what exactly is there to do at Walt Disney World outside of the parks?...

Walt Disney World is home to two incredible water parks: Typhoon Lagoon and Blizzard Beach. Both are excellent parks with impressive theming and a similar number of attractions.

Currently, Blizzard Beach is the only Disney water park open. Themed after an ill-fated ski-resort that melted, it’s arguably the more kid-friendly of the two (with the exception of its stunningly-terrifying flagship slide, Summit Plummet—the third tallest and fastest speed slide in the world). It has an excellent array of slides and attractions, along with a bobbing style wave pool and an over-the-water obstacle course specifically with pre-teens in mind.

Typhoon Lagoon is themed after an island that was transformed after being hit by a typhoon—it may feel a little more familiar in setting as far as water parks go. Along with an excellent lazy river and good range of slides, the park is particularly known for its incredible wave pool, which regularly blasts guests with waves so strong you can actually surf them (an activity sometimes available as a special experience outside of park hours).  If Summit Plummet is a little too-much speed, Typhoon Lagoon offers Humunga Kowabunga, its own smaller speed slide, as an alternative.

Both parks have their strengths and are enjoyable for all ages—the closure of one for a season isn’t anything new, despite pandemic shifts. Most of the time, the parks operate on a seasonal schedule, with Blizzard Beach open early in the year, Typhoon Lagoon later in the year, and both operating during the summer. We aren’t sure if Disney will return to this staggered after 2021, but it is a possibility.

Walt Disney World’s expansive shopping and entertainment district has been known by many names over the years—the latest of which is Disney Springs.

Disney Springs covers over 120 acres and includes over 150 shops, restaurants, and other venues. Whereas the district once mostly featured Disney-centric shops, it now includes a whopping selection of popular retailers, including some you won’t find anywhere else in the region like Uniqlo. We’ve used the phrase “something for everybody” a lot when it comes to Walt Disney World, but this especially applies to Disney Springs: you may stroll past high-fashion venues like Na Hoku Jewelers, Anthropologie, and MAC cosmetics one minute, then find yourself perusing the World of Disney (Disney’s largest store on the planet) or Amorette’s Patisserie the next. Fans of Star Wars, Marvel, Lego, and more will find plenty to explore throughout the district.

Do note that Disney Springs is extremely popular both with locals and visitors. Expect heavier crowds on weekends, in the evenings, and especially around major holidays.

Disney Springs isn’t Disney’s only entertainment district. It has a smaller cousin situated snugly next to the Epcot resort hotels: Disney’s Boardwalk.

The Boardwalk offers a different sort of draw than Disney Springs—it’s a fantastic place for a leisurely stroll or to catch a meal. Currently, Trattoria al Forno and Big River Grille are the primary dining options available, but we are eager to see the return of The Flying Fish, arguably one of the best restaurants on property, as well as the ESPN Club. For a more casual stop, pick up some ice cream or a pastry at Boardwalk Bakery or Boardwalk Ice Cream. Guests can also enjoy some fun diversion via fairway style games, surrey bike rentals, or casual shopping.