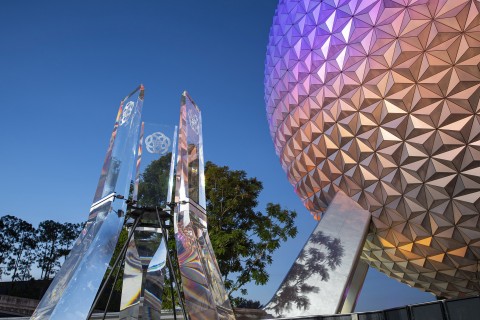 Epcot is Walt Disney World’s most delightful oddball of a park.

People have had trouble categorizing Epcot since its opening—it has never followed traditional theme park rules. Instead of emphasizing rides and characters the way Magic Kingdom does, Epcot is best described as a celebration of the world as it could be. It is likely the only theme park in the world that started out as a premise for a prototype utopia.

Epcot was Walt Disney’s greatest dream—the vast majority of the passion and focus for his “Florida Project” surrounded his Experimental Prototype Community of Tomorrow (E.P.C.O.T.). His goal was to create an actual prototype city where people lived and worked in the midst of cutting edge technology and where the nations of the world were represented in harmony. Walt was so determined to bring Epcot to life, he only agreed to build the Magic Kingdom as a means to fund it.

Alas, Walt passed away before Walt Disney World was completed, and his successors made the (wise) choice to adapt the Epcot concept into a theme park like no other: a celebration of the human experience where wonder abounds and learning is fun.

The Epcot of yesteryear is currently in a process of transformation—along with the addition of new attractions like Remy’s Ratatouille Adventure (opening in 2021) and Guardians of the Galaxy: Cosmic Rewind (opening in 2022), the park is undergoing a significant reimagining to make way for new guest experiences. Still, the spirit of Epcot has remained the same: a singular destination celebrating discovery, diversity, innovation, and nature.

This guide is fourth in a series here at Theme Park Tourist to fulfill that need—sharing the basics you need to know to make the most of a Walt Disney World vacation. Our goal is to prepare you for what to expect, as well as help you avoid the snags that spoil too many potentially great vacations.

In our first installment, we focused on what you need to know about Walt Disney World overall—give that piece a read if you haven’t yet, as it covers the “big picture” facts about visiting The Most Magical Place on Earth. Since then, we’ve taken a look at both Disney’s Magic Kingdom as well as Disney’s Hollywood Studios (home of Star Wars: Galaxy’s Edge).

Today, we’ll be zeroing in on the top 10 things you NEED to know before visiting Disney’s Epcot.

1. It is completely unique among theme parks

We touched on this in our introduction, but Epcot is a tricky park for some Disney guests to wrap their heads around because it’s just so different.

No other park has ever done what Epcot did—instead of a collection of rides and amusements, it’s a celebration of the human experience. While Epcot is starting to see a few more attractions arrive with focus on popular intellectual properties like Frozen or Ratatouille, the park has long focused on broader subjects: things like the history of communication, the spirit of discovery, diversity of cultures, or the sparks of imagination. Even the park’s layout plays by different rules, split into two distinct parts: Future World and World Showcase.

Epcot is such a singular place that it has, on occasion, been written off as Disney’s “boring” park. Families with children sometimes consider skipping it for fear it will be too adult-centric for little ones to enjoy. In truth, Epcot has always held appeal for all ages, and that holds even more true today with the addition of new attractions and experiences with elements just for kids. Some of the top highlights for kids include The Seas With Nemo and Friends, Frozen Ever After, and Journey Into Imagination.

2. The experience is about more than just rides

This is a common theme across much of Walt Disney World—a trip to Epcot is about much more than rides.

Similar to Disney’s Animal Kingdom or Star Wars: Galaxy’s Edge, Epcot is a multi-layered experience. The park has some great rides (Soarin’, Test Track, and Frozen Ever After tend to be the most popular), but you may find yourself drifting into a slower pace as you take it all in and realize the park itself is an expansive attraction.

Epcot is a place that encourages free-exploration. You can drift at your own pace through the pavilions of World Showcase, lingering to enjoy art, lavish gardens, restaurants, shops, or character encounters. You can tour the park’s seasonal festivals, trying unique culinary delights from around the world and taking part in activities encouraging guest expression. You can enjoy thrills on Mission: SPACE Orange Team one minute, then take a relaxing tour through the history of communication inside Spaceship Earth the next. With the exception of Test Track, Mission: SPACE Orange Team, and the upcoming Guardians of the Galaxy coaster, most of Epcot’s rides tend to air on the more serene side.

The best part of Epcot, perhaps, is that it’s a place with lots of options to make the experience fully your own—the park offers a delightful variety for guests of every age and temperament.