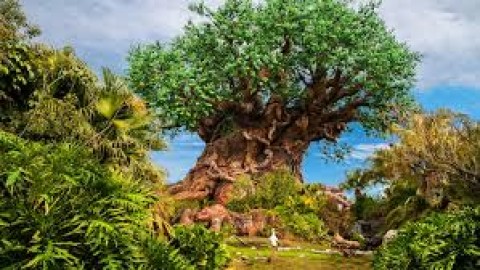 In his original dream for Disneyland, Walt Disney wanted guests to have the opportunity to get up close to animals in an immersive setting—not a simple zoo but a surreal overlap between the real world and the animal kingdom. Unfortunately, animals were deemed too unpredictable, and the concept was converted into the Jungle Cruise instead. After Walt’s death, Disney took another crack at the idea after the opening of Walt Disney World with a small island animal preserve called Discovery Island, but this still didn’t fully fulfill the dream.

Disney’s Animal Kingdom opened on Earth Day in 1998, described by CEO Michael Eisner as, “A kingdom of animals... real, ancient, and imagined: a kingdom ruled by lions, dinosaurs, and dragons; a kingdom of balance, harmony, and survival; a kingdom we enter to share in the wonder, gaze at the beauty, thrill at the drama, and learn.”

Disney’s Animal Kingdom is, in many ways, the gem of Walt Disney World—a place where guests can scale the peaks of the Himalayas, return to the era of the dinosaurs, soar on a banshee, and encounter some of the most beautiful animals on our planet up close. It’s one of Disney’s finest achievements interweaving the majesty of the natural world with the wonder of the fantastical.

This guide is fifth in a series here at Theme Park Tourist to fulfill that need—sharing the basics to make the most of a Walt Disney World vacation. Our goal is to prepare you for what to expect, as well as help you avoid the snags that spoil too many potentially great vacations.

In our first installment, we focused on what you need to know about Walt Disney World overall—give that piece a read if you haven’t yet, as it covers the “big picture” facts about visiting The Most Magical Place on Earth. Since then, we’ve taken a look at Disney’s Magic Kingdom, Disney’s Hollywood Studios, and most recently, Epcot.

Today, we’ll be zeroing in on the top 10 things you NEED to know before visiting Disney’s Animal Kingdom.

When Disney Imagineers (largely spearheaded by legend, Joe Rodhe) conceived Disney’s Animal Kingdom, they didn’t want guests to interact with animals through cages. Disney wanted to design a place that felt so realistic that both the guests and the animals would feel like they’d entered a natural habitat.

The centerpiece of Disney’s Animal Kingdom is the park’s 100 acre African savannah—primarily enjoyed through tours on the Kilimanjaro Safaris attraction. This massive space was designed so guests almost never see the barriers that keep both animals and guests safe, utilizing a mix of illusions and natural methods to conceal the boundaries around animal exhibits. They also employed a number of clever tricks to ensure guests have the best chance possible to see animals (such as providing air conditioning on the rocks preferred by the lions or placing salt licks in strategic locations for other animals to enjoy).

The result is both that the animals are able to enjoy an expansive amount of space, and the park doesn’t have the same artificial feel as a zoo. This philosophy carries over to the park’s incredible walking paths and other areas.

Disney’s Animal Kingdom also plays an active role in conservation programs, scientific studies, and in ensuring wildlife throughout Walt Disney World receive veterinary care when needed (we once saw a duck get a thorn removed from his foot at the Conservation Station, complete with the application of a little custom-made duck bandage).

Aside from the major role played by animals, Disney’s Animal Kingdom is also home to some of the resort’s best rides and one of its most immersive lands, The World of Pandora. The end result is a park that seamlessly integrates Disney magic with a celebration of nature.

The seamless nature of Disney’s Animal Kingdom is one of the reasons it remains a favorite for many guests. I’ve even known many people who didn’t care for Walt Disney World who loved their visit to the park.

Disney’s Animal Kingdom is one beautiful park—everywhere you look, the eye is dazzled in new ways. Disney’s Animal Kingdom also arguably appeals to the widest range of guests of any Disney park. It’s not just a destination for the old or the young, for Star Wars fans or Disney purists—there’s literally something for everyone.

Thrill seekers can enjoy a high-speed roller coaster on Expedition: Everest or race against time on Dinosaur. Seekers of wonder can experience the awe of flight on Avatar: Flight of Passage. Guests who prefer a slower paced experience can tour the park’s incredible walking paths. Families with kids will find character encounters, Wilderness Explorer scavenger hunts, and sections fully dedicated to the littlest adventurers. There’s even an attraction for people who really, really like bugs (I am not one of these people but more power to you!).

3. It’s sort of a cousin to World Showcase at Epcot

Fans of Epcot may particularly enjoy Disney’s Animal Kingdom for a specific reason—it’s something of a spiritual cousin to World Showcase.

For decades, fans have waited for Disney to add new pavilions to Epcot’s World Showcase. While the park does currently feature two pavilions from Asia (China and Japan) and one from Africa (Morocco), no development ever came about adding any other African or Asian countries.

Africa and Asia make up the two largest lands at Disney’s Animal Kingdom, and they just might be two of the loveliest lands Disney has ever made. Rather than focus on specific African or South Asian countries, Disney intermixed the fantastic to give guests a wider view of stepping into these two incredible continents.

Disney’s Africa invites guests to explore the fictional village of Harambe, calling to mind equatorial nations like Uganda and Kenya. Disney’s Asia welcomes guests to the mysterious kingdom of Anandapur, a fictional nation positioned near Nepal, Bhutan, and northeast India. Both lands are strikingly detailed with attractions, restaurants, and shops themed after their namesake countries.