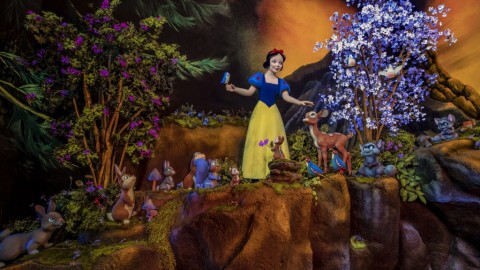 The gloomy mists of the Wicked Woods have evaporated, revealing a glittering, enchanted forest of fairytale creatures beneath. More than a year after its intended debut, Disneyland has finally opened its “not-so-scary” reimagining of Snow White’s Scary Adventures. What kinds of narrative and technological upgrades have gone into Snow White’s Enchanted Wish? Today we'll step into the now-definitive retelling of Disney's first animated feature to see if it's "happily ever after" after all... Do you wish Magic Kingdom's Snow White ride was still around to get this reimagining itself?

Our "Once upon a time" needs to start with some context. For most Millennials, Snow White's Scary Adventures was a trial of childhood, leaving lots of faces buried into parents' shoulders. In Disneyland's version of the ride, guests stepped into a grim, color-drained castle and queued alongside vignettes of eerie dungeons. Once on board, one of the more noteworthy aspects of the long-running Snow White ride was just how infrequently Snow White appeared... just once! After an opening scene in the Dwarves cottage, the ride quickly descended into darkness, sending guests through a deserted mine, then into the Queen's castle.... Startling transformations, skeletal dungeons, evil spells, jump-scares, snagging trees, red-eyed bats, the Witch offering her poisoned apple to you... Not even the ride's finale offered a reprieve, with storm-tossed Dwarves racing up a rocky cliff as the Witch pries a boulder off an outcropping and onto you.

The end. No Snow White. No "true love's kiss." No reawakening. Barely a "happily ever after." We detailed the complete history of both Magic Kingdom and Disneyland's Snow White dark rides in a standalone Lost Legend: Snow White's Scary Adventures feature. Relive the details there, or at least review the ride as it existed from 1983 to 2020, here:

Let's face it: Snow White is a pretty scary story. Dark rides are kind of inherently scary, too. Fittingly, its ride adaptation emphasized the spookier, gloomier, and more startling aspects of the film, delivering on Walt Disney's own intuitive understanding that children like to be scared; that the "delicious goosebump" is a formative feeling.

There's nothing wrong with frights, as the many around Disney Parks will show you... but there was an issue with Snow White's Scary Adventures. Perhaps because it was a "growth chart experience," attempted once – and just once – per visit, the Disneyland ride rarely surpassed a 10 minute wait, even as other Fantasyland favorites had queues spilling into the park. And as the only ride in Fantasyland dedicated to the popular and high-earning Disney Princess, the experience seemed out of sync with its built-in audience: youngsters leaving the Bibbidi-Bobbidi Boutique next door.

In November 2019, the Disney Parks Blog broke the story that "new magic" was coming to Snow White's Scary Adventures. In addition to the now-standard upgrades gifted to Alice in Wonderland and Peter Pan's Flight (like improved lighting, sound, and projection mapping), guests aboard Snow White's ride would "discover enhanced story details and all-new scenes." Fans pretty quickly recognized the new "Happily Ever After" vignette (above) as grafting easily onto the rocky, stormy cliffs of the sudden and inexplicable finale.

Delayed due to the COVID-19 pandemic that left Disneyland closed for well over a year, work on the refreshed and reimagined ride nonetheless continued... and when Disneyland re-opened on April 30, 2021, Snow White's Scary Adventures no longer part of its ride lineup. Instead...

Where once the Germanic castle on the west side of Fantasyland's inner courtyard had been imposing, cold, and gray, now it's gotten a pop of color. Bathed in warmer tones including pinks and yellows (but still presided over by the Evil Queen gazing out from red velvet curtains in the main tower above), it's clear that whatever's happening within is at least a little less scary. Rather than dungeons, the queue now passes mini-vignettes of Snow White's chambers, where she and visiting songbirds have made the most of her squallid conditions.

On board, what's perhaps most surprising is how relatively little has actually changed. That's a great thing! Guests enter the Dwarves' cottage, same as before, but now Snow White's formerly-only appearance (as a mannequin climbing the stairs) has been replaced with a dancing figure that spins alongside the musical Dwarves. It's charming and kinetic, but also so simple and classic that it's almost hard to imagine it wasn't always Snow White's introduction! (It also smells like fresh-baked pies... Who doesn't want that?)

Exiting the cottage out the back, the Queen is still there... but rather than entering an empty mine, we instead pass real, embedded footage from the 1937 film as we enter the mine, where Dopey and Doc are brought to life via robotic figures (again, smartly classic rather than the advanced figures from Seven Dwarfs Mine Train) while new projection, light, and sound works wonders to bring the musical mine to life.

Next, guests ride into the Queen's castle just as before, still featuring that clever mirror transformation effect, then continue into the castle dungeons. There, skeletons have been replaced with effortless projection-mapped moments, up to and including the poisoning of the apple (now with incredible projection emphasis). That means that the heart of Snow White's "scary" adventures is still in tact! It's only really the final run – zig-zagging through the Wicked Woods and the stormy cliff scene – where things have changed substantially.

Where once the Wicked Witch "jump-scared" guests by appearing from a rowboat, the Magic Mirror now shows us secondhand Snow White's bite into the apple. Then, we're off on a breakneck race through the story. A (merely relocated and restaged) scene still shows the Dwarves racing up a rocky cliff after the Witch. But the Wicked Woods have indeed given way to a forest with Snow White's glass coffin at the far end. As guests approach, the Prince leans in for his kiss, with waves of magic and light cascading through the forest in a spectacular effect.

Sparkling lights follow guests through the woods and toward the Dwarves cottage (where once the penultime Witch jump scare hid), now holding aloft a giant book that springs to life with the end of Snow White's tale as "Someday My Prince Will Come (Reprise)" plays. And indeed, 'round the corner, we get the "happily ever after" missing since 1955, as blacklight gives way to incandescent: Snow White saying goodbye to her forest friends as the proud Prince awaits her. Here's ride-through look at the "new" Snow White's Enchanted Wish. Notice not just what changed, but what hasn't:

Is Snow White's Enchanted Wish less scary than its predecessor? Inarguably, yes. But that doesn't mean it shies away from startling moments with the Witch. In fact, the ride is also the most well-balanced retelling of the story yet! Pretty unanimously praised by fans, the work that Imagineer Kim Irvine and her team pulled off in a pandemic has indeed given new life to a Fantasyland classic. Somehow, in the very limited space afforded by Disneyland's classic dark rides, they've told a more complete tale... and an inviting, inclusive, and exciting one. At least for now, its wait time often exceeds Peter Pan's....!

In fact, about the only disappointing thing about the Snow White's Enchanted Wish reimagining is that Magic Kingdom's version of the ride isn't around to get the same reinvestment.

Could Disney's Multiverse Craze Solve the Biggest Problems for Marvel and Star Wars in their Parks?