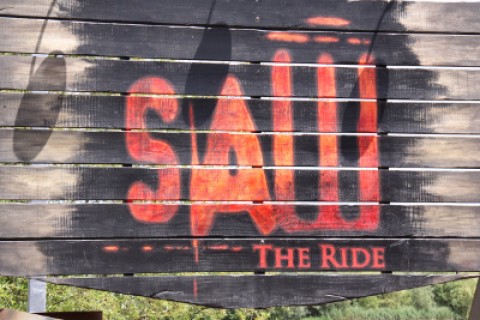 In many ways, the theme park has become a second home for the horror genre - a place where you can face your favorite scary movie (or show) from a place of safety, not unlike the movie theater. Thorpe Park’s Saw – The Ride is a torture device in its own right: guests are forced through crime scenes and a museum of grizzly traps before boarding a roller coaster that includes a 100ft vertical drop. And The Walking Dead – The Ride sees ‘survivors’ locating a safety bunker during a Walker attack and a ride that plunges them deeper into the world of the undead. The park also hosts annual 'FRIGHT NIGHTS', so horror franchise-themed experiences aren’t just limited to Saw and The Walking Dead. But what other permanent ones might fit in alongside these attractions?

1. A Nightmare On Elm Street

Saw has spawned several sequels since 2004, but what other sequel-spewing horror series could work in Thorpe Park? Look no further than A Nightmare on Elm Street. The franchise has enjoyed its own horror maze during Universal Studios’ Halloween Horror Nights, but for Thorpe Park we think a roller coaster attraction would be perfect. Prior to boarding a ride that boasts pyrotechnics and giant razor-gloved hands, guests would explore a boiler room-style walk-through that slowly transforms into the surreal landscape of the dreamworld, all to the sound of metallic screeches, cackles and “Freddy’s Coming For You”. Sounds like a dream for Freddy fans… Or a nightmare. One thing’s for sure, though – you’ll probably never sleep again.

The Shining has also had its own maze at Universal Studios’ Halloween Horror Nights, however, sci-fi blockbuster Ready Player One sees its characters explore a terrifying virtual rendition of the Overlook Hotel, so a VR-based nightmare would easily be the most fear-inducing. VR goes hand in hand with horror, and Thorpe Park has already adopted such experiences in the form of Derren Brown’s Ghost Train: Rise of the Demon. Imagine traipsing those seemingly endless corridors or desperately navigating a frost-choked maze with an axe-wielding maniac in pursuit. Will Thorpe Park ever welcome The Shining as a guest? Given the film’s resurgence in popularity, owing thanks to its 2020 sequel Doctor Sleep, never say never. Not that its popularity has ever waned – it’s always been here, and it will be here forever, and ever, and ever…

Halloween is the most popular franchise on this list. The 2018 ‘deboot’ breathed new life into the series, with highly anticipated follow-ups Halloween Kills and Halloween Ends scheduled for 2021 and 2022. And we can’t think of a more suitable experience for Michael Myers than a permanent FRIGHT NIGHTS-esque fixture. You’d make your way through a Haddonfield-themed 'scare zone', taking lessons from Universal Studios' Halloween Horror Nights which have previously done the franchise incredible justice. Cue pumpkins, police officers, John Carpenter’s iconic theme and, of course, Dr Loomis, whose spine-chilling exposition would determine your path to safety. Forget “the night he came home”, what about the night he comes to Thorpe Park...?

The Descent is a tension-building horror in which a team of potholers become trapped in an uncharted cave system with nightmarish humanoid predators. While it already sounds like the name of a roller coaster with a terrifying drop, it's a concept that would be more suited to an indoor maze. Horror franchise-themed scare mazes previously seen at Thorpe Park have included The Walking Dead - Living Nightmare, Cabin in the Woods and Blair Witch. In this case, guests would don hard hats equipped with flashlights and discover other adventurers who have met grizzly fates deep in the earth’s natural catacombs. However, as the ‘crawlers’ rely entirely on hearing to hunt their prey, screaming wouldn’t really be an option.

Much like VR, escape rooms work best with horror and can be found in theme parks everywhere. Thorpe Park has previously hosted 'CONTAINMENT', a series of horror-themed escape rooms, but for something a little longer term and which celebrates an iconic horror franchise, why not a Scream-themed experience. This would see guests try to solve riddles through a mix of horror movie trivia and murder mystery, all the while the villainous Ghost Face makes calls into the room to tease clues. Scream has all the right ingredients, and with a fifth film in the works, there might be no better time for Thorpe Park to cash in on this hip slasher series.