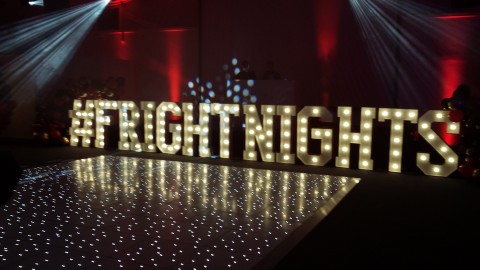 The song “Happy Birthday” isn't one you would normally associate with Halloween, but seeing as this year marks the 20th anniversary of Thorpe Park's annual 'Fright Nights', hearing said-song seasoned with a nightmarish twist seems about right. The night of October 6th was Thorpe Park's VIP preview of the Halloween-themed event, and to say the park put on one 'hell' of a party is a fitting summary - and we're here to bring you all the gory details.

SPOILER ALERT: This article contains in depth details and photos of this year's Fright Nights Event at Thorpe Park.

To no surprise, Fright Night is teeming with the undead – although strangely, despite the event having the same name as a cult classic ‘80s film, there were actually no vampires in sight. There were, however, plenty of other nightmarish nasties. From zombified soldiers to murderous clowns, monsters come in all shapes and sizes at Thorpe Park’s annual horror-thon. Whether it’s a scare zone, scare maze or one of the open rides such as Saw - The Ride, you’ll have to be on your guard as actors have well and truly perfected the artform.

As soon as you step onto the bridge after park check-in, you’re greeted by monstrous scarecrows who aren’t afraid to get up, close and personal. But this isn’t the last you’ll be seeing of them - they also appear outside the entrance to Colossus, and in The Crows, a spooky maze appropriately comprised of cornfields and haybales. When found in larger groups, they perform something of a scarily synchronised routine, giving you plenty of opportunities to whip out your camera (provided you’re happy to stay still while they loom closer with each step).

Meanwhile, over at The Swarm, whose surroundings have been suffocated in an eerie fog, you’ll encounter intimidating zombified police officers. If you thought Thorpe Park was strictly undead-themed, though, you’d be wrong. There’s an insane clown posse (pun very much intended) who look like they’ve taken fashion tips from the criminal inhabitants of Gotham City (specifically those who answer to the Joker and Harley Quinn), and many of them even wield baseball bats (which makes you question the real meaning behind the name of their show, 'Birthday Bash').

A family of blood-soaked hillbillies can also be found roaming around, courtesy of 'Creek Freaks Unchained'. And just when you thought Fright Nights had no more tricks up its sleeves, there are even werewolf high school students – cheerleaders and jocks, to be specific – who are partying against the backdrop of neon-lit school buses. These students attend Lycanthrope High, and the show they're putting on for their unsuspecting victims is 'Love Bites' - very appropriate. While there is something very Teen Wolf about this performance, these actors are perhaps the most intimidating of the bunch.

Overall, many of the actors have clearly gone method, and their ability not to break character is impressive. With that said, unless you scare easily, these ghost and ghouls are probably more likely to make you feel uncomfortable for all the wrong reasons. Screaming in your ear, interrogating you and engaging you in weird and wonderful conversations isn’t necessarily frightening – it’s just a bit awkward. Nevertheless, it’s fair to say these guys definitely don't have stage fright...