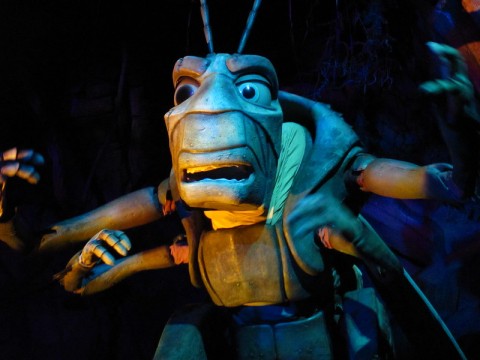 If you’re reading this, you probably love Disney parks. I do too… and it’s in that context that I feel the need to share an opinion that may or may not be popular with my fellow Disneyphiles.

It’s Tough to Be a Bug is just the worst…

I said it. I thought this was a controversial opinion, but I recently realized I’m not the only one who feels this way. Despite being a mainstay attraction at Disney’s Animal Kingdom since 1998 and even enjoying its own land at Disney’s California Adventure from 2001 to 2018, this 3D show takes the cake for pulling the boldest bait and switch from cute to skin-crawling terror of any Disney attraction ever. It holds a surprising number of similarities to Magic Kingdom’s much-maligned Stitch’s Great Escape without nearly as much negative publicity.

I want to preface this dive into the insanity which is It’s Tough to Be a Bug with a few things. First off, I’m not saying it’s the worst attraction of all time. I’m not even saying it’s a bad 3D show necessarily. If you love It’s Tough to Be a Bug, that’s all right. Some of the same moments we are about to call out might be what makes some guests love the show, and this is meant in good fun. Disney parks have different things that appeal to different people, and that’s part of what makes them great.

However, for those of us who hate this attraction with the passion of 1000 fire ants, here’s why… Spoilers impending!

It doesn’t take even two minutes for this ride to go from cute and cuddly to trying to take its audience out. I actually appreciate Chili the Chilean Rose Tarantula, as he does give the audience some foreshadowing what is to come. He seems like such a nice guy, a cute fuzzy spider with pretty colors who can do a neat trick—shooting spider quills at things.

Chili is the first of the bugs to almost take out some unsuspecting humans. There’s not really anything wrong with Chili’s quill-firing gimmick—it’s not that different from some of the zanier moments of Muppet Vision 3D or Honey, I Shrunk the Audience besides the looming sense of foreboding. Indeed, our sketchy encounter with spider quills is just the base of this cake of nightmares.

2. Prepare to be spat upon, interloper

The show keeps the cuteness coming with another adorable bug--a cute little termite! Awww, and he thinks he’s the Terminator… Oh, he can do a trick too! What a sweet little—

The Termite-ator proceeds to zealously spit in the face of every audience member his spray-hole can reach… with acid.

Back in the day, we expected this sort of thing on the Alien scene of The Great Movie Ride or on the ExtraTERRORestrial Alien Encounter (an attraction with a surprising amount of overlap with this one), but the effect is definitely unnerving. Most adults know that Disney isn’t going to actually blast audience members with burning acid, but this scene is where some kids start raising questions. How far is the Mouse willing to go to sell this effect? Is that water or lemon juice? Did some just get in my eyes? MOM, MY EYES ARE BURNING!!!

We went there—this is the only Disney attraction that literally farts in the face of its audience.

Yes, we know that the burping moment on Stitch’s Great Escape is nastier, but this is the point where the insults really start to compound on It’s Tough to Be a Bug. So far we’ve been shot at, spat upon, and now a Stinkbug has proceeded to unleash an olfactory assault into the enclosed space we’re trapped in—it’s like being back in middle school again. This moment can turn particularly unpleasant if a few audience members who’ve been holding one in decide to quietly add to the effusion when no one will notice…

The tone of It’s Tough to Be a Bug takes a sharp turn when Hopper shows up—he’s characteristically scary for a villain, but things get DARK quickly. If your child comes running to you when a spider the size of a grain of rice appears in their room, then this scene of It’s Tough to Be a Bug might terrify them on levels you wouldn’t expect at a Disney park. Even for adults, this scene is a test of fortitude.

Hopper’s Kubrickian supercut of giant bugs overrunning mankind is the only warning we get for just how bad things are about to go south.  In the matter of a minute, this attraction turns from A Bug’s Life to Apocalypse Now.

The termite acid and stinkbug fumes weren’t enough—we’re hit with chemical warfare right off the bat. Noxious haze fills the room as the lights go out.

We’ve been used for target practice, sprayed with termite juice, double-gassed, and our kids are now freaking out… then the buzzing starts. We’ve entered the territory of real life phobias. The sound is bad enough, but this is just a movie right? They wouldn’t—

BAM! Stabbed in the back… by Disney magic.

By the time the massive black widows appear from the ceiling, people are losing their cheese. I’m surprised this show doesn’t have higher instances of people fleeing the theater in hysterics. Watch the video above at about the 7:00 mark and listen to the intensity of the screams--we’re talking legitimate, shrieking dread. It’s a stunning amount of terror for a Disney attraction based on a really adorable kids movie.

The arrival of the chameleon is probably the best moment in the whole show. I love the chameleon—as far as I’m concerned, he’s the hero of Disney’s Animal Kingdom. The chameleon should have his own ride purely for ending the nightmare on a funny note that reminds us we’re still at Walt Disney World.

​​​​​​​It’s Tough to Be a Bug reverts back to cute-ville quicker than audiences can fathom what they just went through. They actually lay the cuddly shenanigans on so fast, the fact that we’re mesmerized by dancing poop-beetles no longer phases us. We’re ready to leave this den of madness… but It’s Tough to Be a Bug holds one final parting blow.

We were just trying to be polite and let the beetles leave first, right? After all, we just learned they keep us from getting buried in dung mountains? Why, Disney, why?! It’s Tough to Be a Bug feels like a complicated psychological experiment to see how close Disney imagineers could nudge audiences towards madness while still maintaining the guise of a squishy kids show...

...and that’s why for some of us, It’s Tough to Be a Bug is just the worst. If you love this attraction, more power to you—you’ve got nerves of steel, a great sense of humor, and the potential to be a brilliant entomologist. For the rest of us, we’ll stick to avoiding this particular hornet’s nest of controversial Disney magic.

Enjoy this article? Keep reading for a nostalgia dive into some of the Most Ridiculous (but Adorable) Things You Totally Did as a Disney Kid… or how Mickey & Minnie’s Runaway Railroad Won Over This Skeptical Writer.