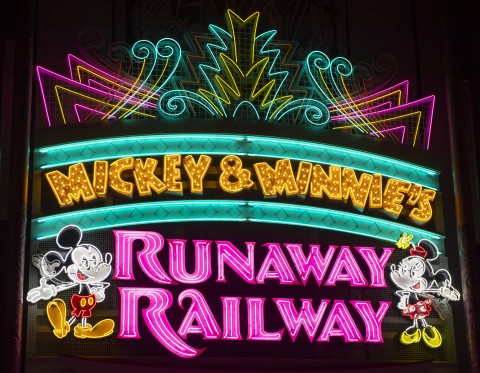 I’ve loved Walt Disney World for over thirty years, enjoying many adventures at the Most Magical Place on Earth from my early childhood to life as an adult writing about Disney parks.  Despite the special place in my heart for Disney, I have to confess a personal flaw that’s developed over the years.

I love so many of the new ideas Disney has introduced into their parks. I could wander around places like Star Wars: Galaxy’s Edge or the World of Pandora for hours, and I’m thrilled with new attractions like Star Wars: Rise of the Resistance. Despite this, I find myself trending towards grumpiness when Disney decides to build new attractions on top of old classics. Frozen Ever After is a perfect example—it’s a great ride, well-executed across the board. Despite the attraction’s merits,  I’ll admit I wasn’t happy they decided to build it right on top of Maelstrom, one of the most wonderfully weird attractions ever. On a rational level, I totally understand why Disney needed to do it, but I still get salty about it from time to time nonetheless. Heck, the last time I rode Frozen, I put in headphones and listened to the Maelstrom ride audio for old times’ sake (this was… a peculiar experience, like watching Snow White while listening to German death metal).

Like many of Disney’s older rides, I loved The Great Movie Ride. This distinctive attraction acted as my first introduction to the history of cinema and ultimately contributed to me choosing film as my career for much of my adult life. I loved the combination of a trip down memory lane with low-key thrills, particularly the unpredictable element of your tour’s “hijacker” who sometimes could be seriously hilarious.

In recent years, I began to recognize that The Great Movie Ride wasn’t aging well—the cast members seemed tired, less-engaged, and the animatronics were starting to show wear and tear. It seemed obvious the attraction would either need a thorough update or a complete makeover.

I wasn’t particularly thrilled when Mickey & Minnie’s Runaway Railway was announced. It felt like Disney was giving up on the park’s cinema roots entirely, caving to push a kid’s attraction into an easily convertible space. Wouldn’t the Magic Kingdom be a better place for Mickey’s first real ride? Would this be another sad overlay attraction, a lesser shadow built on the bones of greatness?

I staunchly held out riding Mickey & Minnie’s Runaway Railway until we finally spotted a 25-minute queue on a recent trip. I was surprised to learn that my husband—a huge Great Movie Ride fan—really wanted to ride it. I had forgotten that he finds the new Mickey and Minnie cartoons hilarious. I expected lots of screens, maybe some new effects, but largely for Mickey and Minnie to simply be inserted onto the track for the Great Movie Ride.

I’ll admit, I was wrong (it wouldn’t be the first time). Mickey & Minnie’s Runaway Railway is a great attraction that I’ve come to recognize truly deserves its place in Disney’s Hollywood Studios. Here’s what won this skeptic over…

I enjoy the occasional cartoon, but it’s been many years since I’ve been interested in any Mickey Mouse shows. In truth, I stopped caring about Mickey Mouse as a character years ago (with one exception—more on that later).

My tune started to change during an overnight stay at Disney’s Boardwalk last year. My husband was flipping through channels in our room and happened to pause on the new Mickey and Minnie cartoons—the ones where Disney combined the animation style of the old Steamboat Willie cartoons with the zaniness of newer iterations of Mickey Mouse (on a side note, as I wrote this, the thought occurred to me to look up “Steampunk Willie”—I was not disappointed).

We couldn’t look away.

The new Mickey & Minnie cartoons are truly hilarious. They were recently released on Disney+ as The Wonderful World of Mickey Mouse. I particularly loved the way some episodes are done entirely in foreign languages  (“Mickey! LA CROISSANT!”), taking the viewer around the world following Mickey and friends on increasingly more absurd adventures. We sat there watching cartoons for a good hour, cracking up together and sending particularly funny clips to our teen students.

I’ve said before that one of the most powerful draws of Disney parks is the combination of innovation and nostalgia. For adults, Disney parks are magical because they make us remember, tapping into that part of the imagination that makes you feel a bit like a kid again. At the same time, Disney often comes up with their best content when they combine nostalgia with new ideas.

The point is this: Disney made a smart call basing the ride off of these new, uniquely charming Mickey and Minnie cartoons rather than attempting to simply give visitors a museum of Mickey’s history. The cartoons are very well-done, to the point even adults can find them funny.

2. It fills an important role as an all-ages ride

Disney’s Hollywood Studios has always been a bit of a weird egg at Walt Disney World. In the past, it was largely considered a half-day experience mostly appealing to teenagers. That viewpoint has changed dramatically in the last year, particularly following the opening of Star Wars: Rise of the Resistance. Disney’s least popular park has, ironically, become its most popular these days.

A common criticism surrounding the opening of Star Wars: Galaxy’s Edge was that it didn’t include any kid-specific rides. From an adult perspective, this is understandable as Galaxy’s Edge serves a different purpose, mostly appealing to Star Wars and science fiction fans ranging from older kids to adults. It seems likely that Toy Story Land was built to counter this sentiment—while adults can enjoy Toy Story Land, it makes no apologies for being kid-focused. The issue with both is that fans of one may not be interested in visiting the other, purely because of age focus. While Disney’s Hollywood Studios has always included entertainment options that appeal to both kids and adults, its attractions mostly feel like they fall in the either/or category.

Mickey & Minnie’s Runaway Railway surprised me for its all-ages appeal. Sure, adults with zero patience for cartoons may not enjoy it, but the average Disney guest can enjoy it as much as Splash Mountain. It has no height restrictions—a huge win in a park where the top attractions all have one. The ride’s story holds universal charm—I could even see teenagers enjoying it if they like other parts of Walt Disney World. Mickey & Minnie’s Runaway Railway walks the line between enchanting for kids but also clever enough to surprise older audience members.

3. It’s not simply an overlay attraction

I mentioned this previously, but my biggest concern for Mickey & Minnie’s Runaway Railway was that Disney was simply going to insert Mickey Mouse into the Great Movie Ride. Disney has had both hits and misses in the “overlay” ride category. Frozen Ever After, for example, follows Maelstrom’s ride path exactly, but it manages to have its own appeal and character. It works. Stitch’s Great Escape would be an example of a miss. I honestly expected Disney to take the easy way out on this one.

While Great Movie Ride fans may recognize some of the rooms and sets (such as the Mary Poppins and Tarzan sets), Mickey & Minnie’s Runaway Railway properly feels like its own ride. I can’t say for sure if we followed the same track as The Great Movie Ride, but I appreciated that it didn’t seem like we did. The trackless ride vehicles add an element of unpredictability, and it really feels like a different type of attraction than its predecessor, less a tour and more of an adventure.

Now, I will say this—in a perfect world, I wish that Mickey & Minnie’s Runaway Railway had been built as an addition to Disney’s Hollywood Studios rather than a replacement for the Great Movie Ride. It may have been beneficial to add another attraction to the park’s line-up. Despite this, I still can appreciate that the ride is more than a simple overlay.