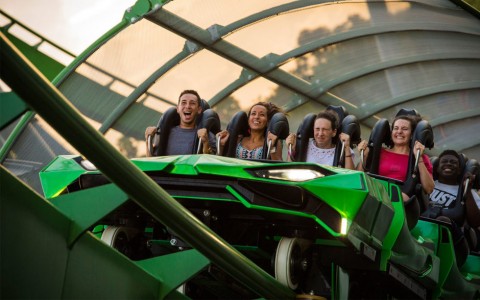 Founded in 1987 by Walter Bolliger and Claude Mabillard, B&M today is one of the world’s most respected roller coaster design & manufacturing films, supplying headlining attractions to amusement parks across the globe. In fact, you’d be hard off to find a major, thrill-focused coaster park in the United States (or elsewhere, for that matter) that doesn’t have at least one B&M creation among its lineup…! No, really… Try to think of one…

If you’re not sure, just venture into the rabbit hole of your friendly, neighborhood park’s unofficial fansite discussion board; scour RCDB; or more to the point, visit a park with a seasoned coaster enthusiast. Without fail, a coaster geek can spot a B&M a mile away thanks to unmistakable signs: rounded support columns; four-abreast trains; signature “pre-drops” before the biggie meant to relieve stress on chain lifts; signature maneuvers like wing-overs, dive loops, Immelmans, and cobra rolls… once you know how to spot them, B&Ms are everywhere.

In part, the proliferation of B&M rides around the world is thanks to the firm’s apparent three-word mantra: reliability, reliability, reliability. A designer who knows how far to push the limits (and what lines not to cross compared to, say, their nearest competitors, Intamin), B&M rides are trustworthy crowd-pleasers and people-eaters. But the spread of B&M coasters is also due to their part in the epic “Coaster Wars” of the ‘90s and early 2000s, when parks were willing to spend big to prototype B&M’s cutting-edge, record-breaking ride systems that would earn parks attendance, awards, and acclaim.

The breakneck pace of innovation and the thirst for record-breaking has (mostly) quelled. The primary competitors in the “Coaster Wars” – Six Flags and Cedar Fair – have since noticed that in their two decades of bigger-taller-faster obsession, they might’ve accidentally forgotten to invest in anything but thrill rides, leading to a significant slowdown in coaster construction throughout the 2010s and a needed shift toward flat rides, dark rides, and entertainment. But now, a new patent suggests that B&M may be ready for a comeback...

Today, we’ll tour through the major reinventions of the roller coaster pioneered by B&M over its thirty year history, watching as they reposition, reorient, and remake riders’ roles in thrill rides. Think you know what B&M might have planned next? We bet you’ll be surprised…

Given that Bolliger & Mabillard the designers had an extensive history in ride manufacturing, it’s no surprise that a few important connections lead to their new firm’s contracting with Six Flags to develop their first from-scratch ride: a stand-up coaster. Stand-up coasters had been a flash-in-the-pan trend thanks to 1984’s first-purpose built stand-up coaster, King Cobra at Kings Island. That ride’s manufacturer – TOGO – would create four stand-up rides in the ‘80s and convert three more.

Altogether, stand-up coasters are often relegated to a “gimmick” of the ‘90s. Their convoluted layouts of seemingly random twists, half-loops, helices, and inclined elements often triggered the dreaded “headbanging” against rigid shoulder restraints and left legs feeling like jelly. What’s worse, despite hydraulically-adjustable seats able to lock at any height (which massively slowed capacity), stand-up coasters were noted for their… discomfort. (See the faces and postures of riders in the photo of Iron Wolf, above).

Out of the seven built, three underwent prototype redesigns in the 2010s replacing stand-up trains entirely with raised, seated trains – a move that’s been widely praised as a relatively inexpensive way to return interest to coasters once relegated to mere ‘90s leftovers. As for the other four? Well… Keep reading... Because B&M’s innovation didn’t stop with their 1990 debut. In fact, their most legendary design was on the horizon!

It was the swinging, suspended family coaster developed by Arrow (and first successfully applied as the Lost Legend: Big Bad Wolf in 1984) that had first positioned riders under the roller coaster track. But Big Bad Wolf (and Arrow’s subsequent suspended coasters) were, at their most extreme, merely family coasters whose thrills came not from harrowing dives, but the exaggerated swinging along turns.

Spurred again by the general manager of Six Flags Great America (where Iron Wolf had debuted), B&M was tasked with designing an “inverted” (below-the-track) coaster with inversions (upside-down elements). The result was BATMAN: THE RIDE (1992). Rather than “suspended” on a swinging arm, inverted trains run directly attached to the wheel carriage with dangling legs exposed as if on a ski-lift. Batman’s inverted trains tear along the outside of a vertical loop, sweep through “wing-over” corkscrews, and snake into and out of an elegant-looking “cobra roll” – mainstays of the ride type to this day.

Moreso than perhaps any patented coaster design in history, B&M’s Inverted coaster became an icon of the ‘90s “Coaster Wars,” and today it’s the rare thrill park that lacks one. Aside from twelve clones of Batman: The Ride (seven of which bear the name), a further two dozen inverted installations include FLIGHT DECK (California’s Great America, 1993), RAPTOR (Cedar Point, 1994), NEMESIS (Alton Towers, 1994), MONTU and the ski-lift themed ALPENGEIST (Busch Gardens Tampa and Williamsburg, 1996 and 1997), SILVER BULLET (Knott’s Berry Farm, 2004), BANSHEE (Kings Island, 2014), and the only B&M roller coaster to ever be permanently removed, DUELING DRAGONS (Universal’s Islands of Adventure, 1999 – part of the Lost Legend: The Lost Continent).

While a “sitting” coaster may not sound groundbreaking, 1993’s KUMBA (Busch Gardens Tampa) successfully merged the by-then standards of a B&M (four-across seating, a pre-drop, precisely calculated layouts with graceful, powerful, and sweeping inversions) into a genre all its own. No one makes “standard” coasters quite like B&M.

In fact, urban legend has it that classic coaster manufacturer Arrow Development tried (and failed) with a ride meant to be Kumba’s counterpart at Busch Gardens Williamsburg, the Declassified Disaster: Drachen Fire. The first (and only) Arrow coaster to use round supports and feature B&M standard elements like a cobra roll, Drachen Fire may have looked like a B&M, but it didn’t feel like one. That’s why it’s often used as an example of how – in the ‘90s – new manufacturers like B&M made old-school coaster designers of “Double Loops” and “Corkscrews” seem sadly obsolete. It was 1997’s inverted Alpengiest that unofficially killed Drachen Fire by showing guests that coasters could be intense, but, y’know, also comfortable.

So, though a “sitting” coaster might not sound like a landmark “innovation,” the five B&M has created are pretty legendary – after Kumba, DRAGON KAHN (PortAventura, 1995), WILDFIRE (Silver Dollar City, 2001), Hard Rock Park’s LED ZEPPELIN: THE RIDE (2008), and perhaps the world’s most recognizable roller coaster, THE INCREDIBLE HULK COASTER (Universal’s Islands of Adventure, 1999). Speaking of which, B&M famously agreed to build Hulk on the condition that Universal find someone else to manufacture the ride’s launch system. In their quest for reliability, B&M didn’t want to touch a launch with a ten-foot pole, and in fact, has only ever designed one launch coaster, ever…

But even if B&M shied away from unreliable parts, the four unique coaster arrangements they perfected at the dawn of the New Millennium and through the 2000s remain among the most iconic coaster styles… And then there’s that nagging question: what’s next, and what does B&M’s recent patent filing suggest their next endeavor could be? Read on...

I used to call Cedar Point's Mantis "The Nutcracker"