Since its first roller coaster debuted thirty years ago, B&M has become a staple of modern amusement parks. Don’t misunderstand: despite the end of the “Coaster Wars,” competition is more fierce than ever.

Then there are mid-sized – but substantial – players like Premier Rides (known for its LIM technology as seen on Revenge of the Mummy, Flight of Fear, and Rock ‘n’ Roller Coaster, SeaWorld's Ice Breaker, and the nine Sky Rockets, including Tempesto, Tigris, and Electric Eel), Vekoma (Disney’s go-to partner as well as a major player in regional parks), and Zierer (a German manufacturer who made a splash with their freefall drop track coaster).

And after all these years, we still can't discount longstanding titan Intamin. Sometimes simplified as the "experimental" and "extreme" counterpart to the steady and reliable B&M, Intamin made a huge name for itself by shattering the 300- and 400-foot height barriers (with Cedar Point's Millennium Force & Top Thrill Dragster, respectively), and their high-tech launch systems, extreme elements, and record-breaking rides were staples of the Coaster Wars. After a few years focused mainly on the growing Asian market (after a few notable issues with typical U.S. partners Cedar Fair and Six Flags), Intamin returned to headlines in a big way with their cutting-edge, tech-infused, element-rich, multi-launch, and temperamental creations like Hagrid’s Motorbike Adventure, Pantheon, and the Velocicoaster.

Yet despite it all, B&M remains a force to be reckoned with. It’s true (and in many cases, fair) that some accuse of B&M of peddling in cookie-cutter hypercoasters and increasingly-over-engineered creations; that modern B&M may have lost its “bite” in favor of mass-production (no less than six are on the way in 2021); that the proliferation of inverted, dive, wing, and hyper coasters has saturated North America with near-enough products. (And frankly, some parks need a personality-filled, one-of-a-kind, feature-laden creation from Premier, Intamin, Zierer, or RMC rather than the B&M airtime coasters they’re inevitably going to get.)

But after creating the definitive forms of stand-up, inverted, diving, flying, and winged coasters (and essentially setting the industry standard for sitting and hyper coasters), the question has to be asked: what could be next for B&M? Thanks to a recent patent filed by the Swiss company, we may have a peek into what the future may hold… and frankly, it’s a surprise…

As we mentioned, B&M didn’t create that many stand-up coasters to begin with; just seven, versus the dozens of inverted coasters, for example. Four of those seven remain in operation as designed: GEORGIA SCORCHER (Six Flags Over Georgia), GREEN LANTERN (relocated from Kentucky – where it had been Chang – to Six Flags Great Adventure), RIDDLER’S REVENGE (Six Flags Magic Mountain), and VORTEX (Carowinds). The other three of those seven were given new life (and marketed as new)...

... with a new fleet of modified trains. Seated, floorless, and raised (to accomodate for the higher heartline design of the standing layout), three stand-up coasters have been "revitalized" with this clever fix – Cedar Point’s Mantis became ROUGAROU in 2015; Great America’s Vortex became PATRIOT in 2017; Six Flags America’s Apocalypse (once the original Iron Wolf back at Six Flags Great America) was reborn from the ashes as the floorless, sit-down FIREBIRD in 2019.

Each was a revolution given that merely purchasing new trains allowed operators to rid themselves of a ‘90s gimmick and refresh a ride enough to warrant being marketed as a new, fresh experience. Maybe that’s why B&M’s new patent suggests that the future may very well be in the past... 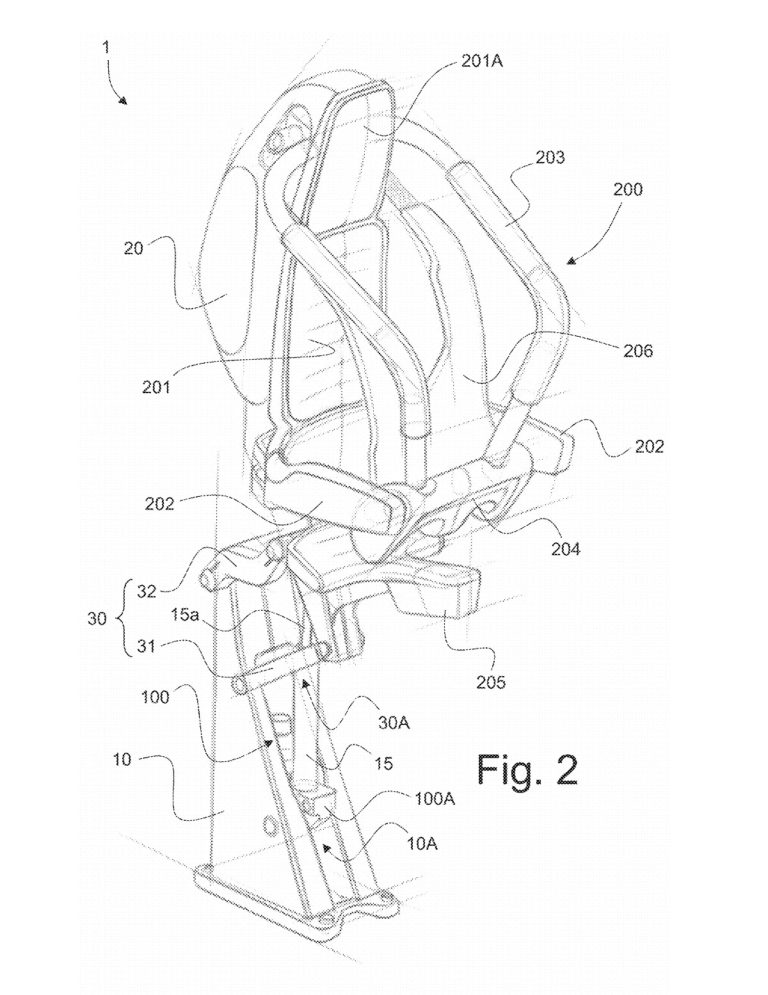 This summer, the Swiss company filed paperwork registering a new seat design. But unlike the groundbreaking arrangements of inverted, dive, or wing coaster trains, filed patents suggest that B&M engineers have been hard at work refining a... classic? Almost unbelievably, B&M doesn't seem to have given up on its stand-up coasters. Rather, their newest patent reveals that engineers have created a new stand-up coaster technology that could alleviate the two primary complaints guests had about this "gimmick" ride style.

First, the patent reveals the replacement of B&M's thick, hard, over-the-shoulder restraints (the cause of frequent "headbanging" and earring injuries on classic stand-ups) with a modern fix. In fact, many of B&M's recent coasters have opted for much less restrictive over-the-shoulder apparatus with wider-set structural restraints and a flexible "vest"-style restraint that holds tight against riders' torsos. While it may not leave riders as free as a simple clamshell waist restraint (and can be unfriendly toward guests with larger body dimensions), the new variation certainly reduces headbanging. It's not only been used on new, post-2012 B&Ms, but retrofitted into older trains to improve rider comfort.

Second, the patent shows B&M engineers have worked on a way to add some elasticity to the standing position. After all, the major complaint many riders leveraged against stand-up coasters was the major discomfort brought on by blood pooling in rigid, straight legs and – of course – discomfort due to the bicycle-style seat riders straddle. But according to this patent, a new option may exist: standing "seats" that not only lock to a comfortable height for each rider, but now can also slightly adjust during the ride. Think of it as shock absorbers, relieving pressure on legs (and groins) by adjusting to negative and positive Gs.

The future in the past?

It could very well be that B&M plans to roll-out either the upgraded stand-up train or the replacement floorless vehicles at the four remaining stand-up coasters from the ‘90s. It could also be that B&M is hoping that if they can perfect the stand-up concept with a fresh, comfortable train (eliminating both the rigid positioning and the painful over-the-shoulder restraints), they could actually make the stand-up coaster a contender again – a 21st century revival of '90s nostalgia.

Even if B&M’s plans for the stand-up coaster don’t expand beyond a potential fix for its remaining standing installations, it’s noteworthy that the company would bother to return to the long-lost ride variation. And who knows? Maybe before you know it, B&M’s new patented stand-up train will spark a second age of the stand-up coaster… Maybe one day, there will be more B&M stand-ups than inverted and hyper coasters combined...!

What do you think? After all these decades of innovation, are you surprised to find that B&M’s latest patent suggests an upgrade to a thirty year old ride system? Do you think a new age of stand-up coasters could be on the horizon? Or is this patent merely a promise to fix the last ‘90s remnants of this “gimmick”? How would you like to see stand-up trains rolled out on B&M classics?

I used to call Cedar Point's Mantis "The Nutcracker"