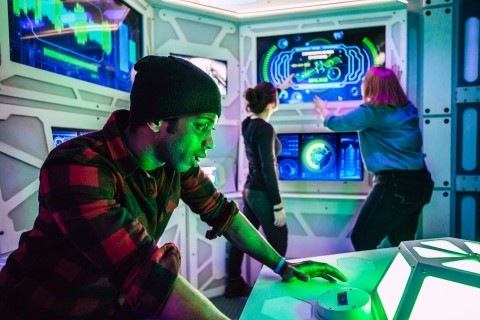 Walt Disney World and Universal Orlando Resort have both reopened, but many guests are still nervous to step back into Florida’s theme parks. Things are still a little weird at both resorts, and guests looking for entertainment in the Orlando area might be curious if there’s any way to get theme park quality thrills without the crowds.

We might have just the puzzling adventure for you…

We’ve written about escape games before, both in regards to their potential to inspire theme park attractions and how they remain some of Orlando’s best attractions for theme park fans. The base concept is simple: a team of guests are given a limited amount of time (usually an hour) to escape from a themed room. Don't worry-- the room isn't actually locked if you need to get out in an emergency. In many ways, escape games are like living, hands-on versions of old point-and-click adventure games like King’s Quest or Myst—a literal locked room mystery that can only be escaped through guests solving clever puzzles.

While escape games are growing in popularity across the country, Orlando has a unique concentration of some of the nation’s most creative escape rooms. These aren’t your typical jewel heist, prison escape, or serial killer scenarios… Many of Orlando’s best escape games carry theming and stories so well thought out, you might think you’re at Walt Disney World or Universal Orlando Resort.

The best part? All of the escape games listed have instituted smart policies to keep guests safe during the COVID-19 pandemic. You can check the policies for each location at their websites (linked below), but general rules we’ve seen include thorough cleanings after every game, contactless check-in methods, requiring masks in common areas, and best of all, most companies are giving guests private gaming experiences only—no teaming up with strangers!

Curious? Here are five of the top escape games we found in the Orlando area, as well as what type of theme park fans might enjoy them…

We’ve gushed about The Escape Game Orlando before and will happily do so again—this place remains at the top of our list for theme park regulars looking to try top notch escape rooms. They are also the only escape game we’ve had the pleasure of visiting in person post COVID-19, and they are doing a great job keeping guests safe.

We’ve played most of the games at The Escape Game Orlando, and our favorite room thus far is Gold Rush. This rustic adventure gives guests one hour to locate a lost cache of gold hidden by an old prospector. The multi-room setting reminded us distinctly of Magic Kingdom’s Frontierland, and the puzzles were some of the most fun we’ve found in any escape game so far.

On the opposite end of the spectrum, fans of futuristic adventures like Epcot’s Mission: SPACE or Magic Kingdom’s Space Mountain may enjoy Mission to Mars, where guests find themselves trapped inside a Mars landing pod with only one hour before cosmic radiation fries your vessel. We take teens to the Escape Game Orlando every year, and this one has proven a surefire hit with every group.

Basically, all of the games at The Escape Game Orlando are excellent. Their version of The Heist (many escape game companies have some sort of heist game) is fun and well-layered. Prison Break is a doozy when it comes to difficulty, but its cinematic themes may remind some guests of The Great Movie Ride. Special Ops: Mysterious Market is a particularly well-thought out adventure to foil a terrorist plot and even their newest game, Playground, keeps topping charts for its immersive schoolyard setting and innovative puzzles.

2. Escapology (for fans of 20000 Leagues Under the Sea, the Tower of Terror, and The Wizarding World of Harry Potter)

Escapology is a nationwide escape game franchise frequently praised by fans for their insanely immersive theming and engaging stories. While they have games for all ages, we appreciate that many of their games will appeal to an older audience with a taste for mysteries.

There are so many choices at Escapology, but one  that stood out to us for Universal Orlando Resort fans is The Budapest Express—a Poirot-style murder mystery set aboard a luxury train (some of you Hogwarts Express just got really interested). Guests who tried Budapest Express lauded its clever layering which takes guests car-by-car closer to identifying the killer.

Similarly, The Mansion Murder gives guests an alternative setting to try out their deductive skills as they solve a murder in a lavish mansion. In some ways, the setting reminds us of Disney’s Hollywood Tower of Terror as well as Universal’s Harry Potter and The Escape from Gringotts.

Have you been missing Disney’s 20000 Leagues Under the Sea submarine voyage? You may like Escapology’s Under Pressure game, where guests have 60 minutes to escape a sinking World War II era submarine. Other games available include Narco, The 7 Deadly Sins, Antidote, and even a Scooby Doo themed room.