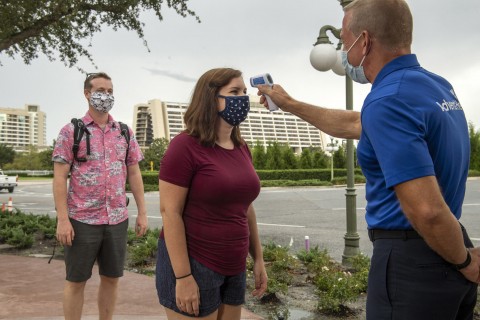 Disney parks are back, and it’s not surprising that things are a little weird.

We all expected it—there’s no way Disney could come back from as significant a setback as multi-month closures due to a pandemic and things not be strange. All eyes are fixed on Walt Disney World, Disney’s first US theme park to open.

While guests have mixed opinions about whether Walt Disney World should have reopened in the first place (that’s another subject for another time), those visitors who have braved the parks have shared mostly pleasant experiences. Most agree that short of not reopening at all, Disney seems to be going above and beyond to reduce risks while still giving visitors a fulfilling experience. High points include historically low crowds, the successful implementation of character “cavalcades”, as well as pressure being reduced for trips to be planned 6 months in advance.

Despite these positives, there’s no denying that Walt Disney World’s reopening is going to feel weird in a lot of ways.

Some of these are obvious things. It’s hard to picture Disney parks without fireworks, character greets, or parades. Mask requirements and social distancing are going to take some getting used to. However, there are other subtle areas that are likely to prove just as weird to guests—things that we all just take for granted as part of the Disney parks experience that have unexpectedly changed. Here are a few that come to mind…

1. A comeback for low crowds

Let’s start with a positive one. Walt Disney World’s post-lockdown reopening marks the first time in nearly a decade that guests can enjoy most of the parks with almost no crowds.

Walt Disney World has become an increasingly busy place particularly over the past 5-10 years. Catching Disney parks during the “off-season” used to be a fairly reliable science, but days where the parks feel empty have become few and far between. Much popular wisdom for when to visit no longer applies, and the only truly reliable times to catch the parks with significantly low crowds tended to be Super Bowl Sunday or the days preceding a major hurricane.

Guests who have visited Walt Disney World since it’s mid-July reopening have remarked that they were impressed by how light crowds were (the one exception, unsurprisingly, is Disney's Hollywood Studios due to the park's recent popularity and small size). By necessity, Disney has hard to start out with historically low capacity limits to allow guests to maintain social distancing, and that’s making for a decidedly relaxed experience for visitors used to navigating throngs of people. There’s a wonderful freedom to explore the parks when crowds are so low, and even without FastPass+, attractions queues are short across the board.

Guests have long questioned if Disney needs to start limiting capacity to deal with overcrowding. While this may not be feasible from a business standpoint for the long term, it is nice to see this experiment play out for a season without a hefty price tag attached. While it may feel strange, this one is a good type of weird.

FastPass+ has become an essential part of planning a Walt Disney World vacation. How you spent those valuable three slots can determine the course of an entire day, affecting everything from dining reservations to what order to visit other attractions.

With Disney’s post-lockdown changes, it’s likely that the days of FastPass+ acting as the spine for trip planning are over for good.

If you were a Disney regular before FastPass+ was introduced in 1999, you may remember guidebooks advising smart planners to carefully lay out itineraries to avoid long lines. One common strategy was to arrive at opening gate, hit one or two E-ticket attractions immediately, sneak in a few mid-level rides, take a break when crowds surged at lunch time, then return and visit other high-demand attractions during parade or firework times.

FastPass+ changed much of this dynamic both by limiting times of day guests could get into the “faster” line for attractions, as well as distributing crowds in ways that weren’t always easy to predict. For high-demand attractions like Frozen Ever After and Avatar: Flight of Passage, scoring a FastPass+ reservation often proved the only way to avoid a multi-hour wait.

FastPass+ has introduced as many problems as it solved (such as negating the value of stand-by lines as “crowd sponges”), and it has long been rumored that Disney has considered doing away with the system. With Disney’s post-lockdown reopening, this has become a likely reality, and it’s going to dramatically effect the way some Disney regulars plan trips.

So far, lines in most of the parks have been so short that guests can kind of meander about as they please (once again-- Disney's Hollywood Studios is the exception), but when capacity starts to increase, guests who used to rely on FastPass+ will have two choices. The first is that meticulous planners may have to learn how to adopt some of those old strategies for hitting attractions at specific times to avoid long lines. On the flip side, many guests who are used to following the rhythm of Fastpass+ reservations may have to adjust to a more flexible style of vacationing, figuring out things as they go. Either way, it’s going to mean a lot less structure than some visitors are used to.

3. Park hopper enthusiasts may get antsy

Another key change that will be strange for many guests is the (hopefully temporary) elimination of park hopping.

It’s sometimes hard to explain why park hopping is so beloved by Disney fans. Many guests prefer to spend Disney days milking one park for all it’s worth, and that’s perfectly fine as a trip planning strategy. For fans of park hopping, however, there’s an undeniable freedom to plan vacations in unexpected and creative ways. I can’t remember a single Disney trip where we didn’t park hop to take advantage of dining options, avoid crowds, or strategically enjoy experiences across different parks. For Passholders, park hopping is particularly attractive since it allows guests a huge amount of spontaneity to explore multiple parks in a day.

The elimination of park hopping is going to be difficult to wrap one’s head around if you’re used to flitting from park to park. It’s actually one of the changes that feels the weirdest for me when planning our eventual return—90% of our visits in the last year were spent park hopping between Epcot and Disney’s Hollywood Studios. I’m having to open new parts of my brain just to grasp the idea of spending all day at just one park again (even if I probably could burn half a day just loafing around Batuu playing Star Wars Datapad). For habitual park hoppers, it’s either going to mean shorter days, the implementation of mid-day breaks, or a very purposeful shift in trip-planning to really get the most out of every park.