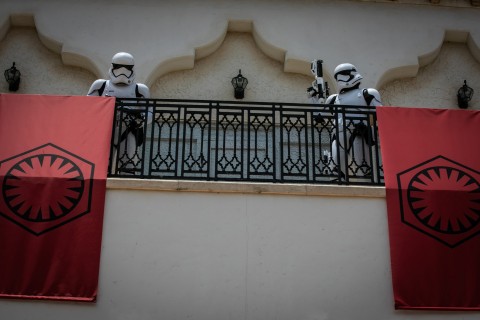 We are edging closer to Disney’s US parks reopening after the longest closure in the company’s history, starting with Walt Disney World reopening starting on July 11th. Early details on Disney's post-shutdown plans have finally been revealed, and it’s fair to say that it’s going to be a little weird for a while.

As Disney tries to balance getting guests into the parks while keeping people safe, it’s meaning an upcoming season of cutback park experiences like no characters, no fireworks or parades, mandatory masks and temperature checks, a required reservation system even for annual passholders, and even the likelihood of no cultural representatives for a time in World Showcase.

That’s… a lot of lemons.

Despite the major bummer surrounding these necessary policies, the news isn’t all bad. The parks reopening is a huge step forward, but more importantly, if Disney plays their cards right, they could actually use this unexpected reset to solve some major longstanding issues in the parks. Here’s a few that stood out to us…

This may seem like an odd one, offhand, for longtime Disney fans. Disney has a spectacular reputation for sanitation—amusement parks used to be considered famously dirty places, but Walt Disney insisted he wanted his parks to be different. Disney has always stood above their competition by going above and beyond to keep their parks clean with easy access to trash cans, attentive sanitation teams, and even by teaching cast members to always pick up and throw away trash if they see it.

Despite this, theme parks can be real petri dishes for germs to be passed around…

One of the reasons Disney has had to hold off so long on reopening their parks is that it is nigh on impossible to completely eliminate the spread of germs at a theme park—particularly one with lots of hands-on experiences with thousands upon thousands of guests spending time in close quarters. I’ve definitely gotten sick on my fair share of Disney excursions, and certain hands-on experiences and rides almost certainly played a part (like the time I spontaneously sprouted warts on my hands a day or two after riding Millennium Falcon: Smugglers Run—I know, gross).

The truth is, as Disney parks keep getting more interactive, the company has needed to find better ways to keep rides and interactive queues clean. It may not be practical to give every ride vehicle a wipe down after every passenger, but even more thorough and frequent cleanings is a good step forward to reduce the spread of germs. When hands-on experiences re-open, I know I’ll be a little more at ease riding fan favorites like Test Track, Millennium Falcon: Smuggler’s Run, and Buzz Lightyear’s Space Ranger Spin knowing that Disney is wiping down the ride vehicles more often and paying closer attention to reducing the spread of germs in the parks (even if I will still be slathering on hand sanitizer after every ride).

Crowd control is another area where Disney has often outshined their competitors—just take one look at Universal Studios’ bonkers locker situation and you can gather that Disney has some things figured out that other parks don’t. Disney has actually gotten so good at crowd control that when they opened Star Wars: Galaxy’s Edge in Disneyland, the land contained so many subtle crowd control measures that it seemed empty and led to negative press.

That isn’t to say that the company doesn’t have some room for improvement.

Every Disney park includes areas known for insane crowd congestion. Magic Kingdom and Disneyland probably suffer the most from this since they were both built before theme parks started drawing hundreds of thousands of people every year. Getting stuck in a slow-moving crowd is no fun, but in many ways, congestion has just become accepted as part of the theme park experience.

Social distancing requirements are going to force Disney overseers to get creative about dealing with crowd congestion—not just for the initial rebound from COVID-19 but for the long term. This isn’t necessarily a new problem. The company made significant changes to crowd flow at Disney’s Hollywood Studios preceding the opening of Star Wars: Galaxy’s Edge, and the new construction at Epcot has included improvements to crowd flow like the removal of the Leave a Legacy stones in the Spaceship Earth courtyard.

The minds behind Disney are highly creative, and it seems likely that the downtime from the outbreak could be a prime opportunity to deal with some of the more troublesome crowd control areas in the parks with either minor or major adjustments. This can definitely prove a positive in the long run for improving guest experiences.

Once again, we start on a positive note—Disney has made some amazing strides the last ten years to deal with the most miserable part of visiting a theme park, standing in lines. In our article on why the 2010’s were an awesome time at Walt Disney World, we explored how Disney improved guest queuing experiences by introducing interactive games in queues, play areas for small children on rides like Dumbo, and finally by introducing virtual queues with the arrival of Star Wars: Galaxy’s Edge and Rise of the Resistance.

Social distancing is now adding an entirely new element to the puzzle.

It’s hard to say what the best policy is going to be for Disney parks to handle queuing while COVID-19 is still a concern. Do you space guests out and sponge as many guests into those lines as possible to keep thoroughfares open? On the other hand, is it better to use virtual queues to keep time spent in lines short and spread guests out throughout the parks? Either way, the standard practice of packing guests into lines has to be addressed.

We already know one park mainstay might be on its way out—Fastpass+ (Disney has announced the service suspended indefinitely following the outbreak). The Fastpass+ system is appreciated by many guests (myself included), but it has introduced its share of problems into the Walt Disney World crowd control situation. Queues serve an important purpose in theme park design—they corral guests into designated areas that keep shops and thoroughfares from getting too congested. With fewer guests in line, crowd control in the parks became much more challenging, and it also means guests largely skip many crucial storytelling elements in ride queues. It also doesn’t actually increase ride capacity—it just creates the illusion that it does.

In short, Fastpass+ is a good idea, but with changing times, it is a concept that has needed some refinement and rethinking. The resets following COVID-19 are an opportunity for Disney’s creative minds to take on the problem and see what solutions they can come up with to improve on the system, whether through wider use of virtual queues or by finding new ways to rethink stand-by lines.

Or, just wait it out and save your money for something better then spending it on something that overrated. As expensive their price is, they won't be seeing that many people going to their parks for a while.