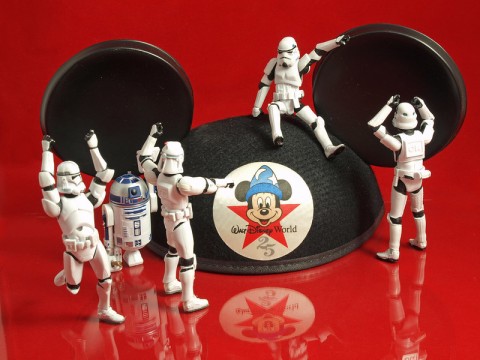 Let’s face it—some of us have developed a severe case of the Disney Shakes.

No, I don’t mean that Peanut Butter and Jelly Milkshake you nailed last week—we’ve explored the phenomenon known as the Disney Shakes before here on Theme Park Tourist. You may be familiar with its many symptoms: insatiable cravings for Dole Whip… the sudden urge to pin trade with the Publix cashier… uncontrollable hum-singing the Fantasmic soundtrack… subconscious swaying in your home office chair to make it feel like the Pirates of the Caribbean boat…

Disney parks regulars are no doubt experiencing some withdrawals from visiting the Most Magical and Happiest Places on Earth. Reading up on the latest news about the parks is great, but what is a Disney fan to do when that just isn’t cutting it?

If we’re all stuck at home anyways, what’s say we take this problem on with some style. It’s time to make like Figment and use our imaginations, Disney fans. Here are some of the most innovative, out-of-the-box, borderline wacky strategies we found for getting your Disney parks fix when the Disney shakes strike during this season…

Throwing up a few YouTube videos of Flight of Passage is for amateurs—fortune favors the bold!

One of the most delightful phenomenon to come out of the COVID-19 lockdown has been Disney superfans cooking up home versions of their favorite rides. Some approaches have been simple, like this family’s laundry basket version of Splash Mountain…

Or this family who used desk chairs, cardboard, and random props to recreate Toy Story Mania, Kilimanjaro Safaris, and Soarin’…

Or these folks who DIY’d ten different kids rides using household objects (right down to the “pull the yellow strap” seatbelt check!)…

There are so many of these to enjoy that we actually did an entire article on them. The sky is really the limit on how far you can go with homemade rides, but some of the ideas are positively brilliant. I’m still waiting to see a DIY’d Injun Joe’s cave made of butcher paper, glowing skulls, and existential horror…

Part of what makes Disney parks so mesmerizing is the way Imagineers manage to engage all of your senses. Wherever you go at Disneyland or Walt Disney World, you can be sure that your eyes will be dazzled with illusory wonders, your ears soothed by ever-present ambience, and your nose treated to enticing smells.

Clearly, we must find a way to replicate this at home.

First, we need some sounds— music and ambience is everything at Disney parks. Fortunately, if you’re reading this article, you probably already have access to an enormous databank of Disney park sounds on YouTube. I’m particularly fond of this playlist, but you could really look up anything you want from ride and parade audio to old timey ambient soundtracks from the parks. Check!

Now, we need some proper lighting. Sure, you could invest in some fancy smartlights (I actually use pictures from Disney parks to program scenes into my Hue Lights all the time), but if those aren’t an option due to budget constraints, we have to get creative. Throw up some lamps or Christmas lights and tint them using scarves or colored plastic—you could even drill some holes into ping pong balls and pop them onto Christmas bulbs to get a nice dithery, Hollywood glam effect. For the ultimate cheap light show, sugar up your kids on Grey Stuff and Mountain Dew and set them loose with glowsticks and colored flashlights. Check!

Finally, we need the smells. If you’re into baking, you can definitely get that intoxicating Main Street Bakery scent by just throwing some cinnamon rolls to cook, but what if you don’t have anything to bake with? You could try the trick of baking two tablespoons of vanilla extract in a dish at 300 degrees for twenty minutes to fake it. Some essential oils also give a distinctly Disney vibe, like how Sweet Orange brings to mind Soarin’ Over California or Rose might remind you of the gardens at the Grand Floridian.

For the most authentic Disney smells, you may want to check out companies that specialize in replicating park scents in candles and wax melts like the Magic Candle Company (I’m personally fond of the “Rome Burning” fragrance from Spaceship Earth). For a little too authentic, you could just leave the shower on and fog up the house to match Florida’s humidity…

3. Have yourself a homemade Disney feast

Don’t think we forgot taste. Many of us have taken up a little more cooking than usual—that means a prime opportunity for some Disney parks favorite recipes!

There are so many Disney parks recipes available online. Some of these are official recipes from Disney cookbooks, the D23 fan club, or the Disney Parks Blog, though I personally think some of the recipes Disney releases are doctored (Dole Whip, for example, is vegan in the parks, whereas the recipe Disney released is not). Most of the recipes you can find online were simply figured out by creative home cooks with a lot of talent and time.

There’s no need to reinvent the wheel—we covered 8 of our favorite Disney parks sweet treats you can make at home, as well as 8 amazing savory recipes you can make yourself! Some of the highlights include Dole Whip Floats (including the vegan version), School Bread, Epcot’s Berbere beef, and Flame Tree Barbecue’s famous sauce and rub!