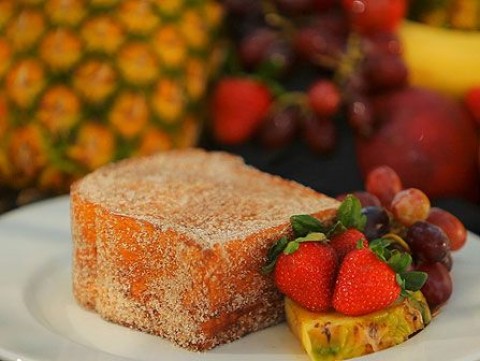 Stuck at home? Time to bring some Disney magic into the kitchen! There are a lot of recipes for Disney favorites online, so we decided to focus on one of the most popular areas of Disney dining first: sweets and desserts.

Whether cooking is your happy place or if you can barely cook oatmeal, here are eight Disney parks sweet treats you can make at home.

Let’s just get right to it—some of you straight up have the Dole Whip twitch right now.

I’m sort of astonished how many years it took me to finally try a Dole Whip Float. This magnificent pineapple soft serve escaped my attention for decades of park visits. The more I saw people rave about it online, the more my curiosity piqued until I finally had the opportunity to try a Dole Whip Float on a quiet morning at Magic Kingdom.

Sweet Dole Whip, where had you been all my life?

Dole Whip is one of those mysterious magical desserts that I really expected to be too complicated for the average home cook to make, but making Dole Whip at home actually isn’t that complicated. The simplest recipes, like this one from Bigger Bolder Baking, involve only two ingredients: frozen pineapple and coconut milk. Really, Dole Whip is just a very thick smoothie of sorts.

If you want something a little more refined, Delish.com took a crack at a more advanced Dole Whip copycat involving some additional ingredients like frozen bananas and sweetened condensed milk. Even this recipe isn’t that difficult, and it adds some nice textures that might make the end result closer to Disney’s.

Whichever Dole Whip version you end up liking, turning it into a float is easy—just add pineapple juice! Tastes just like Adventureland in a cup!

It’s not too hard to find recipes online for Mickey Beignets and churros, but we didn’t want to just focus on the obvious Disney recipes you can try at home. What about some of Disney’s more eclectic sweet treats?

If you’ve been to The World of Pandora at Disney’s Animal Kingdom, you may have had the pleasure of trying Pongu Lumpia, a native Pandoran pastry dish (wonderfully in line with the land’s exotic sci-fi dining scene). The dessert could best be described as a sort of spring roll filled with cream cheese and pineapple (got to get that Vitamin C).

Fortunately, Disney provided a recipe to make your own Pongu Lumpia at home.  Most of the ingredients are pretty simple to find, and spring roll wrappers are available in the Asian section of many national grocery stores. The end result is a crispy sweet pastry perfectly suited to Pandora and a great way to bring a little Disney magic home.

3. The Grey Stuff (Be Our Guest, Magic Kingdom)

Guests who have actually managed to get a reservation at Magic Kingdom’s Be Our Guest restaurant all seem to agree with Lumiere— try the Grey Stuff. It’s delicious.

Didn’t get to try the Grey Stuff before the shutdown or just craving a cup of that mysterious monochrome pudding? This is another Disney desserts favorite that is surprisingly simple and totally kid-friendly. Disney published a recipe on their Family site that breaks down the main ingredients as being Oreos (“scalloped cookies” for copyright purposes), chocolate and vanilla pudding mix, whipped cream, and milk. Blend it up and BAM—you’ve got Grey Stuff.

It really doesn’t get more complicated than that. Other recipes include the addition of some edible pearl sprinkles to add that Be Our Guest touch, but this one is pretty straightforward!