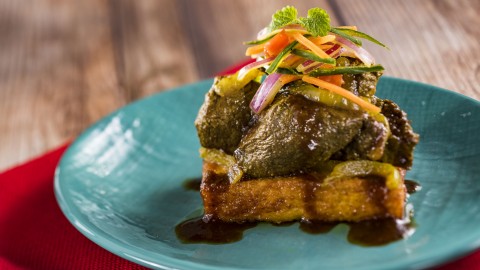 Time to recruit some help from Chef Mickey!

With Disney parks currently closed and COVID-19 lockdowns in full force, the ranks of home cooks are quickly growing. Many families around the world suddenly have an abundance of time indoors and a staggering increase in the number of meals coming from our own kitchens.

For Disney fans, this can mean not only a chance to brush up on your culinary skills but also to bring a little bit of The Most Magical Place on Earth home for the family.

We cracked the egg on this subject with our exploration of 8 Disney Parks Sweet Treats You Can Shamelessly Make at Home, but man cannot live on sweets alone (resist the temptation, dear reader). Disney’s desserts may get most of the attention, but there’s a reason why food is half the fun of a Walt Disney World vacation—to appreciate the sweet, you also need the savory, and we found dozens of excellent Disney parks recipes for entrees, appetizers, and sides you can make in your own kitchen.

As with our previous article, there are a lot of these copycat recipes online, so we decided to keep things simple by highlighting eight of the best savory recipes from Disney parks that we found for both traditionalists and adventure-seekers.

Pot roast is pretty popular at Walt Disney World—every one of Disney’s parks and many of their resorts offer takes on it. This makes sense since pot roast is a classic that isn’t too hard to make and provides plenty of food for big families.

Two Disney locations stand out when it comes to pot roast. The first is The 50’s Prime Time Café at Disney’s Hollywood Studios (the same place where the Peanut Butter and Jelly Milkshake recipe comes from). This dish is consistently rated as a favorite among visitors, a solid take on classic American pot roast. Recipes of Disney provides a good overview how to make it with information sourced straight from Disney.

Liberty Tree Tavern is another popular spot for pot roast fans, particularly if you prefer your New England pot roast with a nice gravy. Our friends at Disney Food Blog did a nice job laying this one out step by step, including some tips for getting it just right. Now all we need is a recipe for some mashed potatoes!

As with our sweets list, it’s not hard to find recipes for Disney mainstays like corn dog bites, loaded nachos, or mac n’ cheese garnished with goldfish crackers. We wanted to mix things up and include some recipes for our readers who love Disney’s more eclectic foodie scene.

Probably one of our favorite dishes every year at Epcot’s Food and Wine Festival is the Berbere Beef from Africa. It’s gone through a few different versions (like the Kenyan Coffee Barbecue Beef Tenderloin), but the basic premise has remained the same—a fall-apart beef tenderloin in a rich and zesty gravy full of spices atop pap, a form of grits.

Once again, Disney Food Blog comes to the rescue with a detailed walkthrough to make the flavorful dish yourself. Most of the ingredients are spices, many of which you may be able to find in smaller packets if your grocery store has an international foods aisle. It’s definitely a more complex recipe, but the end product is well worth it!

3. Good old fashioned pretzels (all over the place)

For many Disney visitors, the quintessential Disney treat isn’t anything fancy—it’s a warm, lightly salted pretzel.

Pretzels are seriously everywhere in Disney parks. Epcot’s Germany pavilion has some really great ones, particularly if you like to keep things traditional. You might assume you need to be some sort of pretzel origami specialist to get that magical Mickey shape, but this recipe from The Disney Chef  shows how to get the shape simply with a few strategic cuts, particularly using a “3” shape to get the nose and eyes—if you don’t have that cookie cutter, you might be able to MacGyver one.

For pretzel purists, Alton Brown has a great recipe from his show, Good Eats . The only tricky ingredient to get (besides, well, flour these days) is pretzel salt, but you can substitute kosher salt in a pinch. If your store is out of active dry yeast, there are also a number of substitutes you can use to help the dough rise (just look up “active dry yeast” substitutes—we recently tested this with a biscuit recipe using baking powder and it worked fine).

Disney has done some very creative things with mac n’ cheese. We could probably do an entire article of Disney mac n’ cheese recipes, but we wanted to highlight one that jumped out both for elevating this humble dish as well as not being too difficult to make.

Les Chefs De France is something of a staple for semi-fancy dining in Disney’s World Showcase, and their popular Gratin de Macaroni is the perfect dish to try at home if you want to take your mac n’ cheese to the next level. The upgrades come thanks to the use of Gruyere cheese, larger macaroni (rigatoni works), a tasty crust, and some pleasant spices. There isn’t much variation in the recipes for this: we like the one at Disney Food Blog!