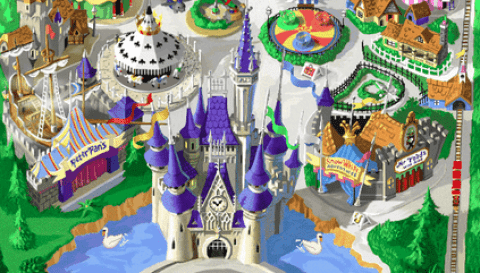 Whether we like it or not, there are simply times when going to Walt Disney World or Disneyland is downright impossible. As finances, jobs, and families shift, sometimes things just come up! Sure, we might not have expected a global pandemic to be the cause, but the point remains: when you can’t go to Disney Parks, why not bring Disney Parks to you?

There’s never been a better time for us to reach down through the archives and explore these eight throwback video games that will put Disney Parks right in the palm of your hand. For each, we'll include a link to a YouTube play-through or clip for your memory-making convenience! Did you play any of these games as a kid? Have you managed to dig any of them out of the attic to help get through the Disney Parks drought we’re in the midst of? Which would you like to see a modern revival of today?

Super Mario Kart debuted on the Super Nintendo in 1992, and as they say, “the rest is history.” Cartoon kart racing became a game genre of its own, encompassing titles like Sonic Drift (1994), Diddy Kong Racing (1997), Looney Tunes Space Race (2000), Nicktoons Racing (2000), and even Muppets RaceMania (2000). But for Disney Parks fans, the most memorable must be Walt Disney World Quest: Magical Racing Tour.

This Disney Interactive game allowed players to race through twisted kart courses themed to Disney World classics in ride-appropriate go-karts, popping Mickey balloons for power-ups (like dizzying teacups to release on fellow racers, or acorns to drive competitors off the road).

Though the game received mixed reviews (mostly criticizing its difficult and its late arrival and similarities to the Mario Kart genre), Magical Racing Tour is still remembered by nostalgic fans today for its music, charms, and, y’know, actually celebrating the theme parks and the incredible worlds and stories they contain! You can catch up on a complete collection of all the Magical Racing Tour kart courses in a play-through here.

Long before Disney was “The Mouse House,” Walt’s cartoon star was Oswald the Lucky Rabbit. However, Disney famously lost the rights to Oswald in 1928, leaving him behind with Universal while he and animator Ub Iwerks were forced to create something new: Mickey. In fact, Universal retained the rights to Oswald for nearly 80 years until, in 2006, Bob Iger traded Disney’s ABC sportscaster Al Michaels to Universal’s NBC in exchange for Oswald’s return. (Referring to his own trade, Michaels told ESPN, “Oswald is definitely worth more than a fourth-round draft choice. I'm going to be a trivia answer someday.”)

With Oswald in hand, Disney Interactive Studios created Epic Mickey. It’s a surprisingly dark video game where players control Mickey himself (armed with both constructive paint and destructive thinner) as he’s drawn into a dark, twisted, eerie cartoon version of Disneyland populated by “forgotten” rides, attractions, and characters, and run by a resentful and scorned Oswald. From a “Partners” statue replacing Mickey with Oswald to “lost” versions of Main Street, New Orleans Square, Adventureland, Fantasyland, Toontown, and Tomorrowland, players can use paint and thinner to either rebuild or destroy Wasteland while earning “Tickets,” beating platforming levels, and defeating bosses (like – and this is real! – fighting the “small world” clocktower)!

Naturally, the game ends with Mickey and Oswald realizing they’re not enemies, but brothers – the launching off point for Epic Mickey 2: The Power of Two with a co-op mode where players can play as Oswald.

By the way, we suspect that Epic Mickey at least somewhat inspired the 2012 re-opening of Disney California Adventure, wherein Oswald (and his “lost” friends like Clarabelle Cow and Horace Horsecollar) became de facto icons of the park via the 1920s-themed Buena Vista Street. In fact, Imagineers seemed to set up an intentional dichotomy, with Oswald plush and rabbit ears sold only at Disney California Adventure, as if a direct complement and counterpart to the Mickey plush and mouse ears of Disneyland! Get a glimpse into the shadowy world of Mean Street, U.S.A. – the hub of Wasteland – here.

It’s not quite right to call the Walt Disney World Explorer a game, per se, yet for plenty of ‘80s and ‘90s kids, this interactive software was just as exciting a way to spend an afternoon. After all, you’ve got to remember that before broadband Internet and sites like YouTube, this CD-ROM was the only way for many fans to hear their favorite music from the parks at home, to see videos and pictures of rides, to plan trips, and to get kids excited about a visit to Disney World! Essentially a computer promo piece for the resort, the Walt Disney World Explorer is exactly what it sounds like: a guide book on a disc, displaying an interactive map of the whole resort from which players can select hotels, parks, or games with a Tinker Bell cursor.

Zooming into any land, you can click on rides, shows, and attractions to learn about them from a pleasant narrator, then see “Backstage” or “Trivia” to view commercials, concept art, and models of each. The game also included games and trivia, information on the Reedy Creek Development Area, a “Hidden Mickey” challenge, and a timeline to watch the resort expand. Initially released in 1996, it was re-issued in 1998 to include Disney’s Animal Kingdom.

If you have any memories of the Walt DIsney World Explorer, it’s worth scrolling through the massive, 4-hour “play-through” linked below just to stir up some memories. (The music alone will really take you back...) If not, give it a look just to see what the parks looked like at the time! After all, the Walt Disney World explorer is forever frozen in 1996 when the Lost Legends: Alien Encounter, The Timekeeper, The Skyway, Mr. Toad's Wild Ride, Kitchen Kabaret, Universe of Energy, The Living Seas, Kitchen Kabaret, Journey into Imagination, and Horizons were all still around. (Within eight years, every single one would be gone... Yikes!)  Zip through every nook and cranny of the Walt Disney World Explorer in the mega-play-through here.

Kinect Disneyland Adventures is one of the most peculiar creations to come out of the then-emerging area of motion-based gaming. The game allows guests to walk through a practically brick-for-brick recreation of Disneyland, with pretty much every conceivable detail in place from flowerbeds to payphones; every corner, pathway, and shortcut has been accounted for, and almost every ride is there, perfectly in place (though Roger Rabbit’s Car Toon Spin, Tarzan’s Treehouse, Star Tours, and Indiana Jones Adventure are excluded due to licensing issues... after all, the game predates Disney's purchase of Lucasfilm that would've at least admitted the latter two).

The point of the game? Well… mostly, just to walk around Disneyland! There are mini-games associated with several rides as well as ongoing challenges like collecting character autographs, assembling costumes, performing fetch quests, visiting gift shops, and collecting snapshots for a photo book. But especially today, Disneyland Adventures is a spectacularly calming and much-needed way to return to the pathways of Disneyland to explore, take in the atmosphere and music, and at least feel like you’re around people again in the Happiest Place on Earth!

The exhaustive detail of Kinect Disneyland Adventures is practically mind-blowing, and oddly, it would be especially great for fans who typically align themselves with Walt Disney World and guests who have never stepped foot in Walt's "original Magic Kingdom" to get their first taste in such a to-scale, lovingly crafted recreation. Those players would be especially likely to get lost among the park's lands – forever frozen in their 2011 appearance. Take a virtual tour through Kinect Disneyland Adventures here.

Great article. One more title that I don't think you mentioned was Disney Coaster. A great game in the 90s where you try to replicate Disney coasters and build your own :-) I had the Windows Version.

Disney should do a paintball shooter with the maps being the park layouts. Can't use guns because of course, it's Disney. But paintball or maybe cartoon type guns with the various Disney IP characters would be awesome. How awesome would it be to be able to fly around circa-1980 Disney World as Peter Pan with a paintball bazooka while hunting down a friend playing Captain Hook as they dashed around Twenty-Thousand Leagues Under The Sea for cover? Heck, have Disney get with EA or other micro-transaction kings, and allow folks to purchase/earn-over-hours-play various upgrades to weapons, characters, and park maps if they have too.

Or maybe Disney could get with the creators of Rocket League to make a game where the personalized cars are Disney IP. The arenas are altered lands of the various Disney Parks.