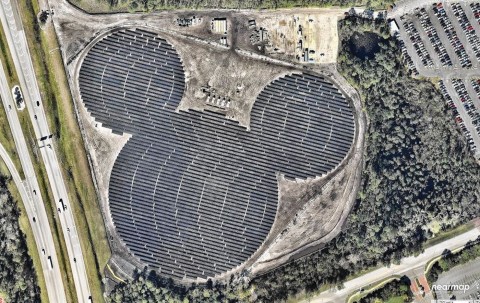 Hidden Mickeys... Whether you consider yourself a seasoned Imagineering insider or simply a vacationeer who loves an annual trip to Disney Parks, chances are you have been on the hunt for Hidden Mickeys – the elusive, I-Spy-ready icons splashed throughout the rides and attractions of Disneyland and Walt Disney World. Famously formed by a circular center topped by two circular ears (resembling the iconic silhouette of Mickey, of course), the hunt for Hidden Mickeys had produced blogs, books, tutorials, YouTube videos, and more.

And while you can spend hours and hours searching out these silhouettes while waiting in line or re-riding your favorite attractions, they aren't always formed by fine china curiously arranged on a dinner table, pebbles in pathways, or Mickey-shaped paint splatters...

Sometimes, they're big. Really big... So big, you really need to see them from above to even make sense of their size and shape.

Today, we invite you to join us on a worldwide tour of five massive Hidden Mickeys – so big, you may have stood inside of them and not even noticed! But rather than give it away, why not use this as an opportunity to explore a bit? For each Hidden Mickey below, we'll give you a "Scavenger Hunt" riddle to see if you can find your way to the mouse using Google Maps. (Side note: you'll probably want to open Google Maps on a separate device so you can read while hunting, or open the links in a new window as needed.)

If you can't figure out where to start, we'll provide a link right in each riddle to at least get you going. Afterwards, let us know in the comments – had you heard of all of these giant Mickeys? How many have you seen in person? Did you recognize right away that they were products of Imagineering hidden in plain sight?

Begin at this park's entrance gates
where, once inside, the future awaits!
Beyond the icon, banners flew

in this former spot for a fountain view.
And though it's full of dirt today,
this central plaza leads the way...
Continue west; cut through the land.
(Don't stop to glide or for the kitchen band.)
You'll fly right through some parking lots
filled with cars (that should be yachts?).
Has all this moving made you tired?
This Hidden Mickey's energy-wired;
an iconic sight known far and wide,
for tourists northbound on World Drive.

The story: The 22-acre solar farm in the shape of Mickey Mouse is both a modern icon visible to guests driving through the property, and one of Disney's recent impressive steps in reducing the emissions footprint of Walt Disney World. Though we don't yet know if they'll succeed in cutting their net emissions by 50% by their target (the end of 2020), the 48,000 solar panels that make up this "hidden" Mickey are enough to generate 5 mega-watts of power (reportedly about enough to power 1,000 homes).

And while it's big, it's neither the biggest solar farm on Disney property (that would be a new 270-acre build in 2019, which is ten times larger than this "hidden" Mickey and twice as large as the Magic Kingdom) nor the biggest hidden Mickey on this scavenger hunt.

Begin this hunt where most days close:
Where the fireworks end and crowds all slow.
Take a Monorail ride to the T.T.C.,
then find your car and you're home free!
Except, oh wait – a gas tank drought...
"We'll just fill up on the way out."
...It seemed so smart to wait this morning!
Now the dashboard light is warning.
Sure, a Disney trip means sacrifices,
but this Speedway has record prices!
It wasn't the only speedway here.
Just cross the road and you'd see near,
revving engines; racecars flew...!
At Disney, NASCAR dreams came true.
Though Disney's high speed racetrack closed,
some parts of it remain exposed.
This old upcharge in the parking lot
has left a Mickey pool to rot.

The story: It's wild to think that – for many years – Disney World had its own high-speed race track, right in the parking lot of Magic Kingdom... and no, we don't mean the nightly race to escape from the crushing exiting crowds post-fireworks. The Walt Disney World Speedway attraction opened in 1995, with a three-turn, tri-oval race track designed by the engineer behind the Indianapolis Speedway. Though it did occasionally host real car races, having NASCAR crowds and theme park crowds descend in the morning made for infamously unhappy guests and very long waits for parking.

So beginning in 1997, the primary purpose of the Speedway became the Richard Petty Driving Experience, giving NASCAR fans the chance to get behind the wheel of real NASCAR vehicles, or ride shotgun at speeds of 160 miles per hour. In March 2015, it was announced that the attraction would close for good that August. Just a month later, a driving instructor was killed in a crash (the first fatality to take place on the Speedway). Demolition began in fall 2015 to expand Magic Kingdom parking, but Google Maps still captures an abandoned Mickey Mouse pool that was once in the center of the raceway.

The biggest mouse is the hardest to spot,
on far-off land that Disney bought,
but lost its green when an '80s frost
killed off the trees and wasted the cost.
Or so it seemed... but being sly,
Disney planted a clever goodbye.
So start at Walt and Mickey's hub,
zoom out, head west through trees and scrub.
Pass Reedy Lake and head west still
through homes and fields and forests 'til
Highway 27 appears...
Head north and stop when Trout Lake nears.
Cross the lake and there you'll fly
over a mouse-shaped forest seen from the sky.

The story: When a frost in the '80s killed off the orange groves in a 150-acre parcel Disney had purchased northeast of the Magic Kingdom, Disney took it as a chance to act. According to Attractions Magazine, Disney put out a call to Cast volunteers in the early '90s for an unusual project: helping plant pine trees in a 60-acre Mickey-shaped pattern about 30 minutes outside of Walt Disney World!

What started as six inch seedlings grew into a true "forest" visible only from the air (from the ground, it looks... well... like a forest). Though it may seem like a random location, the forest was perfectly aligned to a typical departure route for westbound planes leaving Orlando International Airport – the "Epcot Two" FAA flight plan, making the Mickey forest visible for the right side of the plane. Unfortunately, the land itself was sold years ago to a Jacksonville-based company and the forest itself was removed in 2019... so catch it on Google Maps while you can!

On the last page, we'll lead you to two more GIANT hidden Mickeys – one you've probably stepped on, and one you may never have considered before... Read on!