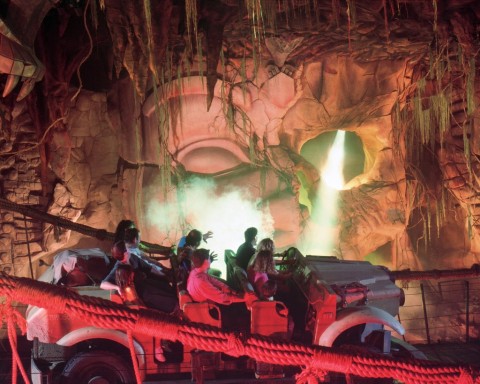 If you look closely, you can find a lot of connective tissue across Disney rides…

Some connections are obvious, like the way Soarin’ Over California at Disney’s California Adventure and Soarin’ Around the World at Epcot are essentially the same attraction retooled for different parks. Other connections come when one ride is built on top of another, like Epcot’s Frozen Ever After (built atop Maelstrom) or Guardians of the Galaxy – Mission: Breakout (built atop California’s Tower of Terror). A third type comes when rides in Disney’s overseas parks reimagine classic attractions. A great example can be found tracing the relationship between the Haunted Mansion, Disneyland Paris’ Phantom Manor, and Hong Kong Disneyland’s Mystic Manor.

However, there are some attractions where the connections are a little more subtle. These aren’t rides that are directly linked. Some may share technology, but the connective tissue of mythology, theming, or history runs deeper. Some of these pairings include what some might call “spiritual successors”—creative works with significant common threads. Others are simply what we would call “cousins”.

There are a lot of these connections to be found throughout Disney parks history. We wanted to focus on a few highlights rather than give an exhaustive survey, so to keep things simple, we eliminated a few categories:

With that in mind, did you realize these Walt Disney World and Disneyland attractions were connected? Some may surprise you…

This is definitely one of the more obvious ones on the list, but it’s also probably the best example of the “spiritual successor” concept. Disneyland’s Matterhorn Bobsleds have been a mainstay at the Happiest Place on Earth since 1959 (just four years after the park opened). It was the first tubular roller coaster ever constructed, and the Matterhorn of yesteryear was much different from the one we know today. The bobsleds required some rather intimate seating (hope you brought a buddy!), the mountain interior was hollow, and the infamous peak was pocked full of holes for the Disneyland Skyway to pass through. Most significantly, the Yeti did not yet exist.

In 1978, the ride underwent a major overhaul which saw the addition of the Yeti and the transformation of the interior to the tunnels we know today. In 1994, even more changes were added, including filling in the holes for the Skyway (which had closed—more on that later). In 2012, the cars were transformed to give each guest a single seat (no more Matterhorn spooning), and it wouldn’t shock us if more upgrades were to come in future years.

In the 80’s and 90’s, it was long rumored that Disney might bring a copy of the Matterhorn either to the Magic Kingdom or, more likely, Epcot for the introduction of a Switzerland pavilion (Disney even drafted concept art for it). Instead, Disney Imagineers did something bolder—they upgraded the Matterhorn in nearly every way by applying its themes to the biggest, baddest mountain on Earth.

Expedition Everest opened in 2006, eight years after Disney’s Animal Kingdom. It didn’t take long for guests to start spotting connections between the two mountain attractions. While the backstories of Expedition Everest and the Matterhorn aren’t directly related, they share a surprising amount of connective tissue. Both rides take place on infamous snowy peaks beloved by climbers (ironically, Expedition Everest doesn’t take place on Everest proper but rather on an imaginary peak called “The Forbidden Mountain”). Both also involve thinly-plausible vehicle choices for their home region-- you’re as unlikely to find bobsleds on the real Matterhorn as mine trains on the real Everest. Both involve expeditions gone awry, right down to abandoned adventurer’s equipment, and both involve a harrowing chase through ice caverns by the terrifying Yeti.

Matterhorn Bobsleds remains an amazing attraction—the Yeti, in particular, remains almost as scary as the day he debuted. Expedition Everest, however, improves on the Matterhorn in a number of ways. It’s a great coaster across the board, and even if the Eddie the Disco Yeti has suffered some serious malfunctions over the years, Everest’s Yeti is absolutely terrifying for his monstrous size. It’s also worth noting that the Yeti hails from Himalayan mythology rather than Alpine lore, meaning the Matterhorn Yeti is quite far from home.

On a side note, you could theoretically connect both of these attractions to two other runaway mine train attraction: Big Thunder Mountain Railroad and the Seven Dwarfs Mine Train!

This was actually the first connection that got me thinking about this article. Star Wars: Rise of the Resistance is quite the hot topic among Disney fans right now, to the point the ride has single-handedly altered established crowd trends at Disney’s US parks. It’s a blasted difficult ride to get onto these days, and I found myself struggling to describe the experience to friends and family who weren’t likely to try it anytime soon.

That is, until I stopped and realized Rise of the Resistance holds a lot in common with another Disney / Lucasfilm classic ride…

Disneyland’s Indiana Jones Adventure (aka Indiana Jones and the Temple of the Forbidden Eye) opened in 1995 and has remained a guest favorite ever since then. The ride was a marvel of technology, and in its own way, it kicked off the ultra-immersive adventure attraction craze we all get to benefit from today. Walt Disney World fans are still wishing upon a star for Florida to get their own version.

Star Wars: Rise of the Resistance is brand, spanking new—so new, in fact, that Disney still hasn’t ironed out all the kinks to keep the ride functioning at maximum capacity. It is undoubtedly Disney’s most ambitious attraction to date, seamlessly interweaving multiple ride systems including a simulator, Pepper’s ghost effects, an interactive walking segment, a trackless vehicle adventure, and a few more secret systems into one cohesive experience.  It’s a whopper of a great attraction, one that defies description in many ways.

The best way I can describe Rise of the Resistance to someone who’s never been on it is to imagine two rides fused together. The first part I would describe as Star Tours with no seats, but the larger portion of the attraction I would compare directly to the Indiana Jones Adventure. Indeed, you could say Star Wars: Rise of the Resistance is basically The Indiana Jones Adventure with no track inside a Star Destroyer. The ride vehicles are even shaped similarly, despite one having a sleek black Star Wars overlay.

There really are quite a few connections between the two rides. Both have Lucasfilm origins. Both feature strong theming in their queue areas, including secret activities guests can engage in while waiting—for Star Wars: Rise of the Resistance, this involves playing the Star Wars Datapad game to help Finn through a preliminary mission. For the Indiana Jones Adventure, guests who visited the attraction early on were given special cards to help them decode the cryptic writing scrawled throughout the temple walls. Both attractions feature a pre-show that fills in important details setting up your adventure, and both follow similar beats throughout the high-speed adventure portion of the ride. Both even involve… erm… perilous objects protruding from the ceiling…

Interestingly, Star Wars: Rise of the Resistance isn’t the only attraction which carries an Indiana Jones Adventure connection…

Dinosaur at Disney’s Animal Kingdom was once, hands down, one of the scariest rides at Walt Disney World (second only to the ExtraTERRORestrial Alien Encounter, which in turn connected to The Great Movie Ride due to the Alien segment). Disney’s Dinosaur film wasn’t out yet—the ride opened in 1998 as Countdown to Extinction, and it was an absolute thrill-fest. The ride interior was much darker, the effects were insanely loud, and a meteor even nearly plowed directly into your vehicle. After Disney’s Dinosaur was released, the company decided to rename the ride and tone back the scariness a little bit.

It doesn’t take a rocket scientist to tell that Dinosaur and the Indiana Jones Adventure share similar ride systems and vehicles. However, the connection between the two rides runs all the way down to the bones…

Dinosaur is built in an exact clone of the track for the Indiana Jones Adventure from Disneyland.

This is a little different from the Maelstrom / Frozen Ever After scenario—Walt Disney World has never had a version of The Indiana Jones Adventure. They built a complete copy of the track from scratch. The set dressing is different, and the ride is programmed to follow slightly different pacing, but the tracks are the same. Both rides feature strong thrill elements including near death by a looming reptile, flames and death all around, and inspiring pants-peeing terror across generations. The biggest difference is that as Dinosaur has waned in popularity, the Indiana Jones Adventure remained a fan favorite. Many have speculated that Disney may one day take the plunge and simply convert Dinosaur into a Florida version of The Indiana Jones Adventure, but these rumors have remained unsubstantiated so far.

This is another one that I realized after trying to describe the ride to a friend. If you stop to think about it, Avatar Flight of Passage really is almost like Soarin’ if your hang glider were replaced with a banshee.

Similar to the connections between the Matterhorn Bobsleds and Expedition Everest, Avatar Flight of Passage really can be viewed as a spiritual successor to both versions of Soarin’. Flight of Passage takes the immersive technology and sensations of flight we all came to love in Soarin’ and launches them to new heights (quite literally). The addition of virtual reality and 3D technology allowed Imagineers to make Flight of Passage even more immersive than Soarin’, even as they kept similar tools like use of an ultra-huge screen and the use of scents to match the flora below. Both rides feature similar gentle tones, sweeping landscapes, and of course, the breathtaking sensation of flight.

In a way, you could say Avatar Flight of Passage is simple “Soarin’ Over Pandora”.