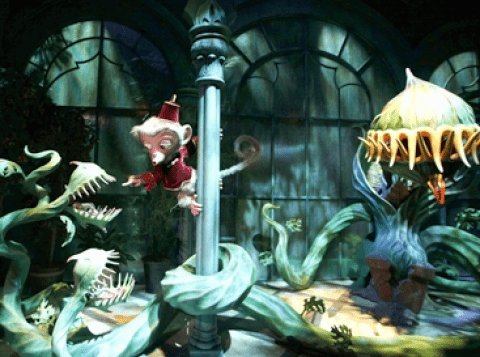 For the better part of a century, designers have been racing toward the next best thing in ride system technology... From simple carts powered by electric bus-bars, to high-capacity boat-based dark rides; from the continuously-moving Omnimover to the debut of Disney's Enhanced Motion Vehicle (EMV) in 1995 that makes guests the center of the action... At each step of the way, evolutions in ride system technology have changed the ways that designers can tell stories.

But when we looked at the Seven Modern Wonders of the Theme Park World, one cutting edge technology stands out as the way of the future: rides untethered by tracks entirely. A new generation of trackless rides allow vehicles to do what once seemed impossible: to make choices; to diverge down new paths; to spin and dance around one another in precisely-calibrated near-collisions; to become alive.

From the simplest trackless tech (often using sensors tracking a wire embedded in the ground) to Wifi-controlled attractions and the spectacular LPS (local positioning system – that is, a micro-version of global GPS), the possibilities of going trackless are spectacular; but so are the risks. Applying this cutting edge technology doesn't guarantee a winner...

Today, we'll count down the planet's biggest trackless dark rides from worst to best. Which rides do you think will come out on top? To help tell the tales of these larger-than-life technological dark rides, we'll include a point-of-view video of each, shot by our friends at SoCal Attractions 360 (whose low-light videos often capture more than the human eye can)!

Though most wouldn’t have believed it even a few decades ago, the Middle East has become a hotspot for theme parks. In December 2016, MOTIONGATE Dubai became one of the latest, bringing an odd mix of intellectual property from the Hunger Games series and The Green Hornet to The Smurfs and an entire Dreamworks area. A section dedicated to Columbia Pictures brings a depressingly bad Ghostbusters shooting dark ride, a Zombieland drop tower, and a trackless dark ride based on Hotel Transylvania.

And boy, is it bad. The Hotel Transylvania action mostly takes place in a large central scene with offshoot vignettes in the smaller rooms off the sides. Despite the frantic and fast-paced music, the ride creeps (no pun intended) through scenes populated by static mannequins. What could feel like a zippy, wild, out-of-control ruckus through the hotel is instead almost painfully dull. We dare you to stay tuned to the ride through video without skipping ahead!

We know, we know. “If you can’t say anything nice, don’t say anything at all.” Which is why we’ll at least offer that the ingredients of a compelling ride are here, including some nice scenic design and the unusual (if accidental) fact that the figures and action all take place on the same level as the ride vehicle rather than on obvious lifted stages. Put another way, we can see that Hotel Transylvania could’ve been a really great ride with a higher budget – with fittingly frantic pace, spinning vehicles, and a few real animatronics here and there rather than mere mannequins. As it is, it’s definitely the worst of the major trackless dark rides out there.

Like Motiongate, Warner Bros. World is a product of the industry’s shift toward the Middle East and Asia. But this particular park is especially impressive, bringing lands themed to Gotham City and Metropolis (Batman and Superman, respectively), Bedrock (The Flintstones), Dynamite Gulch (Roadrunner and Wile E. Coyote), and Cartoon Junction.

The latter contains Scooby Doo: Museum of Mysteries. Scooby is no stranger to dark rides, given licensing through Sally Corp. that has seen a dozen or more ghost-blasting interactive rides across Six Flags and Cedar Fair parks over the years. But Museum of Mysteries reimagines Mystery Inc. within a trackless dark ride! Twice during the attraction, the vehicles take Fred’s advice (“Let’s split up, gang!”) and pull into personalized scenes.

Of course, the Museum of Mysteries is still relatively simple compared to the kinds of rides you’d find at Disney or Universal, but it’s evidence that the trackless ride technology doesn’t always have to be a showstopping, motion-simulating, attention-grabbing attraction unto itself. In this case, the trackless aspect is hidden away and downplayed, simply used to make a classic dark ride feel more personal!

9. Empire of the Penguin

Beginning in 2000, Disney’s development of the modern trackless dark ride created sensational, outstanding, next generation dark rides… just, not in the U.S. Few would’ve expected that SeaWorld would be the first to bring the technology stateside, but that’s precisely what happened. In 2013, SeaWorld Orlando threw its hat into the “Wizarding World” ring with Antarctica, a rockwork-encircled 4-acre land with the Empire of the Penguin attraction as its centerpiece.

Placing a 3-degree-of-motion platform atop the trackless vehicle base, the ride cleverly offers both “Mild” and “Wild” ride programming – a neat show of the ride system’s versatility. Unfortunately, neither provides the sensational experience industry insiders hoped for. Despite concept art showing vehicles sliding around a bright and endless Arctic expanse, the Empire of the Penguin ride is quite short.

Four vehicles at a time are dispatched into a cavern of icy bubbles, viewing the first steps of a young gentoo penguin named Puck. From there, two vehicles dance around a cavern with a frozen waterfall as its centerpiece. Then, they enter a brief (and unfortunately ineffective) “simulator” before the ride’s highlight: coming face to face with the park’s real penguins. They then enter the open air (and frigid!) penguin exhibit where guests disembark.

Though the opening day dark rides at Motiongate Dubai all have a particular… slowness to them, the park has improved since! Take Shrek’s Merry Fairytale Journey. A clever twist on the otherwise straight “book report,” the ride casts guests as attendees at Shrek and Fiona’s puppet show retelling of their love story. As a result, the figures within are mostly “puppet” style (which smartly excuses their lack of realism). But the ride is also quite well done with some clever projection effects, impressive lighting, and some scenes well beyond what Hotel Transylvania would have you expect.

What’s more, the ride is nearly 10 minutes long – quite a bit longer than even the longest ride at Universal Orlando, for example. As a matter of fact, we wouldn’t complain if this exact attraction were plucked from the UAE and placed at Universal Studios Florida! It’s the kind of screen-free, family dark ride Universal needs more of, and a property Universal now owns, at that!

When Universal Studios Florida opened in 1990, the park’s focus on creature-feature epic encounter rides culled from Hollywood’s Studio Tour made it a favorite of families with teens. Among the movie park’s most iconic attractions was the Lost Legend: Kongfrontation. On board, guests became New Yorkers boarding the Roosevelt Island Tram to escape from the rampaging ape. Amid the wild destruction, guests encountered Kong in two raging Audio-Animatronics interactions.

Just after the New Millennium, Universal began an aggressive campaign to reinvigorate its movie park with more modern hits. Kong was one of the first to fall, making room for the Modern Marvel: Revenge of the Mummy. Just over a decade later, Universal announced the return of the king… but instead of setting Kong loose in our world, this time we’d be dropped into his. A better fit for the more mythical and literary Islands of Adventure park, the new Skull Island strands guests on the desolate, dark home island of Kong alongside the Eighth Wonder Expedition Company.

Most fans agree that Skull Island doesn’t quite live up to its legendary predecessor. But what is impressive about the ride is its vehicle. Its enormous, lumbering, 72-passenger expedition trucks aren’t just trackless transports that travel indoors and out: each vehicle has a different on-board driver and narrator brought to life by an on-ride animatronic!